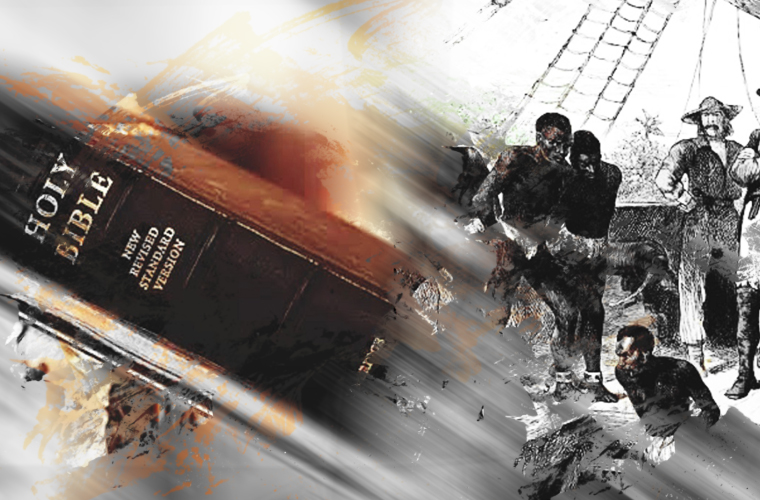 Throughout the history of mankind, there have been various accounts of man’s enslavement by his fellow man. Stories of brutality and wickedness of one race to another, one class of people to the other, and one religion to the other.

In all accounts of slavery, no human group, class, or race endorses brutality on her own people. Everyone frowns at slavery that has been meted out on their own kind, but somehow sees nothing wrong in the brutal enslavement of other groups of people.

So, it baffles me when the Bible, a supposed “word of God”, has numerous verses that endorse man’s exploitation, brutality, and enslavement of another race of humans.

This article touches home because the African people (Black people) has suffered more enslavement at the hands of their fellow man, and somehow these same Africans seem to be obsessed with the Bible, which endorses the persecution and suffering that they endured for over 400 years at the hands of Europeans and Arabs.

The African Christian remains one of the major upholders of the European subjugation of the African man. The African Christian is the one who beliefs that Africans are nothing without white people’s intervention and direction. He believes that they are superior to Black people since Jesus was a white man (or was brought by white men).

The African Christian cares little or nothing for other sources of his history. The only book he trusts and reads is the Bible. The same Bible which endorses his slavery to the white man.

Often times, when the horrendous experiences of African enslavement are shared, many people around the world (especially young Black people), are left wondering, what inspired the Europeans to treat Africans the way they did during the centuries of slavery. Well, the BIBLE gave them the morale boost. It was the word of God – a white looking God (according to how they made him).

Below are the Bible verses which endorse the enslavement of humans:

Ephesians 6:5, “Slaves obey your earthly masters with respect and fear and sincerity of heart, just as you would show to Christ.”

Here the Bible says for slaves to obey their master as if he was God himself.

1 Timothy 6:1, “All who are under the yoke of slavery should regard their masters as fully worthy of honor so that God’s name and our teaching will not be discredited.”

In this verse, God says that slaves should honor their masters in the name of God.

Here God (and those who knocked the Bible together) describes how to become a slave for life, and shows that it is completely acceptable to separate slaves from their families. God also shows that he completely endorses the branding of slaves through mutilation.

Exodus 21:7, “If a man sells his daughter into slavery, she will not go out the way male slaves do.”

In this verse, the God of the Christians allows a father to sell his own children into slavery. Very noble indeed.

Exodus 21:20, “If a man beats his male or female slave with a rod and the slave dies as a direct result, he must be punished, but he is not to be punished if the slave gets up after a day or two since the slave is his property.”

Not only does the God of the Christians condone slavery, but he is also completely comfortable with the concept of beating your slaves with, as long as you don’t kill them.

Leviticus 19:20, “If a man lies sexually with a woman who is a slave, assigned to another man and not yet ransomed or given her freedom, a distinction shall be made. They shall not be put to death, because she was not free.”

Here the Christian God says it’s alright for men to have sex with slave women in which would not be considered as rape because the slave woman has no rights so the man will not be punished.

Exodus 21:32, “If the bull gores a male or female slave, the owner must pay thirty shekels of silver to the master of the slave, and the bull must be stoned.”

Here, not only does the Christian God condone slavery, but here God places a value on slaves as 30 shekels of silver.

Leviticus 25:44, “Your male and female slaves are to come from the nations around you; from them, you may buy slaves. You may also buy some of the temporary residents living among you and members of their clans born in your country, and they will become your property. You can will them to your children as inherited property and can make them slaves for life, but you must not rule over your fellow Israelites ruthlessly.”

Here the Bible clearly states where you can purchase your slaves, and also specifies that slaves are property to be bought, sold, and handed down. Isn’t that glorious?

1 Peter 2:18, “Servants be subject to your masters with all respect, not only to the good and gentle but also to the unjust.”

In this verse, the Bible says to respect all masters, even the unjust ones. Beatings are alright as long as the slave is not killed.

Deuteronomy 21:10, “When you go forth to battle against your enemies, and the Lord your God delivers them into your hands, you may carry them away as a captive into slavery.”

In this verse, the Christian Bible says that the losers of a battle may be taken hostage as slaves.

Deuteronomy 23:15, “You shall not give up to his master a slave who has escaped from his master to you.”

Here God says that whoever has the slave owns the slave and doesn’t address why the slave ran away in the first place even if from brutality.

Titus 2:9, “Bid slaves to be submissive to their masters and to give satisfaction in every respect; they are not to be refractory, nor to pilfer, but to show entire and true fidelity.

Once again, the Bible and their God in it, shows that he is quite in love with the idea and practice of slavery.

These Bible texts confirm our previous article which clearly shows how the Romans (Europeans) fabricated the Bible, by initially plagiarizing ancient African spirituality, and replacing the characters with European ones.

Texts like the verses mentioned above show us that the Bible was indeed written by mortal men and had nothing to do with the inspiration of the Holy Spirit. If this is how the God and Holy spirit which the Europeans brought think of humans, then Africans should have nothing do with them, since the word of the “God” is essentially the motivation and principle used in the enslavement of Black people, by Europeans.

This article is meant to get you thinking. It is meant to get you to question the very tenets of the European religion and faith you hold so dearly today. But in a case where you insist the Bible is the word of God and is the truth, then we must conclude that you condone slavery, and support every evil that your ancestors suffered at the hands of the Europeans, who raped, killed, maimed, and tortured Africans while praying with the same Bible the following morning.