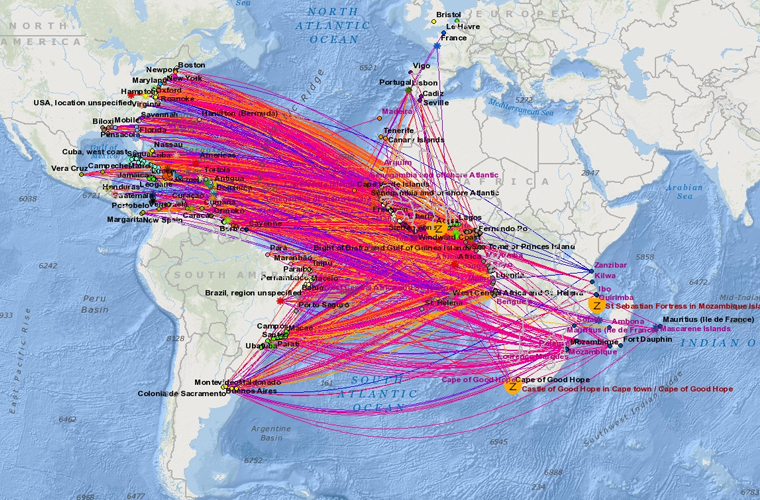 Countless local and regional slave trades in Europe, Africa, and the Americas combined to create the transatlantic slave trade an ever-evolving system of people, ships, and goods that deported at least 12.5 million Africans toward destinations in Europe and the Americas over a period of 366 years.

The forced migration of African captives relied upon three complex, intertwined systems that married the interests of European and American investors, traders, and planters with those of African merchants and leaders. Investors in such port cities as Bristol, Nantes, and Salvador da Bahia established Atlantic circuits along which their vessels could obtain captive laborers to supply commercial plantations, mines, or factories in the Americas. A second and equally complex system created by African traders and leaders moved captives from nearly all regions of the African interior to coastal markets, where the two systems tragically merged and gave life to one another. A third system joined the others in the Americas, as merchants purchased newly arrived Africans in New World ports and carried them to secondary markets in overland or intercolonial maritime trades that extended the horrific journeys of captives for weeks, months, or even years.

Nearly one-third of all slave voyages were outfitted in Liverpool, London, Bristol, and other ports in Britain. French vessels from such ports as La Rochelle, Le Havre, Bordeaux, and Nantes made up another 13 percent. In the Americas, a number of slave ships were sent from the British Caribbean and Rhode Island in North America, and in the nineteenth century, especially, from the Brazilian port cities of Recife, Salvador da Bahia, and Rio de Janeiro. All told, 90 percent of captives deported in the transatlantic slave trade were carried in ships from Brazil, Britain, France, Portugal, and the Netherlands.

Just as the circulation of European and American slave ships shifted according to supplies, prices, and political alliances, the movement of captives toward African coastal markets varied in scale and direction from place to place and over time. In nearly all instances, however, the sale of enslaved people to European traders was the result of a long and arduous journey through an extensive network of traders in the African interior.

In Senegambia, for example, where Europeans purchased 6 percent of all captives in the transatlantic slave trade, enslaved people came from an immense area of West Africa that stretched from coastal regions drained by the Sénégal and Gambia Rivers to the mountainous Futa Toro, Futa Bundu, and Futa Jalon, and farther east to settlements in the Sahel. In Senegambia, as in other regions, the transport of more than 750,000 captives over land and water required an intricate system of auxiliary traders in food and supplies, who literally kept the slave trade alive along with its far-flung routes to the sea.

Along the Gold Coast, which supplied 10 percent of all transatlantic captives, dozens of European forts and factories tapped into markets of enslaved people who found themselves at the coast only after being sold and transported by any number of middlemen beginning as far north as the Sahel region (in today’s Burkina Faso). For these people, their transatlantic journey would be yet another passage to endure since their initial enslavement weeks, months, or years earlier.

Likewise, in Central Africa, where nearly half of all transatlantic captives originated, those forced upon ships in Luanda or along the Congo River came from increasingly distant parts of the interior. People sold from the Atlantic ports of Cabinda and Loango had also traveled great distances, their movement from the interior tied to local auxiliary trades in ivory or salt or, to a greater degree, the arrival of European goods exchanged at the coast and transported east. In this way, the movement of people toward the Central African coast mirrored a reciprocal trade in European goods in the opposite direction.

African captives who survived the Middle Passage were scattered across ports throughout the Americas. Scholars have identified 179 such ports, where more than 11 million Africans were transported by European slavers. But twenty of those ports received more than eight million Africans. In Brazil, 1,839,000 landed in Rio de Janerio and a further 1,550,000 in Salvador de Bahia. Kingston, Jamaica received 886,000 Africans, and 493,000 landed at Bridgetown, Barbados. Cap-Français in Saint-Domingue (now Haiti) was the disembarkation point for 406,000 Africans, and Charleston, South Carolina (United States) 186,000.

These Atlantic ports were the points where enslaved Africans entered the third massive system that shaped the transatlantic slave trade. African arrivals were often quickly sold to planters or speculators on their way toward their final workplace. American colonists in frontier settlements of the Caribbean islands, the backcountry of the Carolinas in North America, and in the vast Brazilian interior demanded agricultural, domestic, and skilled laborers for their economic prosperity. If the Middle Passage served as the transatlantic slave trade’s central artery, the elaborate networks of roads, paths, and waterways in the Americas that transported enslaved people from ports to plantations, mines, and cities were the capillaries—much like the slave routes on the African continent that had ensnared the captives in the first place.

Slave traders forced newly arrived Africans in Buenos Aires, Argentina, to trek across the continent to what became Bolivia, Ecuador, and Chile—a distance of more than 4,000 kilometers. Traders transported enslaved people from island to island within the Caribbean, then from one location to another on the larger islands in Jamaica, Cuba, and Saint-Domingue, as new settlements and crops opened up interior locations.

What this meant was that colonial slave traders developed complex internal slave trading systems throughout the Americas. Some of them were longer and more protracted than the perilous Atlantic Ocean crossing.

Thus, the forced migrations of Africans and their descendants neither began nor ended with the Middle Passage (though more than 1.5 million Africans died during the Atlantic crossing). Millions of enslaved people were shifted against their will, without their loved ones or visible reminders of home—first in Africa, then across the Atlantic, and in final passages throughout the Americas.