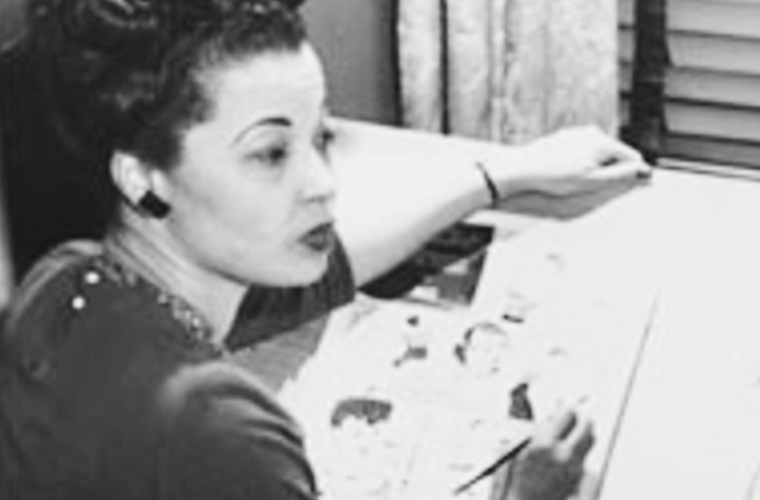 Future artist Jackie Ormes was born Zelda Mavin Jackson on August 1, 1911, in Pittsburgh, Pennsylvania, to Mary Brown and William Winfield Jackson. After their father died from a car accident, Ormes and her older sister Delores eventually relocated to the area of Monongahela upon their mother’s remarriage. The two sisters enjoyed creative pursuits: Delores went on to become a Decca Records vocalist while Ormes developed a passion for illustration. She was tapped to handle art duties for the Monongahela High yearbook during her junior and senior years, displaying an on-the-page wit that would become her trademark. It was also during her youth that Ormes began to be called “Jackie,” a shortened version of her family name.

Jackie married Earl Clark Ormes in 1931. Due to financial difficulties associated with the Great Depression, the couple relocated to Salem, Ohio, for a time to live with Earl’s family before moving to Chicago, Illinois. The couple also had a daughter, Jacqueline, who passed away from a brain tumor at only 3 years old.

While still in high school, Ormes applied to the Pittsburgh Courier, an African-American weekly newspaper, and initially worked as a reporter and proofreader. Then on May 1, 1937, she debuted the comic strip Torchy Brown in “Dixie to Harlem,” which the Courier ran for a full year. Torchy Brown told the story of a young Mississippi woman who decides to honor her zest for adventure by going north to become a star at the Cotton Club. The strip’s debut made Ormes the first African-American woman to become a professional newspaper cartoonist.

When the couple relocated to the Windy City, Earl went into hotel management. Jackie took classes at the School of the Art Institute of Chicago and briefly penned a society column for The Chicago Defender in the mid-1940s. At the Defender she debuted her next big work, Candy, depicting a wisecracking, sultry domestic worker. The single panel cartoon ran for four months in 1945.

In September of 1945, Ormes returned to the Courier with what would become her longest running comic, Patty-Jo ‘n’ Ginger. Another ongoing one-panel venture, the series featured little sister Patty-Jo, known for politically scathing commentary, with big sister Ginger, a silent, beautiful foil. The cartoon ran for 11 years and inspired Ormes to create a Patty-Jo doll in collaboration with the Terri Lee Company. Ormes also returned to one of her former characters with the Torchy in Heartbeats strip, which began in 1950 and ran for four years.

Jackie Ormes’s one-panel comic ‘Candy,’ featuring a vivacious, witty domestic worker, ran for four months in 1945 in ‘The Chicago Defender.’ This was followed later in the year by ‘Patty-Jo ‘n’ Ginger,’ a comic that ran in the ‘Pittsburgh Courier’ until 1956, showcasing a wisecracking girl and her silent, sultry older sibling.< Outside of being a trailblazer for women, Ormes established a voice within her work that was provocative for its time. In an unabashedly middle-class setting, the beyond-her-years Patty-Jo took on everything from segregation, interracial heritage, the Red Scare and free speech along with frothier fare that included fashion trends and her sister’s dating life. The Torchy in Heartbeats series would also showcase how environmental degradation can impact poor black communities way before the topic was deemed newsworthy.

Even with such serious themes, Ormes was still able to celebrate fashion, glamour and the female physique. Believed to be modeled after Ormes herself, characters such as Torchy Brown (who eventually had a paper doll series), Candy and Ginger often struck alluring, elegant pin-up poses in contrast to the more demeaning black female stereotypes of the day.

After her Patty-Jo ‘n’ Ginger series ended in 1956, Ormes increasingly turned her attention to community activist/civil rights work and coordinating fashion shows. (The artist had impeccable style.) Beginning in the late 1940s, the FBI had created a large file on Ormes due to her attendance at events perceived as having Communist Party ties. Ormes was not a member of the party.

Ormes suffered from rheumatoid arthritis in her later years, which would eventually impact her ability to draw. She died from a cerebral hemorrhage on December 26, 1985. More than two decades later, the University of Michigan Press published the book Jackie Ormes: The First African American Woman Cartoonist, by Nancy Goldstein (2008). The DuSable Museum of African American History, which Ormes helped found, also houses her papers.