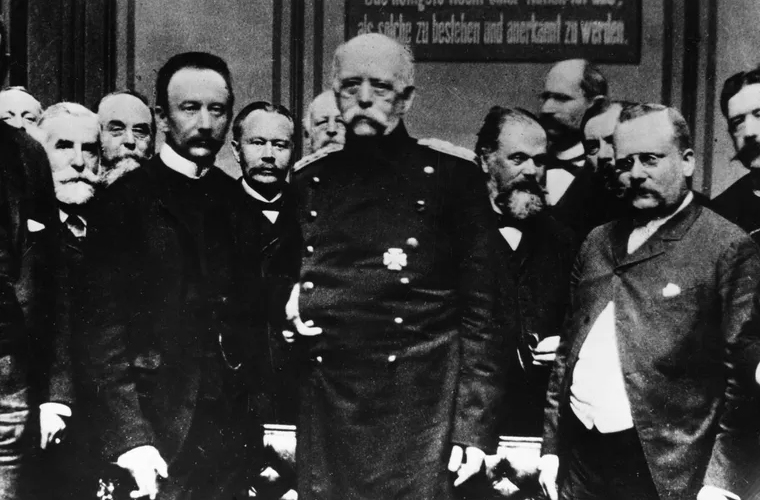 Otto von Bismarck (April 1, 1818–July 30, 1898), a son of the Prussian aristocracy, unified Germany in the 1870s. And he actually dominated European affairs for decades through his brilliant and ruthless implementation of realpolitik, a system of politics based on practical, and not necessarily moral, considerations.

Bismarck started out as an unlikely candidate for political greatness. Born April 1, 1815, he was a rebellious child who managed to attend university and become a lawyer by the age of 21. But as a young man, he was hardly a success and was known for being a heavy drinker with no real direction in life.

From Atheism to Religion

In his early 30s, he went through a transformation in which he changed from being a fairly vocal atheist to being quite religious. He also married, and became involved in politics, becoming a substitute member of the Prussian parliament.​

Throughout the 1850s and early 1860s, he advanced through several diplomatic positions, serving in St. Petersburg, Vienna, and Paris. He became known for issuing sharp judgments on the foreign leaders he encountered.
In 1862 Prussian king Wilhelm wanted to create larger armies to effectively enforce Prussia’s foreign policy. The parliament was resistant to allocate the necessary funds, and the nation’s war minister convinced the king to entrust the government to Bismarck.
Blood and Iron

In a meeting with legislators in late September 1862, Bismarck made a statement that would become notorious: “The great questions of the day will not be decided by speeches and resolutions of majorities…but by blood and iron.”

Bismarck later complained that his words were taken out of context and misconstrued, but “blood and iron” became a popular nickname for his policies.

In 1864 Bismarck, utilizing some brilliant diplomatic maneuvers, engineered a scenario in which Prussia provoked a war with Denmark and enlisted the help of Austria, which derived little benefit itself. This soon led to the Austro-Prussian War, which Prussia won while offering Austria fairly lenient surrender terms.

Prussia’s victory in the war allowed it to annex more territory and greatly increased Bismarck’s own power.

A dispute arose in 1870 when the vacant throne of Spain was offered to a German prince. The French were concerned about a possible Spanish and German alliance, and a French minister approached Wilhelm, the Prussian king, who was in the resort town of Ems.

Wilhelm, in turn, sent a written report about the meeting to Bismarck, who published an edited version of it as the “Ems Telegram.” It led the French to believe that Prussia was ready to go to war, and France used it as a pretext to declare war on July 19, 1870. The French were seen as the aggressors, and the German states sided with Prussia in a military alliance.

The war went disastrously for France. Within six weeks, Napoleon III was taken prisoner when his army was forced to surrender at Sedan. Alsace-Lorraine was overtaken by Prussia. Paris declared itself a republic, and the Prussians besieged the city. The French eventually surrendered on January 28, 1871.

The motivations of Bismarck were often not clear to his adversaries, and it’s commonly believed that he provoked the war with France specifically to create a scenario in which the South German states would want to unify with Prussia.
Bismarck was able to form the Reich, a unified German empire led by the Prussians. Alsace-Lorraine became an imperial territory of Germany. Wilhelm was declared Kaiser or emperor, and Bismarck became chancellor. Bismarck was also given the royal title of the prince and awarded an estate.

Chancellor of the Reich

From 1871 to 1890 Bismarck essentially ruled a unified Germany, modernizing its government as it transformed into an industrialized society. Bismarck was bitterly opposed to the power of the Catholic Church, and his kulturkampf campaign against the church was controversial but ultimately not entirely successful.

During the 1870s and 1880s, Bismarck engaged in a number of treaties that were considered diplomatic successes. Germany remained powerful, and potential enemies were played off against each other. Bismarck’s genius lay in being able to maintain the tension between rival nations, to the benefit of Germany.

Fall From Power and Death

Kaiser Wilhelm died in early 1888, but Bismarck stayed on as chancellor when the emperor’s son, Wilhelm II, ascended to the throne. But the 29-year-old emperor was not happy with the 73-year-old Bismarck.

The young Kaiser Wilhelm II was able to maneuver Bismarck into a situation in which it was publicly stated that Bismarck was retiring for reasons of health. Bismarck made no secret of his bitterness. He lived in retirement, writing and commenting on international affairs, and died in 1898.

The judgment of history on Bismarck is mixed. While he unified Germany and helped it become a modern power, he did not create political institutions that could live on without his personal guidance. It has been noted that Kaiser Wilhelm II, through inexperience or arrogance, essentially undid much of what Bismarck accomplished, and thereby set the stage for World War I.

Bismarck’s imprint on history has been stained in some eyes as the Nazis, decades after his death, attempted at times to portray themselves as his heirs. Yet historians have noted that Bismarck would have been horrified by Nazis.
previous post

Aunt Jemima: It was Never About the Pancakes