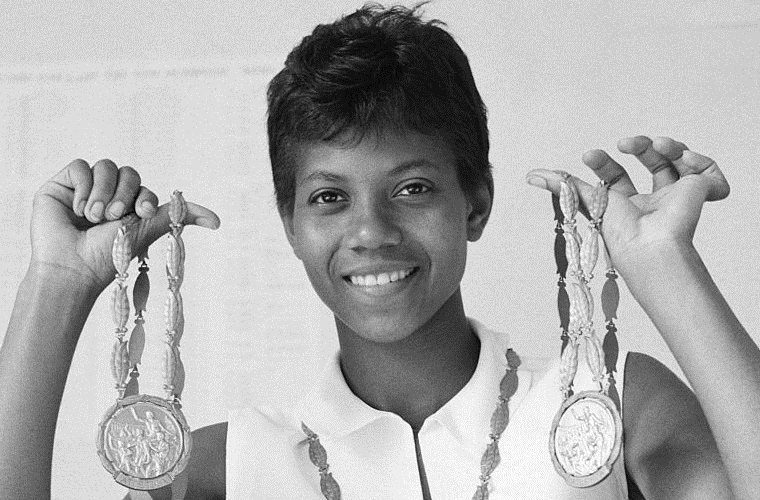 Rudolph was sickly as a child and could not walk without an orthopedic shoe until she was 11 years old. Her determination to compete, however, made her a star basketball player and sprinter during high school in Clarksville, Tennessee. She attended Tennessee State University from 1957 to 1961. At age 16 she competed in the 1956 Olympic Games at Melbourne, Australia, winning a bronze medal in the 4 × 100-meter relay race. In 1960, before the Olympic Games at Rome, she set a world record of 22.9 seconds for the 200-meter race. In the Games themselves she won gold medals in the 100-meter dash (tying the world record: 11.3 seconds), in the 200-meter dash (see photograph), and as a member of the 4 × 100-meter relay team, which had set a world record of 44.4 seconds in a semifinal race. She was Amateur Athletic Union (AAU) 100-yard-dash champion (1959–62).

Her strikingly fluid style made Rudolph a particular favorite with spectators and journalists. She won the AAU’s 1961 Sullivan Award as the year’s outstanding amateur athlete. After retiring as a runner, Rudolph was an assistant director for a youth foundation in Chicago during the 1960s to develop girls’ track-and-field teams, and thereafter she promoted running nationally. She was named to the National Track & Field Hall of Fame in 1974, the International Sports Hall of Fame in 1980, and the U.S. Olympic Hall of Fame in 1983, in the first group of inductees. Her autobiography, Wilma, was published in 1977.