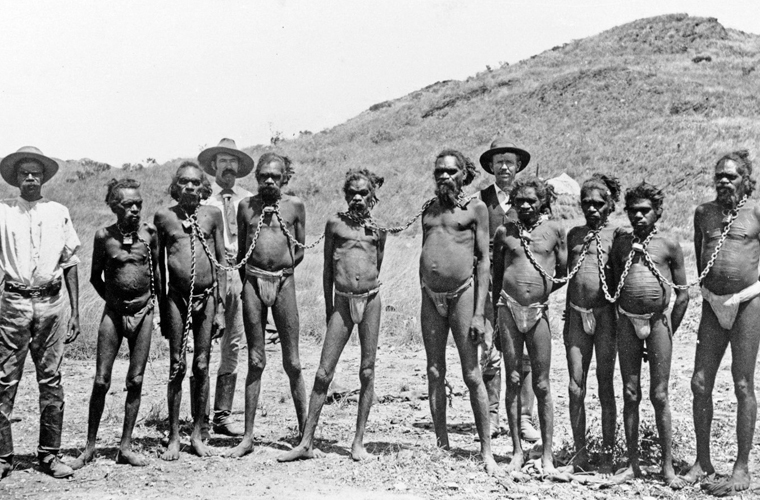 This picture is taken in the early 1900s at the Wyndham prison. Wyndham is the oldest and northernmost town in the Kimberley region of Western Australia. It was established in 1886 as a result of a gold rush at Halls Creek. However, the circumstances and the story behind this picture remain unknown. The Aboriginals could have been arrested under the various local laws passed that forbid them from entering or being within a certain distance of named towns. They could also have been arrested for drinking or owning firearms which were illegal for them at various times. It’s also possible that they have been rounded up to be moved to reserve areas which were being created at the time and that these individuals did not want to move. It could even be a staged picture for tourists/publicity reasons.

In the 19th century, Australia each prisoner carried an iron chain around his neck (weighing approximately 5 pounds – 2.3 kg) in the open where temperatures usually ranged between 35 and 45 degrees Celsius. It was secured by a padlock and individual prisoners were then chained to another man. Chains of prisoners had as many as nine or ten men attached to each other. Later a new method of chaining Aboriginal prisoners was decided upon. They were to be chained from the ankles, the chain was to pass inside the leg of the prisoners trousers and supported by a heavy belt around the waist. Prisoners could then be chained in pairs and “allowed” to work outside the prison walls. There were iron rings bolted to the walls of some jail cells where prisoners were believed to be chained for chained for prison discipline.

While the Indigenous people of Australia were subject to forced labor and experienced slavery-like conditions, there was no slave trading. By the time that the British effectively subdued the indigenous Australian population slave trading was already illegal in the British Empire. Moreover, there was no need. While there was a manpower shortage in the early colonial settlements, the colonial government responded by making convict labor available to private individuals.