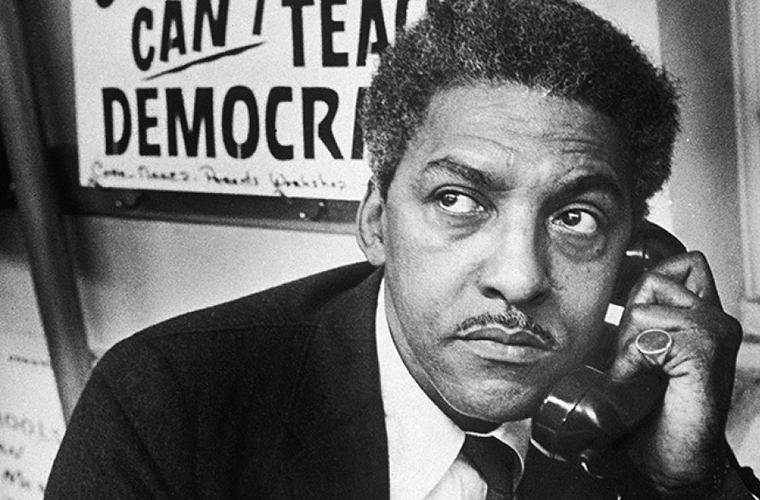 Bayard Rustin was a civil rights organizer and activist, best known for his work as an adviser to Martin Luther King Jr. in the 1950s and ’60s. Bayard Rustin was born in West Chester, Pennsylvania, on March 17, 1912. He moved to New York in the 1930s and was involved in pacifist groups and early civil rights protests. Combining non-violent resistance with organizational skills, he was a key adviser to Martin Luther King Jr. in the 1960s. Though he was arrested several times for his own civil disobedience and open homosexuality, he continued to fight for equality. He died in New York City on August 24, 1987.
Bayard Rustin was born on March 17, 1912, in West Chester, Pennsylvania. He had been raised to believe that his parents were Julia and Janifer Rustin, when in fact they were his grandparents. He discovered the truth before adolescence, that the woman he thought was his sibling, Florence, was, in fact, his mother, who’d had Rustin with West Indian immigrant Archie Hopkins.Rustin attended Wilberforce University in Ohio, and Cheyney State Teachers College (now Cheney University of Pennsylvania) in Pennsylvania, both historically black schools. In 1937 he moved to New York City and studied at City College of New York. He was briefly involved with the Young Communist League in the 1930s before he became disillusioned with its activities and resigned.
In his personal philosophy, Rustin combined the pacifism of the Quaker religion, the non-violent resistance taught by Mahatma Gandhi, and the socialism espoused by African-American labor leader A. Philip Randolph. During the Second World War, he worked for Randolph, fighting against racial discrimination in war-related hiring. After meeting A. J. Muste, a minister, and labor organizer, he also participated in several pacifist groups, including the Fellowship of Reconciliation.Rustin was punished several times for his beliefs. During the war, he was jailed for two years when he refused to register for the draft. When he took part in protests against the segregated public transit system in 1947, he was arrested in North Carolina and sentenced to work on a chain gang for several weeks. In 1953 he was arrested on a morals charge for publicly engaging in homosexual activity and was sent to jail for 60 days; however, he continued to live as an openly gay man.

By the 1950s, Rustin was an expert organizer of human rights protests. In 1958, he played an important role in coordinating a march in Aldermaston, England, in which 10,000 attendees demonstrated against nuclear weapons.

Rustin met the young civil rights leader Dr. Martin Luther King Jr. in the 1950s and began working with King as an organizer and strategist in 1955. He taught King about Gandhi’s philosophy of non-violent resistance and advised him on the tactics of civil disobedience. He assisted King with the boycott of segregated buses in Montgomery, Alabama in 1956. Most famously, Rustin was a key figure in the organization of the March on Washington for Jobs and Freedom, at which King delivered his legendary “I Have a Dream” speech on August 28, 1963.In 1965, Rustin and his mentor Randolph co-founded the A. Philip Randolph Institute, a labor organization for African-American trade union members. Rustin continued his work within the civil rights and peace movements and was much in demand as a public speaker.
Rustin received numerous awards and honorary degrees throughout his career. His writings about civil rights were published in the collection Down the Line in 1971 and in Strategies for Freedom in 1976. He continued to speak about the importance of economic equality within the Civil Rights Movement, as well as the need for social rights for gays and lesbians.Bayard Rustin died of a ruptured appendix in New York City on August 24, 1987, at the age of 75.
previous post