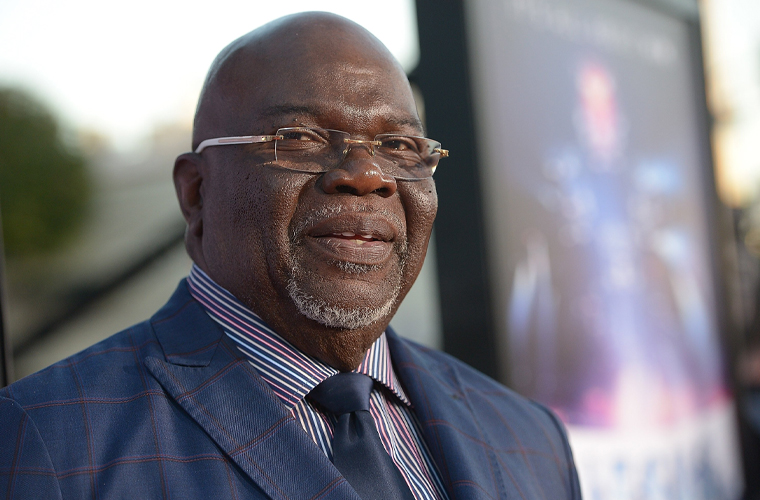 Bishop T.D. Jakes, Sr., was born on June 9, 1957, in South Charleston, West Virginia, to businessman and entrepreneur Ernest, Sr. and educator Odith. The youngest of three children, Jakes was known in his community as “the Bible boy.” However, due to his slight lisp, he was told he would never preach. When Jakes was ten years old, his father developed kidney failure. Jakes and his mother cared for him until his death in 1973. Jakes preached his first sermon in 1976 and was officially ordained in 1979. He met his wife Serita Ann Jamison while guest preaching at her neighborhood church. In 1981, the two were married. In 1980, at the age of 23, Jakes established the Temple of Faith Church in Montgomery, West Virginia, a storefront church with only ten members. Jakes worked simultaneously at the Union Carbide to keep his ministry afloat. Friends International Christian University awarded Jakes his B.A. degree in biblical studies in 1985, his M.A. degree in biblical studies in 1990, and his D.Min. in 1995.

In 1987, Jakes was ordained into the Bishopric, and in 1992, he first preached Woman, Thou Art Loosed, a sermon that addressed the pain of women. The next year, Jakes launched a weekly television broadcast on the Trinity Broadcasting Network, catapulting himself into the world of televangelism. In 1994, he began his weekly broadcasts on Black Entertainment Television, and that same year, he initiated the first ManPower conference, designed to motivate men in their relational and community roles. In 1996, after moving his congregation from small town to small town in West Virginia, Jakes moved his family and fifty other church employees to Dallas where they established the Potter’s House. The first church service drew more than 2,000 people, and since then, the membership has grown to more than 30,000. In 1998, Jakes founded the Metroplex Economic Development Corporation (MEDC) and established Clay Academy in the heart of Capella Park, a mixed-use, “new urbanism” community.

One of PBS Religion and Ethics Newsweekly’s “Top 10 Religious Leaders” in 2000, Jakes holds a place in the Black Americans of Achievement series, The Encyclopedia of African-American Christian Heritage, as well as the Who’s Who Among African Americans. In 2000, Jakes served as the keynote speaker at the annual conferences of the National Council of Black Mayors, the National Black Police Association, and the 2000 Congressional Black Caucus. In 2001, Time magazine and CNN distinguished Jakes as America’s Best Preacher, and the next year, Savoy magazine named him one of the “Top 100 Powers That Be.” In 2009, President Barack Obama asked Jakes to deliver the morning service before the historic Presidential Inauguration. Bishop Jakes, having spent over thirty years in the ministry, is also the author of more than twenty books and a Grammy-award winning gospel musician. Currently, Bishop Jakes lives in Dallas with his wife, Serita. They have five children and two grandchildren.