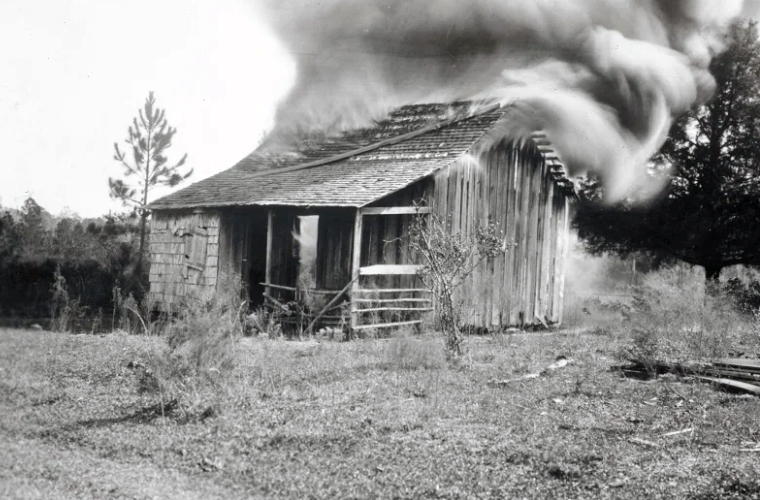 The December 28, 1923, assault and murder of a white woman in the Catcher community in Crawford County quickly ignited a firestorm of racial hatred that, within the span of a few days, exploded into the murder of an innocent black man, charges of night riding being leveled against eleven African Americans, and the exodus of all black families from Catcher, numbering at least forty. Two African-American men were sentenced to death and executed in relation to the murder, while a third was given life in prison, following trials that included dubious evidence offered by the prosecution.

From the days of slavery, the township in which Catcher is situated, four miles southeast of Van Buren (Crawford County) in cotton-producing river bottomland, was inhabited by a larger percentage of African Americans than whites. On December 28, 1923, Effie Latimer (age twenty-five) was, as reported in the newspapers the following day, raped, shot in the back with a shotgun, and clubbed over the head with the same gun. The news was quickly broadcast when a friend discovered the victim in mid-afternoon. A doctor was summoned, and he reported that Latimer regained consciousness long enough to name the shooter as “Son [William or Will] Bettis, but that she did not know the other two colored men.” Before nightfall, newly elected Sheriff Albert D. Maxey arrested Bettis, who denied the charge and calmly went to the Van Buren jail. Interestingly, Latimer’s husband of six years, Robert (age thirty-eight), was reported in the Arkansas Gazette as having not been heard from since he “left home a week ago taking a dozen chickens and half of the provisions in the house.”

Later that evening, due to the sudden gathering of angry white citizens at the jail and reported threats of violence against the prisoner, Bettis was moved across the Arkansas River to the Fort Smith (Sebastian County) jail. The next day, two more African Americans, Charles Spurgeon Rucks (age twenty-six) and John Henry Clay (age fourteen), were also arrested for the murder. After his arrest, Rucks was taken into the woods by Deputy Sheriff W. A. Bushmaier Jr. and “questioned” about the murder. Bushmaier promptly reported to the newspapers, and later testified in the courtroom, that “Rucks had confessed to the crime in his presence.” According to the case files, however, Rucks never confessed. Clay was retained in the Van Buren jail, but Rucks was transported to the Fort Smith jail.

By the evening of Saturday, December 29, an angry white mob of more than 500 white citizens surrounded the jail at Fort Smith, demanding that the prisoners be handed over to them. Many others were running the Catcher roads threatening black residents, smashing tombstones in the black cemetery, and digging up remains of the deceased and burning them. At the Fort Smith jail, the sheriffs secretly removed the prisoners to the railroad station in Mansfield (Sebastian County), where they were whisked away to a Little Rock (Pulaski County) jail to await trial.

For several days afterward, emotionally charged and locally deputized citizen law enforcement officers remained in Catcher, joining in the mob activity in harassing the black citizens in their every movement. On December 30, Special Deputy Sheriff Frederick Creekmore shot and killed the sixty-five-year-old father of Rucks, an action described in the newspaper as an “unfortunate accident.”

That same day, eleven black citizens were arrested and charged with night riding. They were holed up in a log cabin, and local officials contacted the governor to send in the National Guard to “blast” these black men out. Governor Thomas McRae allowed a few men to take a machine gun from an Ozark (Franklin County) company to the Catcher area. Once there, local law enforcement deputized the men. Contrary to legal documentation, the newspapers reported that, upon learning of the machine gun in the area, the African Americans surrendered. According to the case files, only two of them carried shotguns for self-defense, and they had almost no ammunition. Nonetheless, they were charged under Act 112 of 1909, which was directed toward two or more individuals united, confederated, or banded together for the purpose of committing an unlawful act, while wearing any masks, white caps, or robes, or being otherwise disguised.

The legal counsel for the men arrested for night riding filed a motion requesting a change of venue, and they appeared before a jury in Paris (Logan County), though with the same presiding judge. They were sentenced to one year in jail; however, they appealed their conviction, and in October 1924 the Arkansas Supreme Court ruled that “the State has wholly failed to sustain the charge of night riding.”

It was in the motion for change of venue for those charged with night riding that specific information about the exodus of African Americans from Catcher was provided. The motion stated that “anonymous notices were posted in public places and sent to certain individuals among the negro race, advising them to remove from the County of Crawford.” It also stated: “A notice was received through the United States mail by one of these defendants, to-wit, Gus Richardson, informing him, ‘if you get out of Crawford County in five days you will not be bothered; otherwise you have to suffer the consequences.’” Going on, it added that “all of the said defendants who were not confined in jail did remove from said community and from said County, and the families of these defendants who were in jail, did also remove, and the negroes generally from the settlement where these defendants resided.” The front page of the January 18, 1924, issue of the Van Buren Press-Argus blared, “COLONY NEGROES FLEE FROM WRATH OF WHITES.” A few families were told by law enforcement that they could return in a year or so, and a few did. However, the 1930 U.S. Census indicates a greatly reduced black population in the entire township.

Act 258 of 1909, enacted to prevent mob violence or lynching, provided for a speedy trial if mob violence became a threat. Judge James Cochran of Paris presided over a session of the Circuit Court in Van Buren on January 4–5, 1924. Bettis and Rucks were tried separately for murder and sentenced to death by electrocution between the hours of sunrise and sunset on February 15, 1924. The strongest evidence against the two was the very detailed statement of the crime allegedly offered by Clay. According to Clay’s account and trial records, Bettis and Rucks went to Clay’s home on Friday morning to borrow his shotgun for rabbit hunting, and Clay decided to go along. They reportedly stopped by the Latimer home to buy a dozen eggs when the incident occurred. In court, led by the newly elected prosecutor Dave Partain, Clay testified that Bettis and Rucks entered the Latimer home and assaulted her; afterward, Bettis shot her, and Rucks struck her over the head with the gun. The doctor testified that it was the gunshot that caused the lethal wound.

Clay’s name never appeared in school records; he could neither read nor write, and a prison file describes him as mentally very slow. However, his signed statement (which he later retracted when questioned by Scipio Jones) was explicit in every detail. Other evidence from the trial is equally spurious. Special Deputy Sheriff Creekmore’s wife testified that she was a close neighbor though she lived several miles away, and her testimony could only have been based upon hearsay or rumor. One woman produced a dime she alleged was the dime used by Bettis to purchase some eggs, though there was no one present at this alleged transaction save the victim and her assailants. Nonetheless, Bettis and Rucks were both convicted and sentenced to death. Clay was not tried until the regular March 1924 term of court. Because his gun was used, Clay was sentenced to the state penitentiary and “confined at hard labor for the period of his natural life.”

The Van Buren Press-Argus reported on February 15, 1924, that the noted black lawyer Scipio Jones had appealed to the Arkansas Supreme Court the death sentences of Bettis and Rucks. The appeal, based on legal technicalities, was lost, and on July 4, 1924, the same paper noted that Governor McRae refused to grant a stay of execution. Rucks and Bettis were electrocuted “in the death house of the penitentiary at Little Rock” on June 27, 1924. The newspaper further reported that “the condemned brutes spent their last night reading their Bible and praying for mercy” and that “they never at any time admitted their guilt and went to the chair with a firm step and were apparently calm and self-possessed.”

Four years later, on August 16, 1928, Clay was found dead from exposure in a field near one of the prison camps at Cummins. His own death raises questions, as he was a farmhand accustomed to hard work in the fields in the August sun and, at the time, was a trusty given the relatively easy task of tending cattle in the field. His body was not found for two weeks and was badly decomposed.