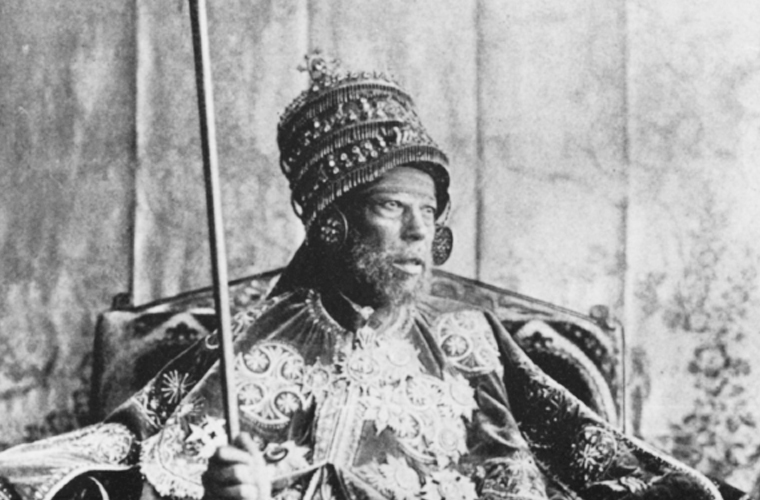 When the advent of colonialism swept across Africa, it was extremely insurmountable for most of the African leaders to resist the military might of the Europeans. Colonization was effected through a powerful mix of trickery, religion and military force.

“This country is mine and no other nation can have it,” Emperor Menelik said in a response to Italy’s claim that it had created a protectorate within his territory. This is the attitude that made him look at colonialism straight in the face and defeat it.

Emperor Menelik II was born as Sahle Maryam on 17 August 1844 and died on 12 December 1913. Born into royalty, he was the son of King Haile Menekot, who was the governor of the province of Shewa. Haile Menekot had laid it clearly that he was going to be succeeded by his son Sahle Maryam, but when he died in 1855, Tewodros II launched an attack on Shewa and conquered it. Menelik was taken as a prisoner by Tewodros II and transferred him to the mountain stronghold of Magdala. Tewodros raised him as a son, treating like a prince and even offered him his daughter for a hand in marriage (he accepted the offer).

In 1865, Menelik escaped so that he could claim back Shewa. The non-royal Ato Bezebeh had been appointed governor of Shewa. Upon Menelik’s return to take back Shewa, Ato ran away. Menelik immediately discharged his charm offensive to win the affection of the people and also in building strategic alliances. He created friendships with Muslims, organized three-day feasts for the locals, created alliances with the French and Italians for political leverage and firearms. He was renowned for his infectious friendliness.  More importantly, he was known as a loyal, brave, intelligent soldier who “loved weapons.”

When Tewodros II died in 1868, Menelik developed aspirations for power, with the aim of being the Emperor. But he had to be patient. He had to wait. He had to submit to Tekle Giorgis (1868–1872) and Yohannes IV (1872–1889). During the time he had to wait to take power, he incorporated several kingdoms and states of southern Ethiopia into his reign. He now had the support he desired.

When Yohannes IV died in 1889, he swiftly proclaimed himself as the Emperor. Upon his coronation on 3 November 1889, he assumed the title Menelik II. The son of the emperor, Mengesha, had lost the succession battle.

At that time, the Italians were trying to cement their colonial moves. Their colonial activity had thrived after they had established themselves firmly along the Red Sea coast. They had set up a colony at Eritrea. They made him sign the infamous treaty of Wichale in May 1889. The Italians had hoped to use this treaty against Menelik. The treaty was signed in two versions – one in Italian, one in Amharic. It is this treaty that agreed to define the boundary between Ethiopia and Eritrea. The problem was that the Italian version of the treaty gave Italy more powers than the two had agreed on. It was all a trick.

When he realized that the treaty was all but just a ruse, Menelik rejected the treaty. Despite spirited efforts from the Italians to bribe him with 2 million rounds of ammunition, Menelik stood his ground. The Italians even tried to use Ras Mengesha to rise up against Menelik to stir up a civil war, but this was all in vain. Ras Mengesha refused to be a puppet for the Italians. There was only one option left for the Italians – going to war against Ethiopia.

The independence of Ethiopia was at stake here. Before Italy launched its invasion on Ethiopia, Eritreans rebelled in a bid to push Italy out and prevent them from attacking Ethiopia. However, the rebellion was not successful. Some Eritreans managed to make their way into the Ethiopian camp at Adwa so that they could jointly fight the Italians.

The Ethiopian and Italian forces clashed at Adwa on March 1, 1896. This was the decisive battle that spelled the fate of Ethiopia’s independence. Italy’s forces were disoriented by the geography, as Ethiopia is a mountainous region. Menelik’s forces infiltrated the opponent’s forces, also employing brutal guerrilla warfare tactics.

196,000 soldiers of the empire under the leadership of Menelik killed 289 Italian officers, 2,918 European soldiers and 2,000 African soldiers that were fighting on Italy’s side. Menelik’s men were armed with 100,000 rifles and heavy weapons. 954 Europeans were reported missing. The Italians had just been defeated. Menelik had preserved the independence of Ethiopia.

Menelik made sure the Wichale Treaty would now work to his favor now that the Italians had been defeated. The world recognized him as the leader of Ethiopia, even sending diplomats to his court. He went on a program to expand Ethiopia’s territory, taking lands under the British protectorate.

Menelik’s reign up to 1913 was marked by modernization. He installed telephone lines and telegraph systems, built the railway that connects Ethiopia and Djobouti, brought back a national currency, constructed buildings for improved educational facilities and ministries, and also developed electricity infrastructure for the country.

Menelik died in 1913 at the age of 69, but his reign was more than iconic and revolutionary. He secured Ethiopia’s independence at the Battle of Adwa and also ensured that the country caught up with the technological advancements of that time. His emphasis was always on Ethiopian unity – that when Ethiopians were united for any cause, they would win!