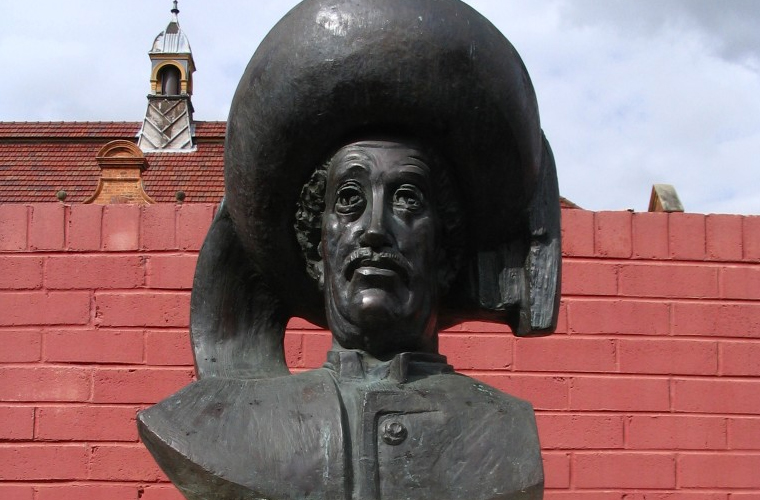 Henry the Navigator, Portuguese Henrique o Navegador, byname of Henrique, infante (prince) de Portugal, duque (duke) de Viseu, senhor (lord) da Covilhã, (born March 4, 1394, Porto, Portugal—died November 13, 1460, Vila do Infante, near Sagres), Portuguese prince noted for his patronage of voyages of discovery among the Madeira Islands and along the western coast of Africa. The epithet Navigator, applied to him by the English (though seldom by Portuguese writers), is a misnomer, as he himself never embarked on any exploratory voyages.

Henry was the third son of King John I and Philippa of Lancaster, the daughter of John of Gaunt of England. Henry and his older brothers, the princes Duarte (Edward) and Pedro, were educated under the supervision of their parents. Henry emerged with pronounced tastes for chivalric romance and astrological literature, as well as with ambitions to take part in military campaigns and, if possible, win a kingdom for himself. The starting point of Henry’s career was the capture of the Moroccan city of Ceuta in 1415. According to Henry’s enthusiastic biographer, Gomes Eanes de Zurara, the three princes persuaded their still-vigorous father to undertake a campaign that would enable them to win their knightly spurs in genuine combat instead of in the mock warfare of a tournament. King John consented and, with Ceuta in mind, began military preparations, meanwhile spreading rumors of another destination, in order to lull the Moroccan city into a feeling of false security

On his return to Portugal, Henry was made the Duke of Viseu and lord of Covilhã. In 1420, at the age of 26, he was made administrator general of the Order of Christ, which had replaced the Crusading order of the Templars in Portugal. While this did not oblige him to take religious vows, it was reported that he afterward resolved to lead a chaste and ascetic life. However, the traditional view of Henry as indifferent to all but religion and the furtherance of his mission of discovery is not supported by later scholarship. Indeed, Henry had not always refrained from worldly pleasures; as a young man, he had fathered an illegitimate daughter. Moreover, his brother Duarte, especially after becoming king, did not hesitate to lecture and reprove Henry for such shortcomings as extravagance, unmethodical habits, failure to keep promises and lack of scruples in the raising of money.

Funds appropriated from the Order of Christ largely financed the Atlantic voyages along the western coast of Africa that Henry began to promote in the mid-1420s. He sought opportunities to take part in the commerce of traditional West African products, especially slaves and gold, and to establish potentially profitable colonies on underexploited islands, the most successful of which he helped to found on Madeira.

Henry’s interest in geography unquestionably was influenced by the travels of Prince Pedro, his older and perhaps more brilliant brother. In 1425 Pedro set out on a long tour of Europe on which he visited England, Flanders, Germany, Hungary, and the principalities of Moldavia and Walachia (now Romania) before returning home through Italy, Aragon, and Castile. In eastern Europe, he was close enough to Ottoman Turkey to appreciate the Muslim danger. From Italy Pedro brought home to Portugal, in 1428, a copy of Marco Polo’s travels that he had translated for Prince Henry’s benefit.

Henry’s other older brother, Duarte, succeeded King John in 1433. During the five years of Duarte’s reign, lack of success in the Canary Islands induced Henry’s captains to venture farther down the Atlantic coast in search of other opportunities. Tradition has claimed that the most important achievement was the rounding of Cape Bojador in 1434 by Gil Eanes, who overcame a superstition that had previously deterred seamen. It seems, however, that this is at best an exaggeration, resulting from the vagueness of the sailing directions reported in Portuguese sources. What Eanes mistakenly called Cape Bojador was actually Cape Juby, which had already been passed by many earlier navigators. During the next years, Henry’s captains pushed southward somewhat beyond the Río de Oro. They also began the colonization of the recently discovered Azores, through the orders of both Henry and Pedro.

In 1437 Henry and his younger brother, Fernando, gained Duarte’s reluctant consent for an expedition against Tangier. Ceuta had proved an economic liability, and they believed that possession of the neighboring city would both ensure Ceuta’s safety and provide a source of revenue. Pedro opposed the undertaking. Henry and Fernando nevertheless attacked Tangier and met with disaster; Henry had shown poor generalship and mismanaged the enterprise. The Portuguese army would have been unable to reembark had not Fernando been left as a hostage in exchange for Henry’s broken promise to surrender Ceuta. Fernando’s death at Fez in 1443 seems to have been felt by Henry as a grave charge upon his conscience.

King Duarte died in 1438, shortly before Henry’s return. His heir, Afonso V, was only six at the time, and Pedro assumed the regency over the bitter opposition of the boy’s mother, Leonor of Aragon, who would willingly have accepted Henry as regent. Nevertheless, for most of the next decade, Pedro and Henry worked in harmony.

In 1441 a caravel returned from the West African coast with some gold dust and slaves, thus silencing the growing criticism that Henry was wasting money on a profitless enterprise. One of Henry’s voyagers, Dinís Dias, in 1445 reached the mouth of the Sénégal (then taken for a branch of the Nile), and a year later Nuño Tristão, another of Henry’s captains, sighted the Gambia River. By 1448 the trade in slaves to Portugal had become sufficiently extensive for Henry to order the building of a fort and warehouse on Arguin Island.

Afonso V attained his legal majority at the age of 14 in 1446. His embittered mother had meanwhile died in Castile, and, although the young king presently married Pedro’s daughter, Isabel, Pedro turned full power over to the youth with obvious reluctance.

Armed conflict between the two became inevitable, and Henry, in the end, felt obliged to side with the king, though he remained as much as possible in the background. He took no part in a skirmish at Alfarrobeira in May 1449, in which Pedro was killed by a chance shot from a crossbowman. Henry’s biographer, Zurara, on the other hand, declared that his hero had done everything possible to prevent Pedro’s death and promised to explain the circumstances further in later writings, but, if he did so, the account is lost.

After Alfarrobeira, Henry spent most of his time at Sagres, his castle in the far south of Portugal. He was accorded by the king the sole right to send ships to visit and trade with the Guinea coast of Africa. He appeared occasionally at the Lisbon court and in 1450 helped arrange for the marriage of the king’s sister to the emperor Frederick III. During most of his last decade, Henry concentrated on the sponsorship of voyages. These accomplished only minor discoveries, as the prince now seemed mainly interested in exploiting resources—especially African slaves and from 1452 the sugar of Madeira—in the regions already contacted. The last two important mariners sent out by Henry were the Venetian explorer Alvise Ca’ da Mosto and the Portuguese Diogo Gomes, who between them discovered several of the Cape Verde Islands.
Afonso V had a small interest in discovery but great zeal for Crusading and knight-errantry. Resuming the old attempt at Moroccan conquest, he led an expedition in 1458 against Alcácer Ceguer (now Ksar es-Shrhir), in which Henry accompanied him. The prince, now 64, did well in the fighting, and, when the town capitulated, Afonso left the surrender terms to his uncle, who showed remarkable leniency. Henry lived for two years after his return from Alcácer Ceguer.
The farthest point south that was reached during Henry’s lifetime was probably present-day Sierra Leone; after his death, the pace of progress in Portuguese exploration accelerated markedly, suggesting that the prince’s reputation as a patron of explorers has been exaggerated. Although the colonization of Madeira proved, at least for a while, to be a brilliant success, most of his enterprises failed. The Canary Islands, the focus of his most unremitting obsessions, eventually fell to Spain, and Portugal did not succeed in garnering much of the African gold trade until more than 20 years after the prince’s death. His desire to convert the peoples of the Canary Islands and West Africa to Christianity was often voiced but was largely unsupported by action. Nor is Henry’s traditional reputation as a champion of the advancement of science-supported by any genuine evidence. He did, however, commission chronicles by Zurara that presented a heroic image of himself—an image that persisted into the 21st century. His long-term importance thus has been as a legendary figure of the early stages of European exploration and discovery, as well as an exemplar of Portuguese nationalism.
previous post