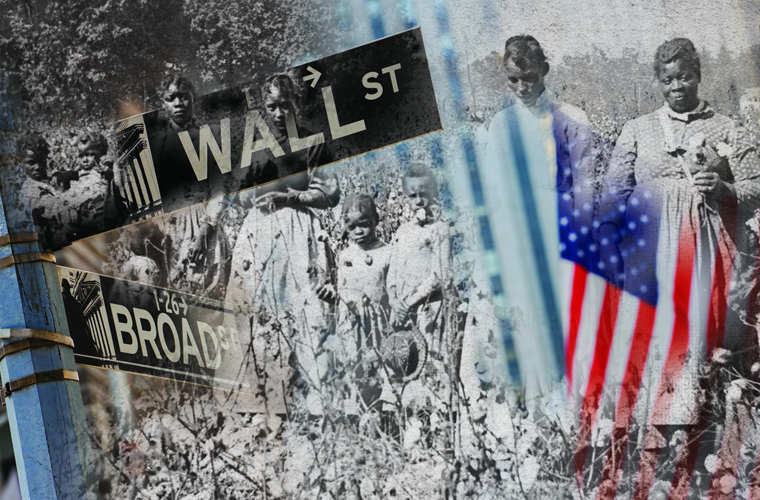 While “Main Street” might be anywhere and everywhere, as the historian Joshua Freeman points out, “Wall Street” has only ever been one specific place on the map. New York has been a principal center of American commerce dating back to the colonial period — a centrality founded on the labor extracted from thousands of indigenous American and African slaves.

Desperate for hands to build towns, work wharves, tend farms and keep households, colonists across the American Northeast — Puritans in Massachusetts Bay, Dutch settlers in New Netherland and Quakers in Pennsylvania — availed themselves of slave labor. Native Americans captured in colonial wars in New England were forced to work, and African people were imported in greater and greater numbers. New York City soon surpassed other slaving towns of the Northeast in scale as well as impact.

Founded by the Dutch as New Amsterdam in 1625, what would become the City of New York first imported 11 African men in 1626. The Dutch West India Company owned these men and their families, directing their labors to common enterprises like land clearing and road construction. After the English Duke of York acquired authority over the colony and changed its name, slavery grew harsher and more comprehensive. As the historian Leslie Harris has written, 40 percent of New York households held enslaved people in the early 1700s.

New Amsterdam’s and New York’s enslaved put in place much of the local infrastructure, including Broad Way and the Bowery roads, Governors Island, and the first municipal buildings and churches. The unfree population in New York was not small, and their experience of exploitation was not brief. In 1991, construction workers uncovered an extensive 18th-century African burial ground in Lower Manhattan, the final resting place of approximately 20,000 people.

And New York City’s investment in slavery expanded in the 19th century. In 1799 the state of New York passed the first of a series of laws that would gradually abolish slavery over the coming decades, but the investors and financiers of the state’s primary metropolis doubled down on the business of slavery. New Yorkers invested heavily in the growth of Southern plantations, catching the wave of the first cotton boom. Southern planters who wanted to buy more land and black people borrowed funds from New York bankers and protected the value of bought bodies with policies from New York insurance companies. New York factories produced the agricultural tools forced into Southern slaves’ hands and the rough fabric called “Negro Cloth” worn on their backs. Ships originating in New York docked in the port of New Orleans to service the trade in domestic and (by then, illegal) international slaves. As the historian David Quigley has demonstrated, New York City’s phenomenal economic consolidation came as a result of its dominance in the Southern cotton trade, facilitated by the construction of the Erie Canal. It was in this moment — the early decades of the 1800s — that New York City gained its status as a financial behemoth through shipping raw cotton to Europe and bankrolling the booming industry that slavery made.

In 1711, New York City officials decreed that “all-Negro and Indian slaves that are let out to hire … be hired at the Market house at the Wall Street Slip.” It is uncanny, but perhaps predictable, that the original wall for which Wall Street is named was built by the enslaved at a site that served as the city’s first organized slave auction. The capital profits and financial wagers of Manhattan, the United States and the world still flow through this place where black and red people were traded and where the wealth of a region was built on slavery.