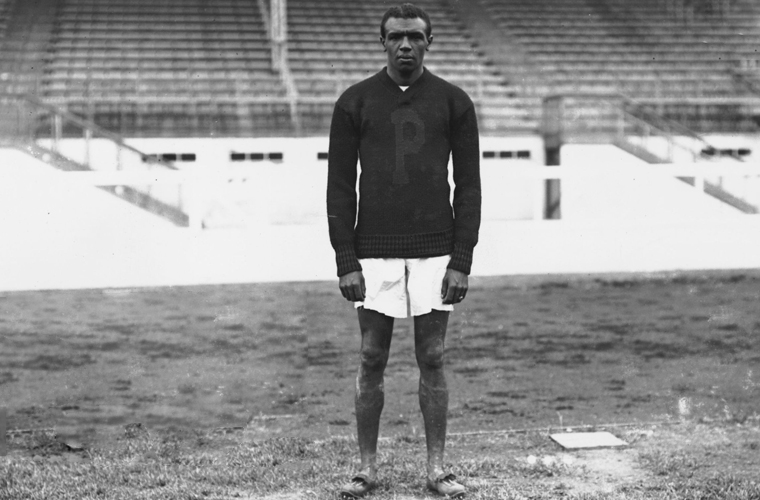 The first African American to win an Olympic Gold Medal, John Baxter Taylor Jr. was born November 3, 1882, in Washington, D.C. He attended Central High School in Philadelphia, where he ran track and was the only African American on the team. After graduating from high school in 1902, Taylor attended Brown Preparatory School for one year, running track for an undefeated team.

In the fall of 1903, Taylor enrolled in the Wharton School of Finance at the University of Pennsylvania. In spring 1904, he joined the varsity track team. In May 1904, at the Intercollegiate Association of Amateur Athletes of America (IC4A) championship, Taylor won the 440-yard run, breaking the intercollegiate record with a time of 49 1/5 seconds. In 1905, Taylor withdrew from school, returning in the fall in the School of Veterinary Medicine. Taylor returned to track in 1906 under trainer Michael Murphy. In 1907, at the IC4A championship, Taylor won the 440-yard race with a record of 48 4/5 seconds. In September, he won the 440-yard race at the Amateur Athletic Union (AAU) championship. The following spring, despite a hernia, Taylor won his third quarter-mile championship and anchored the one-mile relay. In June 1908, Taylor graduated from the University of Pennsylvania with a degree from the School of Veterinary Medicine.

In July 1908, athletes gathered in London for the Fourth Olympiad. John Taylor was the first African American to represent the United States in an international sports competition. The 5’11,’’ 160-pound Taylor ran with an eight-and-a-half foot stride. Taylor competed in a controversial 400-meter relay final. British officials called the race before the four competitors crossed the finish line asserting that one of the three Americans fouled the British runner. The Americans refused to run the race again and the British runner took gold.

Later that day, Taylor competed in the 1600-meter medley relay. The 1908 Olympiad was the first time athletes competed in this race that required different runners in the relay to run different lengths. Taylor ran the third, or 400-meter, leg. The American team won the race and Taylor became the first African American to win a gold medal at the Olympic Games.

On December 2, 1908, John Taylor, twenty-six, died at home of typhoid pneumonia and was buried in Eden Cemetery in Philadelphia. He earned forty-five cups and seventy medals during his brief track career.