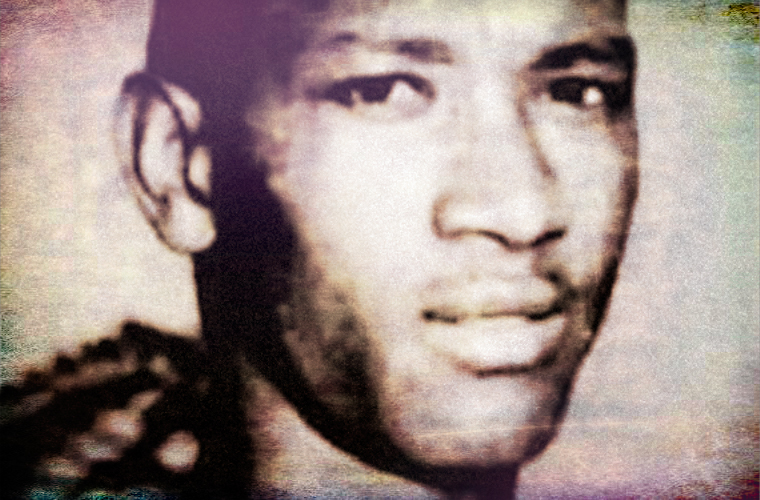 The average white man or woman in the face of denunciation by Blacks about the aggression meted out to them are quick to point out that perhaps the melanated victim did something to provoke the authority often the police.

And so the talk is perhaps if Blacks were to dress better or be meek, the aggression of white bullies some with police uniforms would lessen but the evidence does not support such claims.

A cursory picture of hanged Blacks in the U.S and other accounts shows most of them in suits or overcoats and often they met their deaths while minding their business till a white person decided to have some fun with their deaths. Even babies were not spared whimsical deaths.

In the case involving the lynching of John Hartfield on June 26, 1919, at the hands of a white mob, he was hanged, shot at multiple times, and then burned with his body dismembered and shared by the spectators who took his parts home as a trophy.

Seeking a better life, Hartfield left his home in Ellisville and resided in East St. Louis. He had managed to sustain a relationship with his lady-love Ruth Meeks who happened to be white discreetly, however, upon his return to Ellisville 1919, the relationship became known to some white men.

It didn’t matter that these men were not involved with Ms. Meeks but for being a Black man and being intimate with a white woman of a race they claimed was superior, a death sentence was passed on Hartfield.

Needing something to pin so they can visit violence on him, the assailants claimed he raped Meeks, adding she was 18 while the lady was actually in her mid-twenties.

Hartfield, to preserve his now precarious life managed to elude the vile men baying for his life for several weeks but undeterred, Sheriff Allen Boutwell in Laurel raised donations to fund a hunting party with Bloodhounds at the request of Sheriff Harbison.

Now a man on the run, Hartfield was finally apprehended attempting to board a train on June 24 and was turned over to Sheriff Harbison, who placed him in the charge of a deputy and left town. The deputy immediately released him to a mob.

The Jackson Daily News, the New Orleans States, and other newspapers ran headlines that “John Hartfield will be lynched by Ellisville mob at 5:00 this afternoon” and additional text that “The officers have agreed to turn him over to the people of the city at 4 o’clock this afternoon when it is expected he will be burned”. 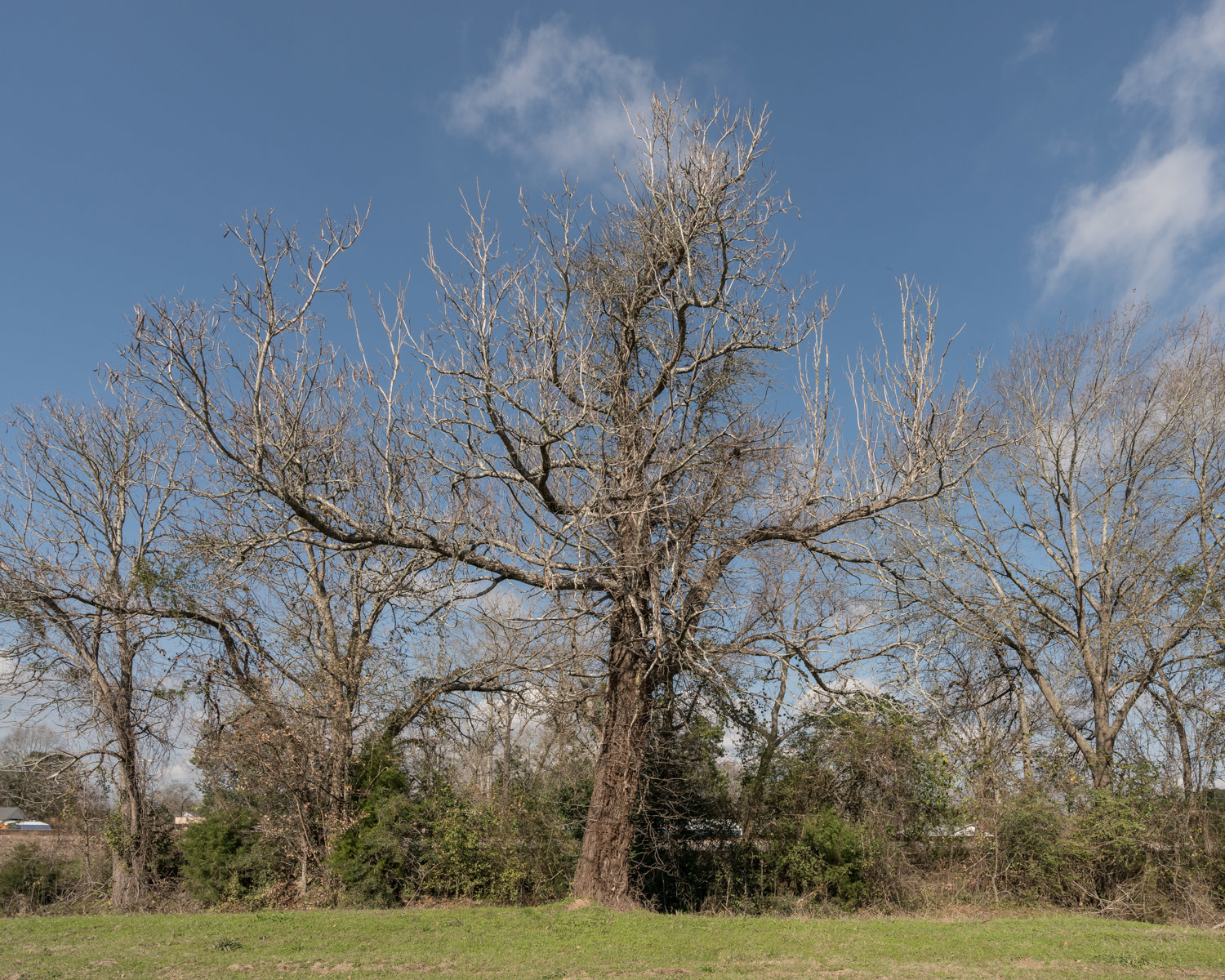 For newspapers which are to safeguard the best interest of society to unashamedly publish the notice of the capture of an innocent man and a note that he will be burned erases the doubt that the lynching was institutional and it was a clear indication that it had become the norm such that whites who might have found it abhorrent and didn’t appear to be enthusiastic about it risked having harm visited on them.

Another curiosity with Hartfield’s lynching was that with his capture, he had been wounded at the shoulder but guess what, a white doctor, A. J. Carter was procured for him to treat his wounds just to keep him alive long enough to be murdered. 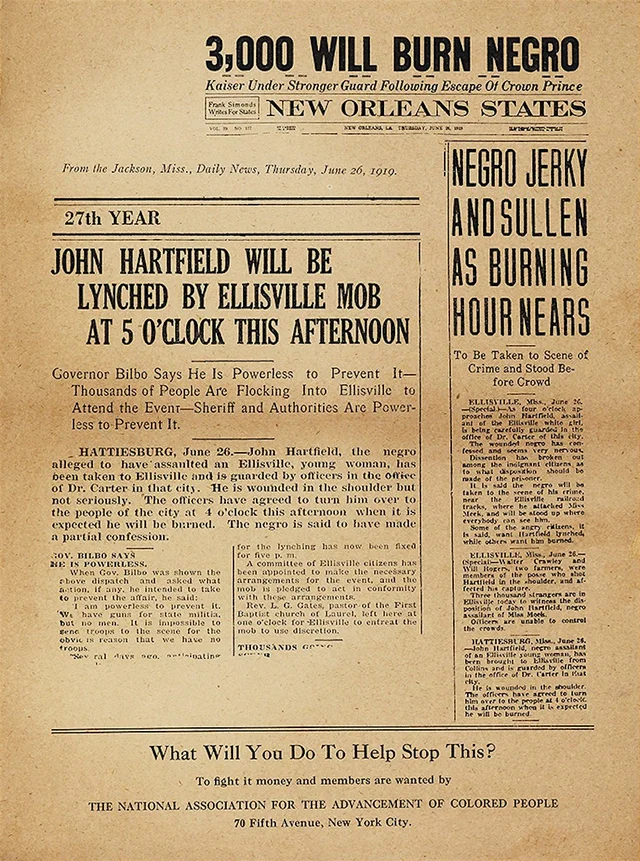 And so at 5:00 PM on June 26, 1919, a large cheering crowd assembled to watch the premeditated murder of Hartfield. Theodore Bilbo, the governor of Mississippi, took no action. With the murder announced a day in advance in major newspapers, a crowd of as many as 10,000 watched while Hartfield was hanged, shot, and burned with pieces of his corpse chopped off and sold as souvenirs.

Hartfield was hanged from a gum tree alongside nearby railroad tracks, riddled with bullets, and then burned. White men, women, and children had traveled from throughout the state to watch his gruesome murder. Commemorative postcards of the lynching were created and sold afterward.

Governor Bilbo declared: “This is a white man’s country, with a white man’s civilization and any dream on the part of the Negro race to share social and political equality will be shattered in the end.”

Those who experienced Hartfield’s lynching describe it as an act of terrorism aimed at intimidating the entire black community compelling many to flee in fear for their own lives.

Since Hartfield was formerly a slave, he never received a birth certificate so his age when he died is unknown.

Hundred years on after Hartfield was desecrated for no criminal conduct nor for toppling a government but for daring to love without color bias, we remember an ancestor, and may he rest in power.