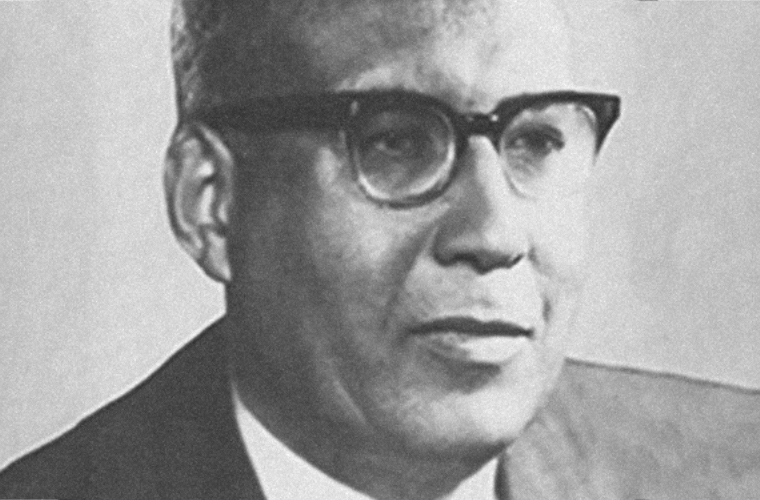 Melvin Herbert (Mel) Evans was born in Christiansted, St. Croix, on August 7, 1917, soon after the United States purchased the Virgin Islands from Denmark. After graduating from high school on St. Thomas, Evans received a bachelor of science degree in 1940 from Howard University and an M.D. from the Howard University College of Medicine in 1944. In 1945, Evans married Mary Phyllis Anderson, a nurse he met in a New York hospital; the couple had four sons: William, Melvin, Jr., Robert, and Cornelius. During the next 15 years, he served in a variety of medical and public health posts at hospitals and institutions in the United States and the Virgin Islands. From 1959 to 1967 Evans served as the Commissioner of Health for the Virgin Islands; he also was the chairman of the Governor’s Commission on Human Resources from 1962 to 1966. In 1967 he furthered his academic credentials by earning a master’s degree in public health from the University of California at Berkeley. He returned to private practice for two years before President Richard M. Nixon appointed him governor of the Virgin Islands. In August 1968 Congress passed the Virgin Islands Elective Governor Act, providing for the election of a governor by the territory’s residents. Evans was elected as a Republican to the governor’s office in 1970 and served until 1975. After his unsuccessful bid for re-election in 1974, he was Republican National Committeeman from the Virgin Islands and chairman of the board of trustees of the College of the Virgin Islands.

In 1972, Congress authorized nonvoting Delegates for the Virgin Islands and Guam in the House of Representatives. When the first Delegate of the Virgin Islands, Democrat Ron de Lugo, announced his decision to leave the House at the end of the 95th Congress (1977–1979) to run for governor of the American territory, Evans entered the 1978 general election to fill his open seat. In a tight race, Evans narrowly defeated Democrat Janet Watlington, a congressional aide to de Lugo, with 52 percent of the vote, to become the Virgin Islands’s first black Delegate. Sworn into the 96th Congress (1979–1981) on January 3, 1979, Evans served on the Armed Services, Interior and Insular Affairs, and Merchant Marine and Fisheries committees.

During his congressional career, Evans paid close attention to the needs of his unique constituency, focusing on a legislative agenda to improve education and health care in the Virgin Islands. He secured federal funds to provide the territory’s public education system with additional programs and services for its expanding school-age population. A longtime professional in the medical field, Evans introduced legislation to alleviate the critical shortage of doctors at local health facilities by permitting foreign physicians to practice in the Virgin Islands. “I firmly believe that the 120,000 people of the U.S. Virgin Islands, in addition to the 1.5 million tourists who annually visit our islands, must be provided adequate medical assistance to which they are entitled,” he told his colleagues on the House Floor. He also urged the Hous to authorize funding to build two hospitals to accommodate the growing population of the territory.

Determined to improve the quality of life on the Virgin Islands, Evans used his position in Congress to bring awareness to a variety of local issues and concerns. He attempted to make farm credit loans available to local fishing and agricultural industries and succeeded in having the Virgin Islands classified as a ‘state,’ making the territory eligible to receive full law enforcement funding. Following the devastation wrought by Hurricane David and Tropical Storm Frederic in 1979, Evans urged Congress to approve flood control measures for the islands. In 1980 he organized congressional hearings in St. Croix and St. Thomas to investigate chronic delays in mail delivery between the United States and the Virgin Islands. Evans also successfully sponsored a bill allowing federal recognition for National Guard officers from the Virgin Islands.

As one of only 17 blacks serving in the 96th Congress, Evans advocated increased rights for blacks. Shortly after joining the House, he remarked, “No one who has not been disenfranchised does not understand what it means to be disenfranchised.” He added, “I’m from an area, you know, that got its first delegate to Congress only six years ago.”  Despite his Republican affiliation, the entirely Democratic Congressional Black Caucus (CBC) welcomed Evans, contending that partisanship should not play a role in advancing the rights of minorities. The Virgin Islands Delegate and the first–ever Republican caucus member expressed great satisfaction at joining the CBC but warned, “Not only do I speak with a Republican point of view but I represent it in the caucus.”  During his one term, Evans supported efforts to designate a national holiday for Martin Luther King, Jr., and after the death of A. Philip Randolph in May 1979, he eulogized the civil rights leader on the House Floor. He strongly opposed a proposed constitutional amendment to eliminate court-ordered busing in public schools: “When people protest how strongly they favor civil rights and how vehemently they oppose segregation and then seek to remove one of the only, if not the only remedies, however imperfect without offering a viable alternative, it causes serious concern.” Evans’s dedication to civil rights also extended to international politics. He joined many of his House colleagues in expressing outrage against the South African government’s practice of racial segregation.

Evans lost his 1980 re-election bid against Ron de Lugo, who had returned to seek his old seat after failing to win his bid for governor of the territory. Evans garnered 47 percent of the vote in a close contest.  Many Members of the House paid tribute to the retiring Evans, commending his commitment to the Virgin Islands, even though he served in the House for only two years. In 1981, President Ronald W. Reagan nominated Evans as United States Ambassador to Trinidad and Tobago. Evans served in that office until his death of a heart attack in Christiansted on November 27, 1984.