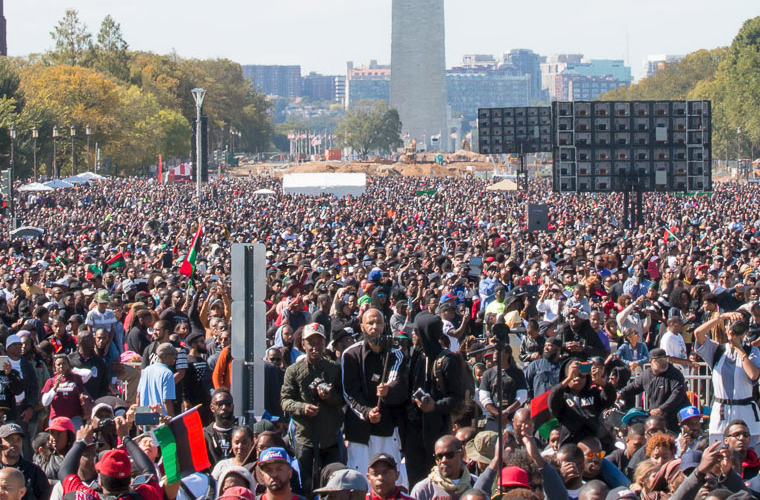 Million Man March, a political demonstration in Washington, D.C., on Oct. 16, 1995, to promote African American unity and family values. Estimates of the number of marchers, most of whom were African American men, ranged from 400,000 to nearly 1.1 million, ranking it among the largest gatherings of its kind in American history.

The event was organized by Louis Farrakhan, the often controversial leader of the Nation of Islam, and directed by Benjamin F. Chavis, Jr., the former executive director of the National Association for the Advancement of Colored People, to bring about a spiritual renewal that would instill a sense of personal responsibility in African American men for improving the condition of African Americans. Among other prominent African Americans who supported and spoke at the event were Jesse Jackson, Rosa Parks, Cornel West, and Maya Angelou, along with Marion Barry and Kurt Schmoke, then the mayors of Washington, D.C., and Baltimore, Md., respectively. “Let our choices be for life, for protecting our women, our children, keeping our brothers free of drugs, free of crime,” Schmoke told the crowd, which assembled on the Mall. It was reported that in response to the march some 1.7 million African American men registered to vote.

A number of African American leaders did not support the march, including Mary Frances Berry, chairman of the U.S. Commission on Civil Rights, and Rep. John Lewis, the latter of whom saw Farrakhan’s message as an effort to “resegregate America.”