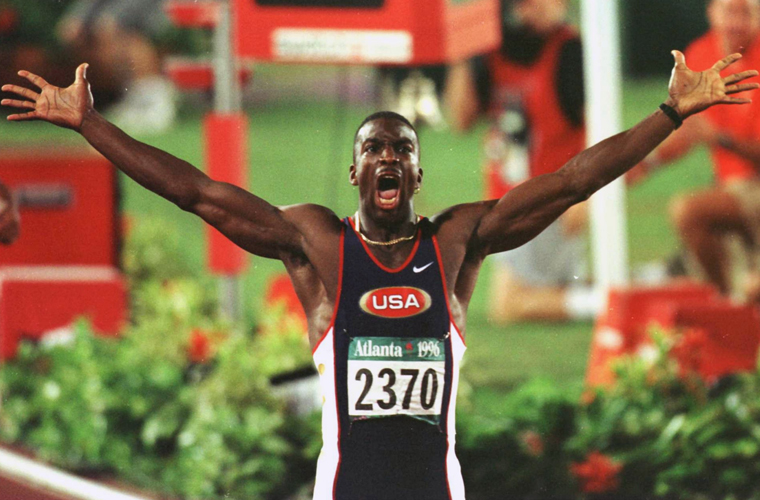 Michael Johnson, in full Michael Duane Johnson, (born September 13, 1967, Dallas, Texas, U.S.), American sprinter, perhaps the most eminent figure in athletics (track and field) in the 1990s. For much of the decade, he was virtually unbeaten in the long sprints—the 200-meter and 400-meter races—and he held world records in the indoor 400 meters and the outdoor 200 meters. At the 1996 Olympic Games in Atlanta, Georgia, he became the first man to win gold medals at both distances; he also set Olympic marks in both events.

In high school, Johnson was one of the top 200-meter runners in Texas. After entering Baylor University in Waco, Texas, in 1986, he first began competing at 400 meters. In 1989, during his junior year, he set the indoor 200-meter U.S. record to win the national collegiate title—a title that he defended his senior year, both indoors and outdoors.

Johnson’s statuesque running style—upright back, low knee-lift, and composed face—was very unlike other trackmen. In 1991 he lowered the world indoor mark at 200 meters, winning that event outdoors at the world championships. He won his first Olympic medal at the 1992 Games in Barcelona, Spain, as a member of the 4 × 400-meter relay team that set the world record, which he helped to lower again the following year. In 1995 he twice broke the world mark in the indoor 400 meters and won both long sprints at the world championships. For his double victory at the 1996 Olympic Games, at which he shattered the 200-meter world record by 0.34 second while posting a time of 19.32 seconds, he was named Athlete of the Year by Track & Field News, which had awarded him American Athlete of the Year five times (1990, 1993–96).

At the 2000 Sydney (Australia) Games, Johnson became the first male Olympian to defend his title in the 400 meters; he did not run in the 200-meter race, having failed to qualify at the U.S. trials because of an injury. He also earned a gold medal as the anchor of the 4 × 400-meter relay team. At the Games’ conclusion, Johnson announced that he was retiring from Olympic and world championship competition. In 2008 Johnson returned his 2000 Olympic relay gold medal to the International Olympic Committee after one of his teammates admitted to taking performance-enhancing drugs at the time of the race. While Johnson was under no obligation to return his medal, with this admission his teammate became the third member of the 4 × 400-meter relay team to have either admitted to or tested positive for performance-enhancing drugs since 2000, and the strongly anti-doping Johnson felt that the medal was now “tainted.”