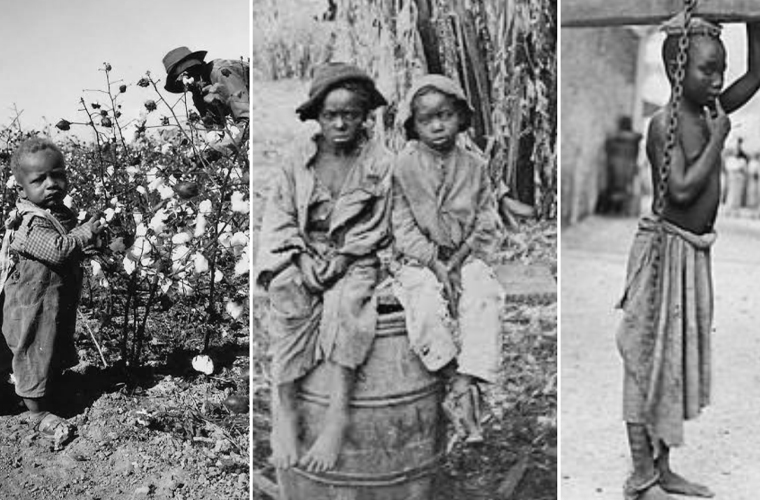 Till today, many Africans do not fully know the extent to which African children and babies were brutalized by European and American slave dealers. The slavers were intentional about their brutality to the Black children, and it was to instill fear in the young ones, thereby making them grow into obedient slaves. This meant fewer run-away slaves for the slave masters and dealers.

It defies human imagination, the kind of cruelty that a human being could dish out to a baby. It pointed to the fact that slavery was not just an economic venture for the Caucasians, but also a means of slow genocide and expression of draconian hate for a people.

The lives of those little children were expendable to the slavers since many more could be gotten. These children were either given birth is breeding farms or were kidnapped with their mothers by slave dealers.

These babies experienced first hand the barbarity and viciousness of the Caucasian man. They were beaten to a pulp, which often led to permanent disability or death. Many were snatched from the arms of their mothers and sold. Now imagine being that child and experiencing the powerlessness, fear, and tears of your mother as you were being handed to a stranger.

Many of these children were kept in cages in breeding farms just like animals. They were exposed to the nasty and sick pedophilia practice of Caucasians, as slave owners and their friends violated these little black girls and boys.

The experiences of these children were often times physical, but that which had the most lasting and traumatizing effects was psychological torture. And these psychological traumas have been handed down through generations. The worst part is that the descendants of the Black slaves are forced to deal with the genetic memory and the present and continuous attack on their skin and community.

Sometimes when we talk about the harrowing experiences of Black people, some people in this generation push it aside as a non-issue. They say ‘It happened in the past, so we should all forget and move on. The world is a global village now and the races have started to mix”. But these people know nothing about life. They don’t understand that history repeats itself and that the knowledge of the hurt of yesterday will help us deal with the issues of today.

There are many pieces of evidence to the brutality faced by Black slave children, and we would love to point you to some of them that were documented. Below are some instances were humanity wore the face of demons and fed on little children:

1834 Nassau – A SLAVE MASTER SOLD 20 CHILDREN GIVEN BIRTH TO BY ONE WOMAN:

In a Book titled ‘Early Settlers Of The Bahamas’, written by A. Talbot Bethell in 1937, a conversation with a newly freed slave was documented. It read:

“Massa,” said an old woman to Governor Colebrooke, ” I have had 20 children. My Massa and Missus sole ’em all off. One of my gals was sole to buy young Missus a piano, and whenever I heard her play on it, I used to stop my ears; I thought I heard my child crying out that it was bought with her blood.

Dey was all sole off. I have not got one left to bury me but now me see freedom! Ah! and my old heart is glad because I will go happily to my grave.”

Just imagine for a second what this woman went through those 20 times. Then imagine the fate of those children in the hands of pedophiles, rapists, and hateful slavers. Now, if one woman lost 20 children in her lifetime, imagine how many children were faced with these draconian experience from millions of Black mothers for over 400years.

1773 In Queen-Anne’s County, Maryland – TWO BLACK GIRLS OF 10 and 6 YEARS OF AGE WERE DISFIGURED. One had a big scar on her face, and the Other had her nose sunk in:

The following account below is from a document for the two girls who went missing from their owners possessio at some point:

FIFTY DOLLARS REWARD.
“On Sunday last were stolen or seduced from the subscriber, living in Queen- Anne’s County, opposite to Chestertown, in Kent County, in Maryland, two negro slaves, one named Rachel, about nine or ten years of age, of yellow complexion, well grown, has a scar on her throat under her jaw, and two remarkable broad for meteeth; the other named Sarah, about five or six years of age, thick lips, hollow eyes and the upper part of her nose much sunk.

These slaves were formally the property of Elizabeth Adair, of Kent county aforesaid, who intermarried with John Posey, and were purchased of the said John Posey, by Sara Flower, with whom the subscriber intermarried.

As it is suspected that they have been taken away, with a purpose of conveying them out of this province, all persons are cautioned against purchasing them, and whoever will make known to the subscriber, the person or persons who stole or seduced the said slaves from him, and the person in whose possession they are, so that they may be recovered, and the offender offenders punished according to law, shall receive the above over the reward, fromEMMANUEL KENT.”

In 1832 A Black Baby Was Dropped Into Boiling Water By The Captain Of The Ship:

It was accounted and documented that while Black slaves were being transported from Africa, an incident that shocked everyone happened. A 10 months old baby was sulking and did not want to eat. It troubled the captain because that was part of the money they would make. So the captain took the child from the mother and tried to force the child to eat while hitting the child. He was furious and he said: ‘I’ll make you eat or I’ll kill you.’

The way the captain manhandled the child and other the harsh conditions the baby was facing on the ship made the child’s leg to swell. The captain ordered his men to boil some water which would be used to douse the swollen legs of the child. Either he had some compassion for the child or he was just trying to save a commodity for the market.

All of these was done under the watch of other black slaves who murmured and cried out of pain for what the captain did to a poor little baby and the mother. At the time of researching and writing the just concluded paragraph, I paused and shed a tear. No, these were/are not human beings. They cant be.

In 1832, At St. Thomas, A Captain Sent A Boat To Rescue A Drowning Dog And Not The Black Boy Who Drowned With It:

In a publication which was titled “Pity the Negro’, it was accounted that the ship’s crew had just passed the harbor of Saint Thomas and were on their way to the Island of Saint Croix. The captain ordered a little black boy to climb to the top of the ship’s mast and drop down the flag. When the boy climbed the mast and tried to untie it, he slipped and fell into the sea.

One of the crew members who narrated this story said that drowning boy called out for help, but the captain ignored him and abandoned him to drown. But fortunately for the boy, the captain’s Spanish captain dog saw the drowning boy and jumped overboard into the sea to rescue the boy.

After calling on the dog several times and the dog ignored, the captain then sent out a boat to bring in the dog and also the boy. When the crew members brought the boy on board, the captain beat the living day-light out of him for losing his flag.

Now you can imagine such wickedness.

In one of our articles we exposed the hidden secrets of how Black babies were used for alligator bait in America. These and many more were the bitter fate suffered by Black children during slavery.

Conclusion:
The truth is that there are numerous accounts of this barbarous behavior and treatment towards Black children throughout the period of slavery and beyond. What is most painful that those who did this despicable thing would do it again if given the chance.

Today in America, you would find police officers shooting Black babies and discharging pepper spray to the eyes of kids. And also all manner of things that are devilish and inhumane.

These stories and many more like it ought to be told, so that Black people know how they relate with the races that have caused (and continue to cause) us the most pain. We must know and remember, and also talk about these things, for the sake of those who died. We owe it to them to tell their harrowing stories.

Looking back on Wilmington’s all-black hospital