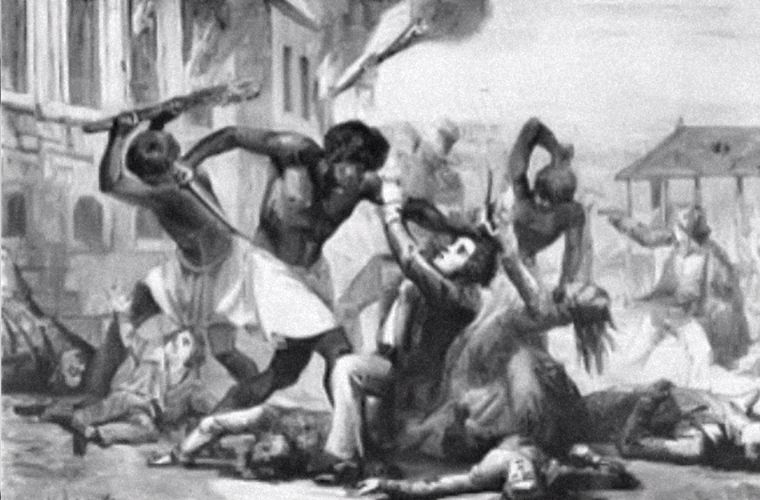 The first major sugar-producing zone in the United States was the site of the largest slave insurrection in US history, one year before Louisiana’s statehood. During a ferocious downpour on a cold, windy late Tuesday evening, January 8, 1811, in the Territory of Orleans, slaves on a sugar plantation owned by Manuel Andry rose in rebellion. Andry owned more than eighty slaves, more than any other slaveholder in St. John the Baptist Parish. The slaves attacked the big house and assaulted Andry. Although severely wounded, he managed to escape his assailants and in desperate search of succor, crossed to the west bank of the Mississippi River. Gilbert Thomassin Andry, Manuel’s youngest son, fell, to the rebels, “ferociously murdered” in the words of his father.

After looting Andry’s estate, the insurgents moved southward rapidly along the east bank levee, following the serpentine contours of the Mississippi River. The east bank alluvium on the German Coast (St. John the Baptist and St. Charles parishes), with sugar plantation clusters along the riverfront like beads on a string, contained the highest density of slaves in the territory. The rebels soon crossed into St. Charles Parish and headed for New Orleans, little more than thirty miles away. The slaves marched noisily, according to eyewitnesses, in military-style formation. They beat drums, waved flags, and carried a variety of weapons, including firearms. Slaves from other plantations joined the rebels, who recruited on the fly, using force and intimidation in some cases to swell their ranks. The number of rebels fluctuated during the course of the insurrection; eyewitness estimates range from 150 to 500. In plundering several other estates, the slaves tarried long enough in St. Charles Parish to dispatch Jean François Trépagnier, who had attempted to defend the family manor house, standing on the veranda with a shotgun.

Panicked whites, warned of the movement, scrambled for safety down the river road into New Orleans. William C. C. Claiborne, the territorial governor, called out the militia, ordered a lockdown of shops and cabarets, and imposed a curfew. General Wade Hampton, commander of regular troops stationed in the area to guard the territorial frontier, had arrived in New Orleans two days before the revolt. He took command of a hastily mustered force of regular troops, militia, and volunteers who headed northward on January 9 to confront the rebels. Hampton’s mobilization represents the first time in US history that federal troops were mobilized to suppress a slave insurrection. Hoping to crush the rebels in a vise, Hampton dispatched orders for Major Homer Virgil Milton in Baton Rouge to descend the river with another body of regulars. Unknown to Milton and Hampton, Manuel Andry, despite his wounds, had managed to rally a sizeable militia force on the west bank of the river.

The revolt climaxed on the morning of the second day, January 10, as these three forces converged for the kill. A unit of Hampton’s forces under the command of Major John Darrington made the first contact shortly after the rebels had crossed into Orleans Parish. The main body of rebels had ensconced themselves at night on a sugar plantation owned by Jacques Fortier, about eighteen miles from the city. Hampton planned to envelop the rebels after dawn with a coordinated, multipronged attack. Once on the offensive, however, Hampton discovered to his astonishment that the reportedly drunk and disorderly rebels had abandoned Fortier’s estate in the dead of night with a disciplined retreat northward. Repositioned on Bernard Bernoudi’s sugar plantation in St. Charles Parish, the rebels were caught off guard by Andry’s militia after it had quietly crossed over from the Mississippi’s west bank. Lines of charging mounted militiamen, including free persons of color, broke the rebels’ ranks; the battle quickly turned into a rout. The wounded Andry, an eyewitness, reported to Governor Claiborne that it was “un grand carnage” (“a great slaughter.”)

Slaveholding judges assembled in St. John the Baptist Parish, St. Charles Parish, and New Orleans to try captured slaves. Sketchy records from two of the courts (St. Charles Parish and New Orleans) survive. The busiest tribunal, comprising five elite slaveholders, convened on the Destrehan Plantation in St. Charles Parish. Outraged whites removed from captivity Charles Deslondes, the alleged ringleader, and proceeded to shoot, burn, and mutilate him. The presence in and around New Orleans of thousands of recently arrived white refugees from the Haitian Revolution intensified emotions and framed perceptions of the insurrection. To deter future slave rebelliousness, whites gathered the heads from multiple black corpses and placed them atop poles at regular intervals along the east-bank levee for more than thirty miles from Andry’s plantation to the gates of New Orleans.

Although historians have largely overlooked the event, no slave insurrection in US history left more black bodies on the battlefield. Close to one hundred slaves died either in combat or by execution soon afterward. Unlike the 1739 Stono rebellion in colonial South Carolina or the 1791 Pointe Coupée conspiracy in Spanish Louisiana, in which a single African ethnic group predominated, the 1811 insurrection combined African and Creole slaves, men and women, field hands and more privileged slaves, and mulattos and blacks. Misinformation about the origin and status of Charles Deslondes abounds. Neither a free person of color nor of Haitian origin, Charles Deslondes was a mulatto slave driver, most likely born in Spanish Louisiana, who had been working for Manuel Andry, although he was owned by Andry’s neighbor, the widow Marguerite Deslondes.

Surviving evidence permits no firm conclusion as to what caused the insurrection or the goals of the rebels. An intensifying, coercive labor regimen associated with sugar culture undoubtedly preconditioned the movement. Interrogatories of captured slaves indicate the predominance of young, skilled male slaves in the insurrection, whose planning was facilitated by the mobility of the slave drivers like Charles Deslondes. Shifting troop movements related to the US annexation of West Florida in December 1810 may have helped kindle the revolt. Wade Hampton accused Spanish agents of stirring up the slaves. No evidence has yet surfaced to support his claim. To be sure, some slaves had particular grievances regarding treatment by their masters. One Congo slave, when asked why he was headed to New Orleans, replied succinctly, “to kill whites.” The rapid movement of a disciplined force of slaves who covered dozens of miles in little more than twenty-four hours suggests not only a conscious assault on New Orleans but also a mass slave breakout from the territory, possibly to Haiti.

In the aftermath of the revolt’s suppression, citizens of the territory affected police and militia reforms and demanded an increased presence of federal troops.