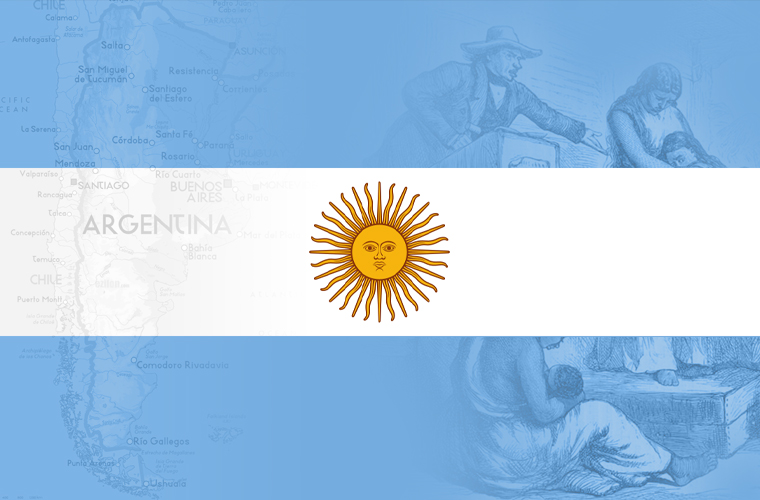 Millions of these helpless Africans washed ashore in Brazil — indeed, in the present-day, roughly one-half of the Brazilian population trace their lineage directly to Africa. African culture has imbued Brazil permanently and profoundly, in terms of music, dance, food, and in many other tangible ways.

But what about Brazil’s neighbor, Argentina? Hundreds of thousands of Africans were brought there as well – yet, the black presence in Argentina has virtually vanished from the country’s records and consciousness.

According to historical accounts, Africans first arrived in Argentina in the late 16th century in the region now called the Rio de la Plata, which includes Buenos Aires, primarily to work in agriculture and as domestic servants. By the late 18th century and early 19th century, black Africans were numerous in parts of Argentina, accounting for up to half the population in some provinces, including Santiago del Estero, Catamarca, Salta, and Córdoba.

In Buenos Aires, neighborhoods like Monserrat and San Telmo housed many black slaves, some of whom were engaged in craft-making for their masters. Indeed, blacks accounted for an estimated one-third of the city’s population, according to surveys taken in the early  1800s.

Slavery was officially abolished in 1813, but the practice remained in place until about 1853. Ironically, at about this time, the black population of Argentina began to plunge.

Historians generally attribute two major factors to this sudden “mass disappearance” of black Africans from the country – the deadly war against Paraguay from 1865 to 1870 (in which thousands of blacks fought on the frontlines for the Argentine military) as well as various other wars; and the onset of yellow fever in Buenos Aires in 1871.

The heavy casualties suffered by black Argentines in military combat created a huge gender gap among the African population – a circumstance that appears to have led black women to mate with whites, further diluting the black population. Many other black Argentines fled to neighboring Brazil and Uruguay, which were viewed as somewhat more hospitable to them.

Others claim something more nefarious at work.
It has been alleged that the president of Argentina from 1868 to 1874, Domingo Faustino Sarmiento, sought to wipe out blacks from the country in a policy of covert genocide through extremely repressive policies (including possibly the forced recruitment of Africans into the army and by forcing blacks to remain in neighborhoods where disease would decimate them in the absence of adequate health care).

Tellingly, Sarmiento wrote in his diary in 1848: “In the United States… 4 million are black, and within 20 years will be 8 [million]…. What is [to be] done with such blacks, hated by the white race? Slavery is a parasite that the vegetation of English colonization has left attached to the leafy tree of freedom.”

By 1895, there were reportedly so few blacks left in Argentina that the government did not even bother registering African-descended people in the national census.

But blacks did not really vanish from Argentina – despite attempts by the government to eliminate them (partially by encouraging large-scale immigration in the late 19th and 20th centuries from Europe and the Near East). Rather, they remain a hidden and forgotten part of Argentine society.

Hisham Aidi, a lecturer at Columbia University’s School of International and Public Affairs, wrote on Planete Afrique that in the 1950s when the black American entertainer Josephine Baker arrived in Argentina, she asked the mixed-race minister of public health, Ramon Carilio: “Where are the Negroes?” In response, Carilio joked: “There are only two — you and I.”

As in virtually all Latin American societies where blacks mixed with whites and with local Indians, the question of race is extremely complex and contentious.

“People of mixed ancestry are often not considered ‘black’ in Argentina, historically, because having black ancestry was not considered proper,” said Alejandro Frigerio, an anthropologist at the Universidad Catolica de Buenos Aires, according to Planete Afrique.

“Today the term ‘negro’ is used loosely on anyone with slightly darker skin, but they can be descendants of indigenous Indians [or] Middle Eastern immigrants.”

Africa Vive, a black empowerment group founded in Buenos Aires in the late 1990s, claimed that there are 1 million Argentines of black African descent in the country (out of a total population of about 41 million). A report in the Washington Post even suggested that 10 percent of Buenos Aires’ population may have African blood (even if they are classified as “whites” by the census).

“People for years have accepted the idea that there are no black people in Argentina,” Miriam Gomes, a professor of literature at the University of Buenos Aires, who is part black herself, told the Post.

“Even the schoolbooks here accepted this as a fact. But where did that leave me?”

She also explained that almost no one in Argentina with black blood in their veins will admit to it.

“Without a doubt, racial prejudice is great in this society, and people want to believe that they are white,” she said. “Here, if someone has one drop of white blood, they call themselves white.”

Gomes also told the San Francisco Chronicle that after many decades of white immigration into Argentina, people with African blood have been able to blend in and conceal their origins.

“Argentina’s history books have been partly responsible for misinformation regarding Africans in Argentine society,” she said. “Argentines say there are no blacks here. If you’re looking for traditional African people with very black skin, you won’t find it. African people in Argentina are of mixed heritage.”

Ironically, Argentina’s most famous cultural gift to the world – the tango – came from the African influence.

“The first paintings of people dancing the tango are of people of African descent,” Gomes added.

On a broader scale, the “elimination” of blacks from the country’s history and consciousness reflected the long-cherished desire of successive Argentine governments to imagine the country as an “all-white” extension of Western Europe in Latin America.

“There is a silence about the participation of Afro-Argentines in the history and building of Argentina, silence about the enslavement and poverty,” said Paula Brufman, an Argentine law student and researcher, according to Planete Afrique.

“The denial and disdain for the Afro community show the racism of an elite that sees Africans as undeveloped and uncivilized.”