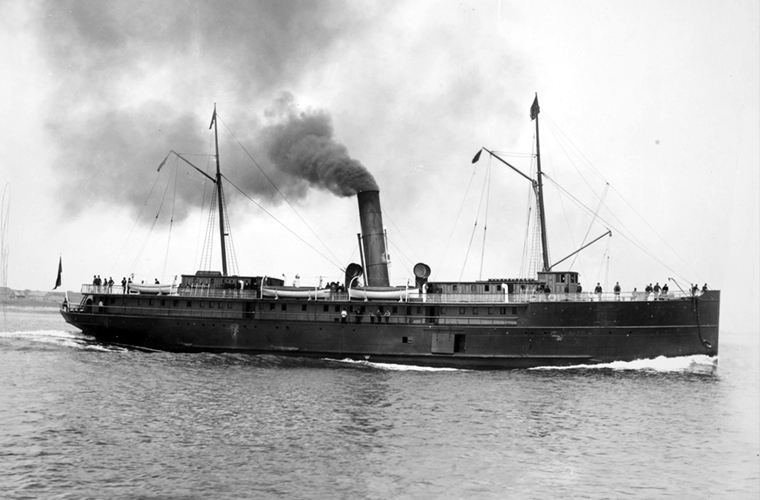 The Black Star Line was a steamship company completely owned, operated, and financed by people of African descent. Marcus Garvey (1887-1940), a Jamaican national and master propagandist, was the leader of this venture. He was a black nationalist and a leader of the pan-Africanism movement, which sought to unify and connect people of African descent worldwide. As the head of the Universal Negro Improvement Association (UNIA), he told members in 1921, that “If you want liberty you yourselves must strike the blow. If you must be free, you must become so through your own effort … Until you produce what the white man has produced you will not be his equal.”

At the height of his popularity, people referred to him as the “Black Moses.” This nickname took on new meaning after October 14, 1919, when George Tyler, a disgruntled investor in one of Garvey’s ventures, walked into the UNIA offices and shot Garvey with a .38 revolver, the bullet just grazing his temple. Tyler was apprehended, but the following day he leaped to his death from a third-floor jail cell in either a failed attempt at escape or suicide. Against the doctor’s orders, Garvey left the hospital, refusing to miss an opportunity to sell stock and promote his Black Star Line in Philadelphia. With the incident receiving worldwide publication in both the white and black presses, his popularity increased along with Black Star Line stock sales.

Garvey saw the Black Star Line as the solution to the black community’s problems–a company completely owned, operated, and financed by black people would create pride, free up the economic dependency on the white community, and create a strong economic base in the only independent nation in West Africa, Liberia. Similar to Booker T. Washington’s Tuskegee Normal and Industrial Institute, Marcus Garvey felt that economic development for black people would allow for social and political advancement.

The Black Star Line also became popular because of its intention to provide non-discriminatory travel for people of African descent. At this time, many steamship companies did not allow black people to purchase first-class tickets. The BSL empowered black people across the diaspora. Colonial governments in Africa, the Caribbean, and Central America felt threatened by this symbol of freedom and power. For example, colonial governments in the Caribbean banned The Negro World, the UNIA’s newspaper. These governments feared that the rise of the Black Star Line would cause blacks to recognize their oppression and fight for economic independence and political freedom.

The Black Star Line also offered employment opportunities to black seamen, who often had trouble finding steady work at this time. Many times, racial discrimination prevented sailors and shipyard workers from rising to leadership positions. With an exception of a few white officers, the Black Star Line employed an all-black crew. Stevedores, or dock workers who load and unload cargo from ships, saw the company as an opportunity to receive honest wages and a chance at fair treatment in the workplace.

Stock in the company sold for $5 per share, but the BSL also allowed for customers to pay in installments, giving those who were less well off a chance to invest in the company. Many investors felt that the BSL was important because they could simultaneously invest their money into a business and help uplift and improve conditions for members of their race.

Despite Garvey’s popularity, he and the other BSL officers had no real experience in the shipping industry or in business. Although Garvey’s intentions were good, his mishandling of funds caused problems for the company. Marcus Garvey hired Joshua Cockburn, one of the only black men living in the United States legally qualified to captain a ship. While having a black man head the ship was good for promotion and sales, Cockburn’s personal greed caused many mishaps for the company. He purchased the S.S. Yarmouth, a small, 1,452 ton-ship built in 1887 and rebuilt in 1917. Cockburn took a $1,600 bribe from the ship’s owners, who then grossly inflated the cost of the ship.

The Yarmouth failed to turn a profit on her three voyages. Her defective boilers could no longer be repaired. Unseaworthy, the ship sold at auction in November 1921 for $1,625.00. The BSL never finished paying for the ship. Yarmouth’s operating losses totaled $136,011.62, excluding her exorbitant sale price. The Black Star Line also purchased the Shady Side and Kanawha – both suffered similar fates.

Although the company suffered due to mismanagement, the Black Star Line’s receptions at the ports of call demonstrate the hope and pride in the company felt throughout the diaspora. When the Yarmouth arrived in Cuba on December 2, 1919, Cockburn noted, “People are just crazy about the organization”. The local stevedores purchased $250 worth of stock–believing in the promise of an all-black corporation and the chance to battle racist white shippers in the Caribbean who provided low wages and poor hours in the hope that the BSL would offer them fair rates. Thousands also sent money in from across the globe. One BSL daily transaction report dated January 7, 1920, showed $630.81 that came in from Cuba, West Africa, and the Panama Canal Zone.

Despite the BSL’s promise, the Federal Government targeted Garvey. The Bureau of Investigation (BOI), a precursor to the FBI, opened a file in 1918, and surveillance on him continued until 1923. A report dated July 10, 1919, called Garvey, “the most prominent negro radical agitator in New York.” Many did their best to discredit and stop Garvey’s endeavors, including the bureau’s J. Edgar Hoover, the Justice Department’s Edwin P. Kilroe, and black integrationists like W.E.B. Du Bois of the NAACP, Secretary of the NAACP James Weldon Johnson, and A. Philip Randolph, editor of the Messenger. The BOI planted spies at UNIA rallies and in the Black Star Line office.

The bureau was focused on trying to deport foreign radicals and tried to revoke the second-class mailing permit of the UNIA’s newspaper, the Negro World, claiming that Garvey preached race hatred and promoted conflict in Africa. This occurred during the First Red Scare, a period during the early 20th-century history of the United States marked by a widespread fear of Bolshevism and anarchism. At its height in 1919–20, concerns over the effects of radical political agitation in American society and the alleged spread of communism and anarchism in the American labor movement fueled a general sense of concern.

At the same time, the bureau desegregated and a new wave of black informants tried to find evidence of crimes in order to deport Garvey. One such informant, James Wormley Jones (Agent 800), worked his way up the ranks and even chaired a committee to audit the Black Star Line books. He suggested the bureau indict Garvey under the Mann Act, an interstate law in which traveling with a woman for illicit or immoral reasons is against the law. It is the same law that heavyweight champion Jack Johnson faced in 1912 for marrying a white woman.

Jones’s replacement was a Jamaican man named Herbert S. Boulin (Agent P-136). Agent P-136 became a confidante of Garvey, but also never found evidence of crimes. Other agents posed as newspaper reporters or church representatives. Searching for disgruntled customers, the BOI came up empty-handed, finding investors mostly satisfied with the BSL and did not seek any action against the company or Garvey himself.

The Federal Government finally arrested Garvey on January 15, 1922, for sending a circular about a ship the company had not yet purchased. The only evidence put forth was the envelope that may or may not have contained the circular in question. Although the BSL was in negotiation for a ship and had deposited $22,500.00 for the SS Orion, the Federal Government still indicted him. Despite Garvey’s mishandling of funds, the bureau did not follow through with those specific charges. His co-defendants were acquitted–proving that the FBI had only one target, Garvey himself.

He was convicted on charges of mail fraud in 1923. The Attorney General, John Sargent, received a petition with 70,000 signatures urging Garvey’s release. Sargent warned President Calvin Coolidge that African-Americans were regarding Garvey’s imprisonment not as a form of justice against a man who had swindled them but as “an act of oppression of the race in their efforts in the direction of race progress.” Eventually, Coolidge agreed to commute the sentence so that it would expire immediately, on November 18, 1927. Garvey was deported straight after his release.