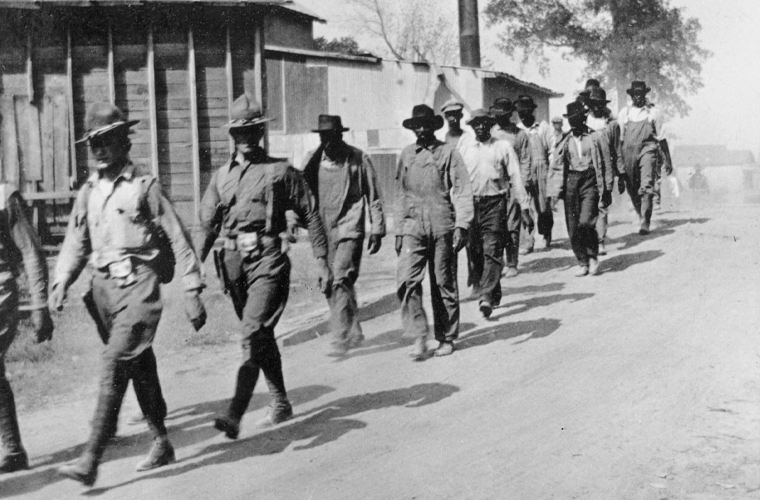 White Arkansans, fearful of what would happen if African-Americans organized, took violent action, but it was the victims who ended up standing trial

The sharecroppers who gathered at a small church in Elaine, Arkansas, in the late hours of September 30, 1919, knew the risk they were taking. Upset about unfair low wages, they enlisted the help of a prominent white attorney from Little Rock, Ulysses Bratton, to come to Elaine to press for a fairer share in the profits of their labor. Each season, landowners came around demanding obscene percentages of the profits, without ever presenting the sharecroppers detailed accounting and trapping them with supposed debts.

“There was very little recourse for African-American tenant farmers against this exploitation; instead there was an unwritten law that no African-American could leave until his or her debt was paid off,” writes Megan Ming Francis in Civil Rights and the Making of the Modern American State. Organizers hoped Bratton’s presence would bring more pressure to bear through the courts. Aware of the dangers – the atmosphere was tense after racially motivated violence in the area – some of the farmers were armed with rifles.

At around 11 p.m. that night, a group of local white men, some of whom may have been affiliated with local law enforcement, fired shots into the church. The shots were returned, and in the chaos, one white man was killed. Word spread rapidly about the death. Rumors arose that the sharecroppers, who had formally joined a union known as the Progressive Farmers and Household Union of America (PFHUA) were leading an organized “insurrection” against the white residents of Phillips County.

Governor Charles Brough called for 500 soldiers from nearby Camp Pike too, as the Arkansas Democrat reported on Oct 2, “round up” the “heavily armed negroes.” The troops were “under order to shoot to kill any negro who refused to surrender immediately.” They went well beyond that, banding together with local vigilantes and killing at least 200 African-Americans (estimates run much higher but there was never a full accounting). And the killing was indiscriminate—men, women, and children unfortunate enough to be in the vicinity were slaughtered. Amidst the violence, five whites died, but for those deaths, someone would have to be held accountable.

Out of this tragedy, known as the Elaine massacre, and its subsequent prosecution would come to a Supreme Court decision that would upend years of court-sanctioned injustice against African-Americans and would secure the right of due process for defendants placed in impossible circumstances.

Despite its impact, little about the carnage in Elaine was unique during the summer of 1919. It was part of a period of vicious reprisals against African-American veterans returning home from World War I. Many whites believed that these veterans (including Robert Hill, who co-founded PFHUA) posed a threat as they claimed greater recognition for their rights at home. Even though they served in large numbers, black soldiers “realized over the course of the war and in the immediate aftermath that their achievement and their success actually provoked more rage and more vitriol than if they had utterly failed,” says Adriane Lentz-Smith, associate professor of history at Duke University and author of Freedom Struggles: African Americans and World War I.

During the massacre, Arkansan Leroy Johnston, who had spent nine months recovering in a hospital from injuries he suffered in the trenches of France – was pulled from a train shortly after returning home and was shot to death alongside his three brothers. In places like Phillips County, where the economy directly depended on the predatory system of sharecropping, white residents were inclined to view the activities of Hill and others as the latest in a series of dangerous agitations.

In the days after the bloodshed in Elaine, local media coverage continued to fan the flames daily, reporting sensational stories of an organized plot against whites. A seven-man committee was formed to investigate the killings. Their conclusions all too predictable: the following week they issued a statement in the Arkansas Democrat declaring the gathering in Elaine a “deliberately planned insurrection if the negroes against the whites” led by the PFHUA, whose founders used “ignorance and superstition of a race of children for monetary gains.”

The paper claimed every individual who joined was under the understanding that “ultimately he would be called upon to kill white people.” A week later, they would congratulate themselves on the whole episode and their ability to restore order confidently claiming that not one slain African-American was innocent. “The real secret of Phillips county’s success…” the newspaper boasted, is that “the Southerner knows the negro through several generations of experience.”

To counter this accepted narrative, Walter White, a member of the NAACP whose appearance enabled him to blend in with white residents, snuck into Phillips County by posing as a reporter. In subsequent articles, he claimed that “careful examination…does not reveal the ‘dastardly’ plot which has been charged” and that indeed the PFHUA had no designs on an uprising. He pointed out that the disparity in death toll alone belied the accepted version of events. With African-Americans making up a significant majority of local residents, “it appears that the fatalities would have been differently proportioned if a well-planned murder plot had existed among the Negroes,” he wrote in The Nation. The NAACP also pointed out in their publication The Crisis that in the prevailing climate of unchecked lynchings and mob violence against African-Americans, “none would be fool enough” to do so. The black press picked up the story and other papers began to integrate White’s counter-narrative into their accounts, galvanizing support for the defendants.

The courts were another matter altogether. Dozens of African-Americans became defendants in hastily convened murder trials that used incriminating testimony coerced through torture, and 12 men were sentenced to death. Jury deliberations lasted just moments. The verdicts were a foregone conclusion – it was clear that had they not been slated for execution by the court, the mob would have done so even sooner.

“You had 12 black men who were clearly charged with murder in a system that was absolutely corrupt at the time – you had mob influence, you had witness tampering, you had a jury that was all-white, you had almost certainly judicial bias, you had the pressure of knowing that if you were a juror in this case that you would almost certainly not be able to live in that town…if you decided anything other than a conviction,” says Michael Curry, an attorney, and chair of the NAACP Advocacy and Policy Committee. No white residents were tried for any crime.

The outcome, at least initially, echoed an unyielding trend demonstrated by many a mob lynching: for African-American defendants, accusation, and conviction were interchangeable.

Nonetheless, the NAACP launched a series of appeals and challenges that would inch their way through Arkansas state courts and then federal courts for the next three years, an arduous series of hard-fought victories and discouraging setbacks that echoed previous attempts at legal redress for black citizens. “It’s a learning process for the NAACP,” says Lentz-Smith. “[There is] a sense of how to do it and who to draw on and what sort of arguments to make.” The cases of six of the men would be sent for retrial over a technicality, while the other six defendants – including named plaintiff Frank Moore – had their cases argued before the United States Supreme Court. The NAACP’s legal strategy hinged on the claim that the defendants’ 14th Amendment right to due process had been violated.

In February 1923, by a 6-2 margin, the Court agreed. Citing the all-white jury, lack of opportunity to testify, confessions under torture, denial of a change of venue and the pressure of the mob, Justice Oliver Wendell Holmes wrote for the majority that “if the case is that the whole proceeding is a mask – that counsel, jury, and judge were swept to the fatal end by an irresistible wave of public passion,” then it was the duty of the Supreme Court to intervene as guarantor of the petitioners’ constitutional rights where the state of Arkansas had failed.

The verdict marked a drastic departure from the Court’s longstanding hands-off approach to the injustices happening in places like Elaine. “This was a seismic shift in how our Supreme Court was recognizing the rights of African-Americans,” says Curry. After a long history of having little recourse in courts, Moore vs. Dempsey (the defendant was the keeper of the Arkansas State Penitentiary) preceded further legal gains where federal courts would weigh in on high-profile due process cases involving black defendants, including Powell vs. Alabama in 1932, which addressed all-white juries, and Brown vs. Mississippi in 1936, which ruled on confessions extracted under torture.

Moore vs. Dempsey provided momentum for early civil rights lawyers and paved the way for later victories in the ’50s and ’60s. According to Lentz, “when we narrate the black freedom struggle in the 20th century, we actually need to shift our timeline and the pins we put on the timeline for the moments of significant breakthrough and accomplishments.” Despite Moore vs. Dempsey being relatively obscure, “if the U.S. civil rights movement is understood as an effort to secure the full social, political, and legal rights of citizenship, then 1923 marks a significant event,” writes Francis.

The ruling also carried broad-ranging implications for all citizens in terms of federal intervention in contested criminal cases. “The recognition that the state had violated the procedural due process, and the federal courts actually weighing in on that was huge,” says Curry. “There was a deference that was being paid to state criminal proceedings, then this sort of broke that protection that existed for states.”

The sharecroppers that had gathered in Elaine had a simple goal: to secure a share in the profits gained from their work. But the series of injustices the events of that night unleashed would – through several years of tenacious effort – end up before the nation’s highest court and show that the longstanding tradition of declaring African-Americans guilty absent constitutional guarantees would no longer go unchallenged.