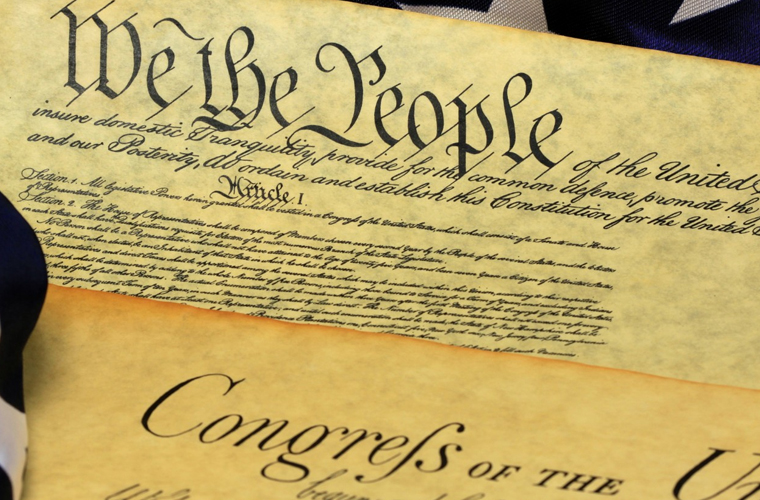 The First Amendment to the U.S. Constitution protects the freedom of speech, religion, and the press. It also protects the right to peaceful protest and to petition the government. The amendment was adopted in 1791 along with nine other amendments that make up the Bill of Rights – a written document protecting civil liberties under U.S. law. The meaning of the First Amendment has been the subject of continuing interpretation and dispute over the years. Landmark Supreme Court cases have dealt with the right of citizens to protest U.S. involvement in foreign wars, flag burning and the publication of classified government documents.

During the summer of 1787, a group of politicians, including James Madison and Alexander Hamilton, gathered in Philadelphia to draft a new U.S. Constitution.

Anti federalists, led by the first governor of Virginia, Patrick Henry, opposed the ratification of the Constitution. They felt the new constitution gave the federal government too much power at the expense of the states. They further argued that the Constitution lacked protections for people’s individual rights.

The debate over whether to ratify the Constitution in several states hinged on the adoption of a Bill of Rights that would safeguard basic civil rights under the law. Fearing defeat, pro-constitution politicians, called Federalists, promised a concession to the anti-federalists – a Bill of Rights.

The First Amendment text reads:
“Congress shall make no law respecting an establishment of religion, or prohibiting the free exercise thereof, or abridging the freedom of speech, or of the press, or the right of the people peaceably to assemble, and to petition the Government for a redress of grievances.”

While the First Amendment protected freedoms of speech, religion, press, assembly, and petition, subsequent amendments under the Bill of Rights dealt with the protection of other American values including the Second Amendment right to bear arms and the Sixth Amendment right to a trial by jury.

The First Amendment guarantees freedom of speech. Freedom of speech gives Americans the right to express themselves without having to worry about government interference. It’s the most basic component of freedom of expression.

The U.S. Supreme Court often has struggled to determine what types of speech is protected.

Some types of speech are not protected under the First Amendment. Speech provoking actions that would harm others – shouting “fire” in a crowded theater, for instance – is not protected. Freedom of speech also doesn’t include the right to make or distribute obscene materials. This freedom is similar to freedom of speech, in that it allows people to express themselves through publication.

There are certain limits to freedom of the press. False or defamatory statements – called libel – aren’t protected under the First Amendment.

The First Amendment, in guaranteeing freedom of religion, prohibits the government from establishing a “state” religion and from favoring one religion over any other.

While not explicitly stated, this amendment establishes the long-established separation of church and state.

The First Amendment protects the freedom to peacefully assemble or gather together or associate with a group of people for social, economic, political or religious purposes. It also protects the right to protest the government.

The right to petition can mean signing a petition or even filing a lawsuit against the government.