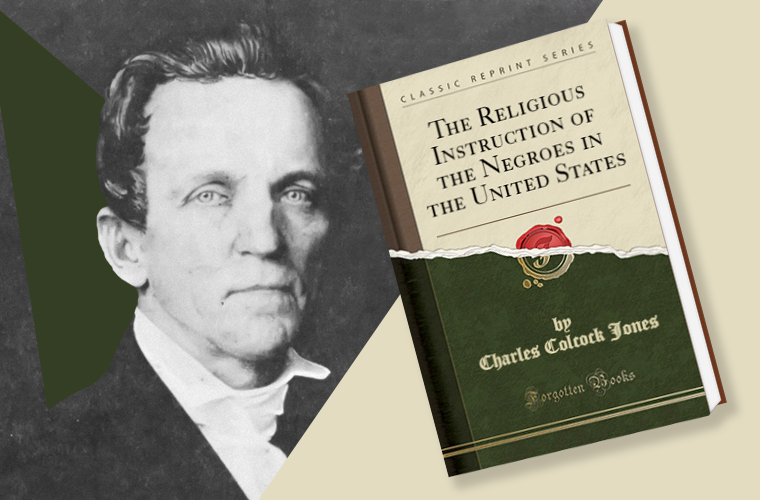 Charles Colcock Jones, Sr. (1804 –1863) was a Presbyterian clergyman, educator, missionary, and planter of Liberty County, Georgia. While in the North, Jones agonized over the morality of owning slaves, but he returned to Liberty County to become a planter and a missionary to slaves. He served as pastor of the First Presbyterian Church of Savannah, Georgia (1831–32), Professor of church history and polity at Columbia Theological Seminary, Columbia, South Carolina, (1835–38), returned to missionary work in 1839, and was again Professor at Columbia Seminary (1847–50). He spent the remainder of his life supervising his three plantations, Arcadia, Montevideo, and Maybank while continuing his evangelization of slaves. Besides many tracts and papers, Jones published The Religious Instruction of the Negroes in the United States (1842) and a History of the Church of God (1867).

His Catechism of Scripture Doctrine and Practice (1837) was translated into Armenian and Chinese. In 1972, literary critic Robert Manson Myers published a huge collection of Jones family letters in The Children of Pride, a work of more than 1,800 pages, the book won a National Book Award (1973). In 2005, historian Erskine Clarke published Dwelling Place: A Plantation Epic based on an even larger collection of Jones family correspondence, it won a Bancroft Prize (2006). Mr. Jones, the author of this volume, had for years manifested a deep interest in the religious improvement of his colored fellow-men. He was a minister of the gospel, resident in Georgia, and connected ecclesiastically with the Presbyterian denomination. This book contains a historical sketch of the religious instruction of the negroes from 1620 to 1842—treats of the moral and religious condition of the negroes; of the obligations of the church to improve that condition by giving them the gospel—and proposes plans for securing their religious instruction.

Mr. Jones weighs well all objections to the course proposed and meets them on Scriptural grounds: so that it must be difficult for a minister of the gospel or a private Christian to read and not be reproved. Under the head of the obligations of the church to the negroes, the author speaks out plainly and forcibly, first to the church in slaveholding states on their duties to the slaves, then to Christians in the free states on their duty to afford the gospel to free negroes within their limits. To the former he says: “We cannot cry out against Papists for withholding the Scriptures from the common people, if we withhold the Bible from our servants, and keep them in ignorance of its saving truths, which we certainly do whilst we will not provide ways and means of having it read and explained to them.” Appeals, such as Mr. Jones made, to the consciences of Christians in the South, adapted to prepare the way, as rapidly as any other preparatory measures, for the ultimate breaking of all the fetters of bondage and letting the oppressed and captive go free.