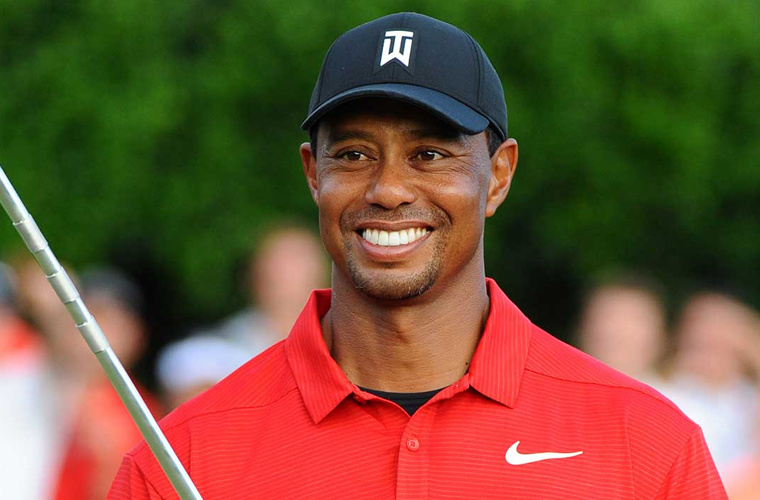 Tiger Woods, byname of Eldrick Woods, (born December 30, 1975, Cypress, California, U.S.), American golfer who enjoyed one of the greatest amateur careers in the history of the game and became the dominant player on the professional circuit in the late 1990s and early 2000s. In 1997 Woods became the first golfer of either African American or Asian descent to win the Masters Tournament, one of the most prestigious events in the sport. With his victory at the 2001 Masters, Woods became the first player to win consecutively the four major tournaments of golf—the Masters, the U.S. Open, the British Open (Open Championship), and the PGA Championship.

Woods was the child of an African American father and a Thai mother. A naturally gifted player, he took up golfing at a very young age and soon became a prodigy, taking swings on a television program when he was two years old and shooting a 48 over nine holes at age three. In 1991, at age 15, he became the youngest winner of the U.S. Junior Amateur Championship; he also captured the 1992 and 1993 Junior Amateur titles. In 1994 he came from six holes behind to win the first of his three consecutive U.S. Amateur Championships. He enrolled at Stanford University in 1994 and won the collegiate title in 1996. After claiming his third U.S. Amateur title, Woods left college and turned professional on August 29, 1996. Playing as a pro in eight PGA events in 1996, he won two titles and was named the PGA Tour’s Rookie of the Year.

Woods was able to generate such club speed that he routinely hit drives of more than 300 yards. His booming long game, coupled with his expert putting and chipping and his reputation for mental toughness, made him an intimidating opponent and a popular player among fans. At the 1997 Masters Tournament in Augusta, Georgia, Woods shot a tournament record 270 over 72 holes and finished 12 strokes ahead of the rest of the field in one of the most dominating performances in the history of professional golf. In 1999 he became the first golfer in more than two decades to win eight PGA tournaments in a year. His six consecutive victories (1999–2000) tied Ben Hogan’s 1948 streak, the second longest in PGA history; Byron Nelson holds the record with 11 straight wins. In June 2000 Woods again made history with his record-breaking win at the U.S. Open. He became the first player to finish the tournament at 12 under par, tying Jack Nicklaus for the lowest 72-hole score (272), and Woods’s 15-stroke victory was the largest winning margin at a major championship. On July 23, 2000, Woods became the fifth player in golf history, and the youngest, to complete the career Grand Slam of the four major championships by winning the British Open. (In 1930, when Bobby Jones won the only calendar-year Grand Slam, the four major tournaments were the U.S. Open, the British Open, the U.S. Amateur, and the British Amateur championships.) Woods’s victory by a comfortable 8 strokes was a record-setting 19 strokes under par. He won back-to-back Masters titles in 2001 and 2002.

In 2005, after a drought of 10 winless major tournaments, Woods won the Masters and the British Open. He dominated the tour the following year, winning nine events, including the British Open and the PGA Championship. In 2007 he defended his title at the latter tournament to claim his 13th major championship. Some two months after undergoing knee surgery in 2008, Woods captured his third U.S. Open title in his first tournament back on the tour, completing his third career Grand Slam, a feat matched only by Nicklaus. Woods’s dramatic U.S. Open victory—which involved an 18-hole playoff round followed by a sudden-death play-off—aggravated the damage to his knee, and the following week he withdrew from the remainder of the 2008 golf season in order to have more-extensive knee surgery. His return to the sport in 2009 featured a number of tournament wins but no major titles for the first time since 2004. Also in 2009 Woods’s unprecedented streak of having never lost a major tournament when leading or co-leading after 54 holes were broken at 14 when he lost the PGA Championship after being ahead by two strokes before the final round.

In November 2009 Woods was involved in an early morning one-car accident outside his home in Orlando, Florida. The unusual circumstances of the crash led to a great deal of media scrutiny into his personal life. It was revealed that Woods, who had married Elin Nordegren in 2004, had a number of extramarital affairs, and his infidelity—which clashed with the solid-citizen reputation that had helped him earn hundreds of millions of dollars in endorsements over the years—became national news. The following month, Woods announced that he was taking an indefinite leave from golf in order to spend more time with his family. He returned to the sport in April 2010 for the Masters Tournament. Although Woods finished in the top five at both the Masters and the U.S. Open, his 2010 golf season was a disappointment that included no tournament wins and the worst four-round score of his professional career. In addition, he and Nordegren divorced in August of that year.

Woods’s difficulties on the golf course continued in 2011 as he failed to win an official PGA tournament. His drought finally ended on March 25, 2012, when he won the Arnold Palmer Invitational; it was his first PGA victory in some 30 months. In July 2012 Woods won the AT&T National tournament for his 74th career PGA victory, passing Nicklaus for the second highest win total in tour history. In March 2013 he won the Arnold Palmer Invitational for an eighth time—tying a PGA record for most career victories in a single tournament in the process—and regained the number one world ranking for the first time in nearly two and a half years. Although Woods failed to win a major in 2013, his five event wins during the season helped him retain his top ranking through the end of the year. However, his following year was disastrous, as he missed long stretches of the PGA season because of persistent back pain and played in just nine PGA Tour events in 2014, with his best finish in those tournaments being a tie for 25th place. Woods’s struggles on the course persisted into 2015. He appeared in only 11 events that year, missing the cut in consecutive majors (the U.S. and British opens) for the first time in his career, and ended his season in September to undergo another surgery on his back. Woods struggled to recover from that surgery, and he missed the entire 2016 golf season.

In January 2017 he made his first appearance in a PGA Tour event in 17 months. However, he played in just that tournament before announcing that he would undergo another back surgery that would force him to miss the remainder of the 2017 season. Woods’s personal life again came to the forefront in May 2017 when he was arrested on suspicion of driving under the influence of a combination of sleep and pain medications. He subsequently revealed that he was receiving “professional help” to manage his medication intake. Woods returned to the PGA Tour in January 2018, and he subsequently played a full tour season. He capped off his improbable comeback from his series of potentially career-ending injuries by winning the Tour Championship tournament in September, his first victory in five years.