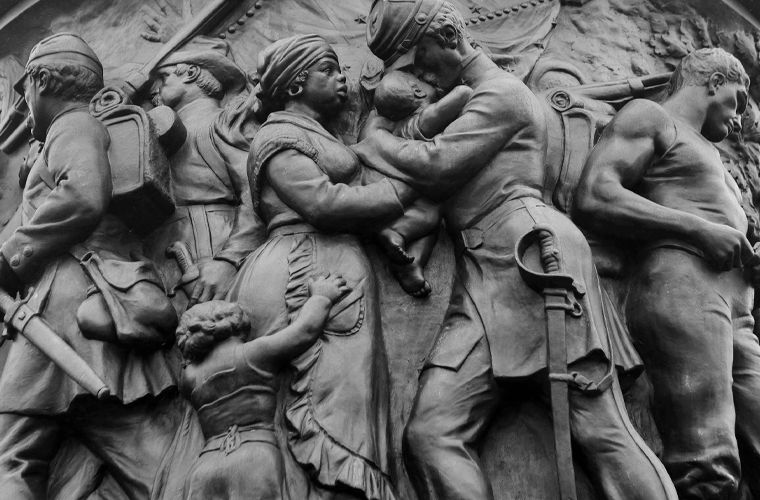 A 1923 fight shows Confederate monuments are about power, not Southern heritage.

In 1923, a group of white women wanted to build what they called a “monument to the faithful colored mammies” in Washington. These women, members of the United Daughters of the Confederacy, pressed lawmakers in Congress to introduce a bill. The Senate passed it, but the bill stalled in the House after fierce opposition from black women, including Mary Church Terrell and Hallie Quinn Brown, members of the National Association of Colored Women.

The fight over a proposed monument to black “mammies” exposes the lie of those who describe Confederate monuments as innocuous celebrations of Southern heritage. Lost Cause memorials are hurtful public symbols of white supremacy. Consider that most Confederate monuments were not erected by grieving widows or relatives immediately after the Civil War. A majority were put up in the 1890s and early 1900s by Southern whites hoping to justify the spread of Jim Crow while erasing the legacy of Reconstruction, a time when African-Americans had gained citizenship and voting rights.

There are now more than 1,740 Confederate monuments, statues, flags, place names and other symbols in public spaces across the country, not counting more than 2,600 markers, battlefields, museums and cemeteries that commemorate the Confederate dead or the many hundreds of statues of staunch segregationists. To date, only about 115 have been removed. In stark contrast, fewer than 100 monuments pay tribute to the civil rights movement.

Ulric Stonewall Jackson Dunbar working on a model of a statue titled “Mammy” that came close to being built in Washington in 1923.

Southern white women in organizations like the United Daughters of the Confederacy, founded in 1894, raised funds to build many of the Confederate memorials and placed “loyal slave” plaques nearby. These celebrations of the “loyalty” of formerly enslaved people implied they had been happier insubordination, were still unequal and so should be segregated and treated as inferiors. In addition to the plaques, many formal monuments to “faithful slaves” were proposed; three were built, including the Faithful Slave Monument in Fort Mill, S.C., in 1895.

The United Daughters of the Confederacy’s most successful attempt at memorializing slavery at the national level happened during the presidency of Woodrow Wilson, who institutionalized segregation in the federal government. In 1914, the organization championed the Confederate Monument at Arlington National Cemetery, which features panels depicting “loyal” slaves and a “mammy” figure with two white children in tow. Whites’ affection for “colored mammies” glossed over the violence and pain inflicted upon enslaved women who had their families torn apart.

But African-American clubwomen and reformers did not accept the “mammy” stereotype. Many were the daughters and granddaughters of enslaved women who had been forced to work as caretakers of other women’s children. They quickly mobilized and led their African-American allies in the N.A.A.C.P. and the black press in the fight against the proposed monument through letters to editors. Their defiant resistance made white Americans take notice.

The civil rights and feminist activist Mary Church Terrell wrote a widely reproduced editorial in The Evening Star, a white Washington newspaper. Indicting the Southern white women who proposed the monument, Terrell’s scathing critique called out their past and current complicity in the sexual abuse of black women by white men: “When one considers the extent to which the black ‘Mammy’ was the victim of the passion and power of her master or any other white man who might look with lustful eyes upon her,” she wrote, it’s difficult to understand how “the wives, mothers, and sisters of slave owners could have submitted without frequent and vigorous protests to such degradation of the womanhood of any race.” She added, “And it is harder to understand why their descendants should want to behold a perpetual reminder of the heart-rending conditions under which Black Mammies were obliged to live.”

Terrell asked her readers to view enslaved black women as three-dimensional human beings who were psychologically tormented by the prospect of having their children sold. Being forced to care for white children also came at the price of not taking care of their own children. Cutting to the heart of the myth of the nonproblematic love whites imagined they had given to and received from enslaved women, Terrell condemned these monuments as actively rewriting the history of slavery. Asserting the authority of the black community to define and value itself, she vowed that black women would do everything they could to resist the building of the monument.

Monuments can either work to dismantle white supremacy, as does the stunning new memorial to victims of lynchings in Montgomery, Ala., or they can perpetuate it. The symbols of white supremacy have no business in our public spaces.