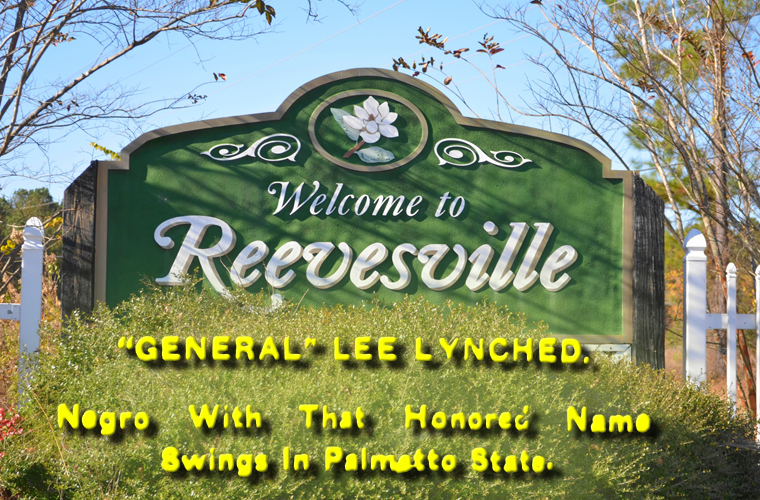 On January 13, 1904, a mob of white people lynched a Black man known as General Lee in Reevesville, South Carolina, for allegedly knocking on the door of a white woman’s house. The night before, a white woman reported that she had opened the door to her home after hearing a knock and saw a Black man running away from her house.

The next day, a group of white men from the town went to the local magistrate to seek a warrant for the arrest of Mr. Lee, whose foot they claimed could have made a track similar to the ones found outside the woman’s home. Authorities arrested Mr. Lee on the evening of January 13 and charged him with “criminally assaulting a white woman” for allegedly knocking on her door.

One mile outside of Reevesville, a mob of 50 white men seized Mr. Lee from police officers who were transferring him by buggy to a local jail. The police officers who abandoned Mr. Lee reported hearing gunshots as they fled the scene. Two days later, Mr. Lee was found tied to a tree and shot to death. Newspapers reported that the woman who reported the alleged “crime” knew Mr. Lee and never claimed she believed he was the man at her home that night.

No one was arrested in connection to the murder of General Lee. In a letter to the Governor of South Carolina, the local sheriff in Reevesville justified the mob’s actions by suggesting that Mr. Lee was in “bad-standing” with the local community and that people were surprised Mr. Lee “had not been dealt with in like manner several years ago.”

During this era of racial terror, white allegations against Black people were rarely subject to scrutiny and often sparked violent reprisal even when, as here, there was no evidence tying the accused to any offense. Between 1877 and 1950, thousands of Black men were lynched in the U.S., and nearly 1 in 4 were targeted based on the allegation of raping a white woman. These men were subjected to mob murder without investigation or trial, at a time when the definition of Black-on-white “rape” in the South was incredibly broad and required no allegation of force because white institutions, laws, and most white people rejected the idea that a white woman could or would willingly consent to sex with a Black man. This meant that any action by a Black man that could be interpreted as seeking or desiring contact with a white woman might prove deadly. Throughout the lynching era, Black men were lynched for delivering a letter to a white woman, for entering a room where white women were sitting, or, as Mr. Lee was, for knocking on the door of a white woman’s home.