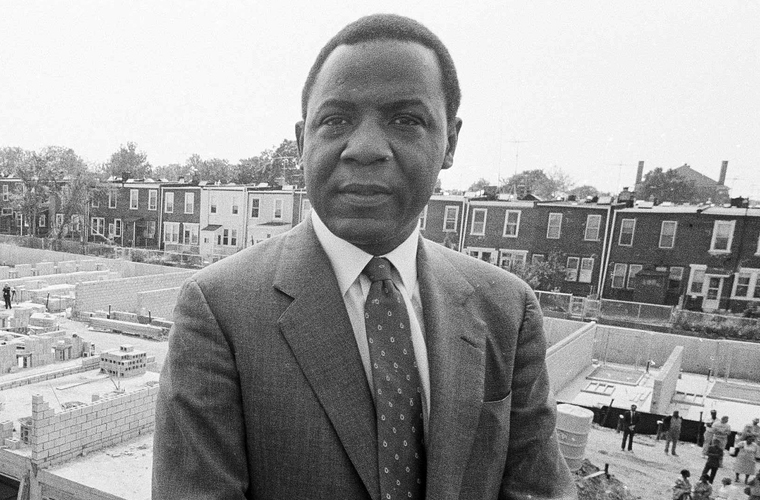 Best known as the first African American Mayor of Philadelphia, Woodrow Wilson Goode was born in 1938 into a family of tenant farmers near the town of Seaboard, North Carolina. Goode moved to Philadelphia with his family in 1954.

In 1961, he received a B.A. from Morgan State University in Maryland. He then attended the University of Pennsylvania where he graduated with a Master’s in Public Administration in 1971. After graduation, Goode worked as a probation officer, a supervisor of a building maintenance firm, and an insurance claim adjuster.

Goode’s first foray into politics came when he managed the unsuccessful mayoral campaign of State Representative Hardy Williams in 1971. In 1979 Goode was appointed to head the Pennsylvania Public Utility Commission and later, between 1980 and 1983, he served in Mayor William J. Green’s administration as Managing Director of the City of Philadelphia.

As city manager, Wilson Goode held neighborhood meetings to address city problems and brought fiscal efficiency by streamlining functions and operations in City Hall. He promoted his public image by riding garbage trucks to monitor the progress of sanitation workers and actively participated in neighborhood cleanups.

In 1983, when Philadelphia Mayor William Green announced his intention to step down, Goode immediately entered the race. He campaigned on downtown streets, greeting rush hour traffic commuters while gaining the endorsement of 67 of the 69 Democratic ward leaders and the majority of the city’s labor unions. Goode defeated former Philadelphia Mayor Frank Rizzo in the Democratic Primary. He won the general election against Philadelphia Stock Exchange Chairman John Egan, the Republican nominee, with 55% of the vote for Mayor.

Although Goode as mayor continued his efforts to make city government more efficient, his term was marred by the MOVE incident in the Spring of 1985. Philadelphia police attempted to remove a group of black nationalists who called themselves MOVE from a West Philadelphia home after neighbors complained about their erratic behavior. They requested and received permission from Mayor Goode to use an explosive device on the roof of the building. The explosion ignited a fire which killed six adults and five children in the house occupied by MOVE. The fire then spread through the neighborhood destroying sixty-two homes. Mayor Goode was blamed for the tragic episode and barely managed to survive re-election in 1987.

Goode left office in 1991 and worked briefly with the U.S. Department of Education in Washington, D.C. before returning to Philadelphia. Goode also became an ordained minister and advocate of faith-based initiatives which worked with senior citizens and former prisoners. Wilson Goode, Jr. followed his father into Philadelphia politics and was elected to the Philadelphia City Council in 1999.