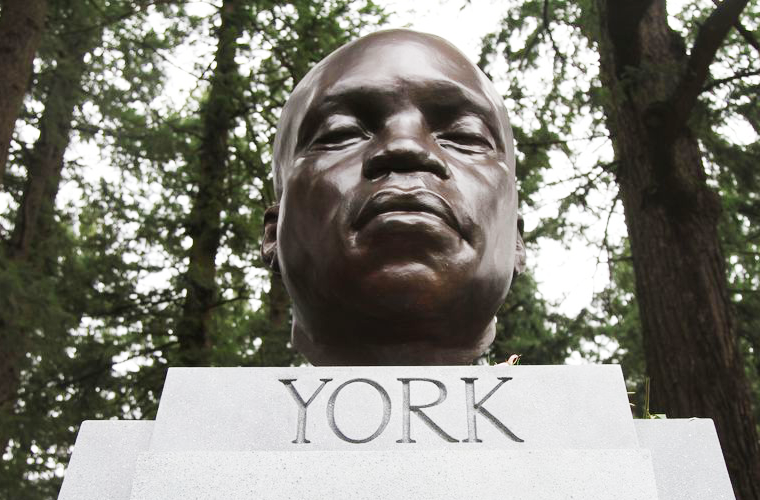 A black man by the name of York accompanied the Lewis and Clark expedition as a slave to Clark. He had been a childhood companion to William Clark and made invaluable contributions to the expedition on many occasions. Clark reported that York was especially attentive to Sergeant Floyd during his final days. York also risked his life to save Clark in a flash flood on the Missouri River near Great Falls in present-day Montana.

York participated in the hunts to bring game to the camp. He helped put up tents, managed sails and helped with the rowing. In short, he did all the things that everyone else did. He made his contributions and was part of the team.

York was also a curiosity to the Indians. Most had never seen a black man. They were intrigued by his color and there is the story about a Mandan chief trying to rub the black off of York’s skin. Yet the Indians loved York. They respected him. Indian children and women frequently followed him around because of his powerful build and his uniqueness.

Make no mistake, York was not a servant, but a slave owned by William Clark. However, for a brief period in his life, York was relatively “free.” He had his own rifle and got to vote on matters related to the expedition. He was a full member of the expedition.

Think what it must have been like for York to re-enter a world of slavery after the expedition. To Clark’s credit, he eventually arranged for York’s legal freedom. But think what it would be like to be an African American free man in a world surrounded by race and slavery. You are free only because a piece of paper states you are free. At heart you are always on the edge of respectability, on the edge of freedom.

Sacagawea was a teenage Shoshone Indian girl who joined the expedition from the Mandan Villages on. She had been captured from her Shoshone tribe by another tribe of Indians, the Hidatsas. Her captors gave her to her husband, a French Canadian over 40 years old. Her husband, Toussaint Charbonneau, was an independent trader who lived among the Hidatsas. Sacagawea was pregnant when she accompanied her husband and a group of mostly white men on an 8,000-mile journey for 28 months into some of America’s most dangerous territories. Lewis and Clark accepted Charbonneau’s offer to join them as an interpreter, not so much because of his abilities, but because of his wife, Sacagawea. Sacagawea spoke Shoshone as well as Hidatsa, and a little French.

Sacagawea played a very important role in the success of the expedition, but not as a guide. Instead, she was a person who could “read” the landscape fairly well. She could read the rivers and the valleys. She had a sense of what the landscapes said about direction, where they were, and where they were going. She also had a sense of what could be eaten along the way as well as finding food. Her service as an interpreter was valuable when she negotiated with the Shoshone for horses. Without those horses, who knows what would have happened to the expedition.

On August 17, 1806, Lewis and Clark prepared to return to St. Louis and “settled up” with Charbonneau. He received approximately $500 for his horse, his tepee, and his services. Sacagawea received nothing.

Unfortunately, there is a sad ending to the story of Sacagawea, but it is not known for sure what happened to her. One story indicated that she eventually moved to St. Louis. The last sighting of her was in 1811 when a traveler described her as a woman wearing the cast-off clothing of white women, wandering through St. Louis, seemingly alone. She had given up her children to the care of William Clark. Whatever happened to Sacagawea after the expedition, it appears that she died in about 1812 when she would have been in her early twenties.

Clark did pay tribute to Sacagawea in a letter to Charbonneau referring to her as, “Your woman who accompanied you that long dangerous and fatiguing rout to the Pacific Ocean and back disserved a greater reward for her attention and services on that route than we had in our power to offer her.”