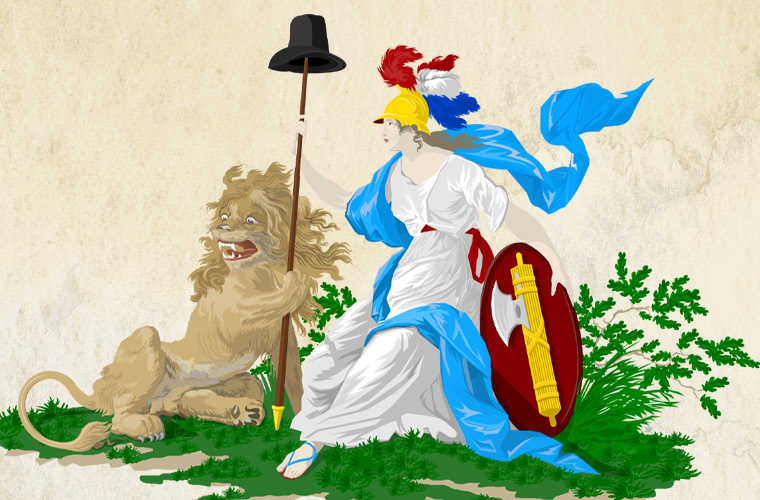 After the French Revolution, the newly founded Republic of France conquered the Netherlands in 1795. The Netherlands became known as the Batavian Republic and the ruler of the Netherlands, Prince William of Orange, had to flee to England. In England, the prince asked the British to prevent France from taking possession of the Dutch colonies. Britain obliged and, as a result, occupied the Cape colony in South Africa. Problems occurred almost immediately because not all the inhabitants of the Cape were in favour of British occupation.

However, the British did bring with them certain improvements. Under British rule, officials received set salaries and were no longer dependent on incomes from fines. This eliminated most malpractices in the government. British iron ploughs were imported, which assisted with agricultural development. Because of the war in Europe, there was a growing demand for agricultural products from the Cape, which furthered economical growth. British taxation was also lenient.

The biggest problem the British had to contend with was the unrest on the eastern frontier. The Burgers (mainly Dutch farmers) and the African Population on the frontier were not prepared to submit to British rule without a fight. When Gaika became chief of the Xhosa nation, unrest and tension on the eastern frontier intensified. The Burgers revolted under the leadership of Adriaan van Jaarsveld and relations between the farmers and authorities deteriorated.

In terms of the Treaty of Amiens signed in 1802 (between England and France), the British returned the Cape Colony to the Netherlands in February 1803. It was then renamed the Batavian Republic. Although they governed for three years only, their enlightened administration of the Cape was a great improvement upon the rule of the Dutch East India Company, which lasted from 1652 to 1795. Commissioner-General J.A. de Mist and the Governor of the Cape of Good Hope, Lieutenant-General J.W. Janssens, sponsored development and reforms.

Central government
Commissioner-General De Mist instituted a strong central government with a balance of power between Governor Janssens and the officials. A political council of four, of whom two had to be colonists, assisted the governor. To prevent possible government misappropriation of funds, financial control was placed in the hands of a Rekenkamer (audit chamber). An independent council of justice administered the law, and an attorney-general was appointed to act as public prosecutor. Appeals were made directly to the Supreme Court at The Hague.

District Administration
Janssens and De Mist got to know the colonists and their circumstances by making several journeys into the outlying areas of the colony. Finding that the districts of Stellenbosch, Swellendam, and Graaff-Reinet were too large, in 1804, they created the new districts of Tulbagh and Uitenhague. A salaried landdrost and six heemraden were chosen from among the burghers to govern the districts, administer the law in minor civil and criminal cases, and regulate local affairs. Field cornets were appointed to help preserve law and order. They were not paid salaries but were exempted from taxes and quitrent.

Church and State
Freedom of religious worship was established. In 1804, by means of the Church Order, the Nederduitsch Gereformeerde Kerk (NGK) remained the State Church, but all religious denominations received equal protection under the law. The NGK was subservient to the state, but it reserved the right to appoint its ministers and to approve church councils. Civil marriages could be contracted before a landdrost and two heemraden.

Education
This was placed in the hands of the state under the control of the ‘Council of Seventeen’. The NG Kerk’s Lutheran churches were represented in this council. Humanism was intended to replace Calvinism as the main driving force in the education of future citizens. Teachers were imported from the Netherlands to raise the standard of education. A grammar school for boys and an intermediate school for girls were started and plans were laid for the establishment of a teachers’ training college.

Trade and agriculture
Colonists were granted greater freedom to trade with the Netherlands. Farming methods were improved by importing an expert from the Rhineland to advise on viticulture. Rice and olives were tried out unsuccessfully and an experimental farm was established near the present town of Darling. A commissioner for stock farming tried to encourage merino wool production.

Finance
Although an effort was made to stabilize the value of the rix dollar, it depreciated by more than 15 per cent.

Race Relations: Attitudes and prejudices
In line with other thinkers of the time, Janssens and De Mist were influenced by the theories and beliefs of the French writer, Jean Jacques Rousseau, who held that men were born free and equal but society corrupted them. In the beginning, these ideas prejudiced Janssens and De Mist against slave-owners and the attitudes of colonials to indigenous peoples, but after their journeys into the interior, they modified their views somewhat. The Batavian rulers were determined to maintain white domination over the Khoi and Xhosa peoples on the frontier. Janssens, therefore, decreed that workers should be given service contracts. He also allocated locations along the Gamtoos River to certain groups and to a mission station at Bethelsdorp. To keep the peace, he tried to apply a policy of separation of whites and blacks along the frontier, but he failed to get the Xhosa to move back across the Fish River. Although treaties were signed with Ngqika (Gaika) and other chieftains that peace should be kept and defined borders respected, the chiefs did not believe that signed papers were in any way binding, so the position on the frontier remained confused.

Slavery
De Mist wanted to free all slaves from birth. He prohibited all further slave imports and aimed to import labour from the Netherlands to develop agriculture in the colony. But his rule was too short for his plans to be put into action.

Evaluation
Although some viewed their liberal humanitarianism with suspicion, the colonists were pleased that Dutch was made the official language, and the reputations of Janssens and De Mist remained high at the Cape. Their reforms instituted tolerance of other creeds, encouraged secular marriages, initiated public education, and gave to the Voortrekkers aspects of government and administration they were to take with them into the hinterland. In 1806, the Cape again came under British rule at a time when the Xhosa nation was expanding, aggressive and self-confident.

In short, the colonial history of the Cape of Good Hope from its first occupation in 1652 is as follows: