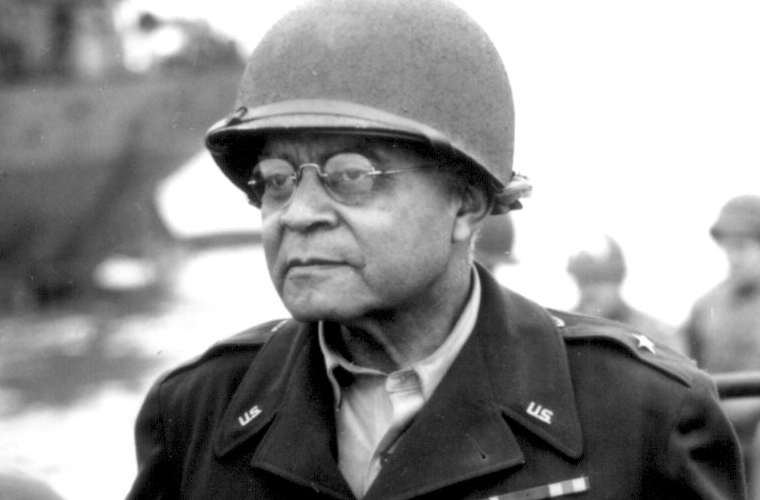 Gen. Benjamin O. Davis, Sr. (1877-1970) was the first African American general in the regular United States Armed Services. He assisted in developing and implementing a plan for the limited desegregation of U.S. combat forces in Europe during World War II. Benjamin O. Davis was born on July 1, 1877, to Henrietta Stewart Davis and Louis P. H. Davis of Washington, D.C. He attended public schools and college in the nation’s capital, ultimately graduating from Howard University.

Davis was commissioned a first lieutenant in the 8th U.S. Volunteer Infantry in 1898, thus beginning a distinguished military career which spanned half a century, four continents, and three major wars. Davis served in Cuba during the Spanish American War. Later he was stationed with the 9th Cavalry, one of two units of “Buffalo Soldiers” on the western frontier. The “Buffalo Soldiers,” as the Indians called the African American regiments, were Indian fighters whose buffalo hide camouflage and reputation as fierce warriors won them their unusual nickname.

Subsequent tours of duty took Davis to the Philippines, Africa, Europe, and various places within the United States. He also taught military science at Tuskegee Institute and Wilberforce University. At retirement in 1948 General Davis was an assistant to the Army inspector general in Washington, D.C. He died November 26, 1970.

On October 25, 1940, Colonel Davis, then commander of the 369th Infantry of New York, was promoted to brigadier general. African Americans were elated over this long overdue appointment inasmuch as Davis, highly respected in the African American community, had been passed over for promotion many times while less senior white colonels had become generals. Although supportive of the Davis appointment, African American leaders contended that President Franklin Delano Roosevelt, whose office made the announcement only days before the general election, used it as a political ploy to regain the support of many disillusioned African American voters who were critical of the administration’s racial policies. An October 16 news release reiterating the War Department’s segregationist policies had angered many African Americans, as had the virtual elimination of African Americans from the officers’ ranks. Indeed, War Department statistics indicate that in 1940 there were only five Black commissioned officers in the regular U.S. Armed Forces. Three were chaplains. The two combat officers were General Davis and his son, Capt. Benjamin O. Davis, Jr. In 1955 the younger Davis became the first African American general in the Air Force.

During World War II Davis, noted for his expertise in race relations, was summoned by the U.S. High Command to Europe where intense racial conflict among American troops had reached epidemic proportions. Davis’s investigation indicated that racial strife was due primarily to discrimination against African American troops by their white countrymen. U.S. commanders not only strictly enforced segregation but also urged Britons, more liberal in their racial attitudes and practices, to do likewise. Davis also found that African American troops deeply resented their exclusion from combat duty.

A shortage of combat troops, as well as political pressure and public demand, persuaded the American High Command in Europe to utilize African Americans in battle, thereby relieving some of the racial tension. Davis, long a proponent of integration of the Armed Forces, assisted in instituting a limited integration of forces in the European Theater. This experiment was successful, according to enlisted personnel, officers, and War Department officials; nevertheless, it did not lead to the full integration of the Armed Forces which Davis and others urged. (Full integration came only after a 1946 presidential directive by Harry S. Truman.