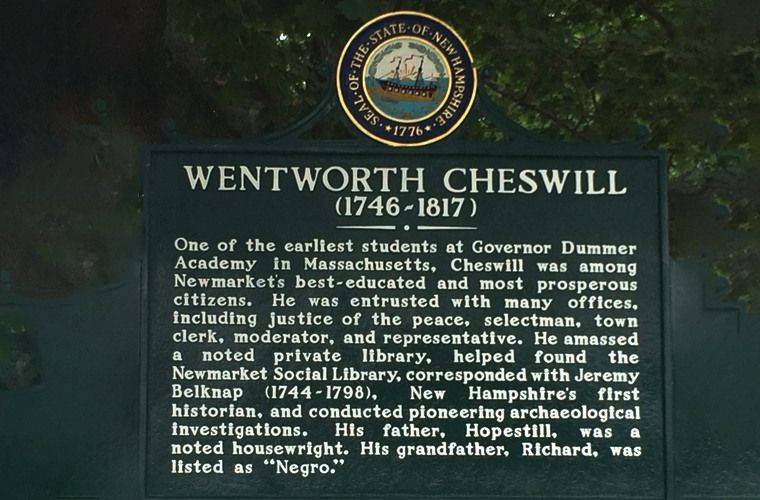 Wentworth Cheswell (11 April 1746 – 8 March 1817) was an African-American teacher, coroner, scrivener, assessor, auditor, moderator, selectman and Justice Of The Peace. He was the only child born to Hopestill and Catherine (Keniston) Cheswell, in Newmarket, New Hampshire. He attended Dummer Academy in Byfield Massachusetts. He was educated by Harvard graduate, William Moody, who taught Latin, Greek, swimming, horsemanship, reading, writing, and arithmetic. Wentworth Cheswell’s education was, in the terms of the day, “an unusual privilege for a country boy of that time.” (Savage).

Cheswell’s grandfather, Richard Cheswell, a black slave in Exeter, New Hampshire, purchased 20 acres of land from the Hilton Grant after he gained his freedom. The deed, dated 18 October 1717, is the earliest known deed in the State of New Hampshire showing land ownership by a black man. The land was located in what was to become the town of Newmarket. His only child, Hopestill (1712-?), became a housewright and built mostly in Portsmouth, New Hampshire. Research has shown he took part in building the John Paul Jones House, which currently houses the Portsmouth Historical Museum. Hopestill was active in local affairs, and he passed his love and knowledge of house wrightmanship, agriculture and community involvement to his son.