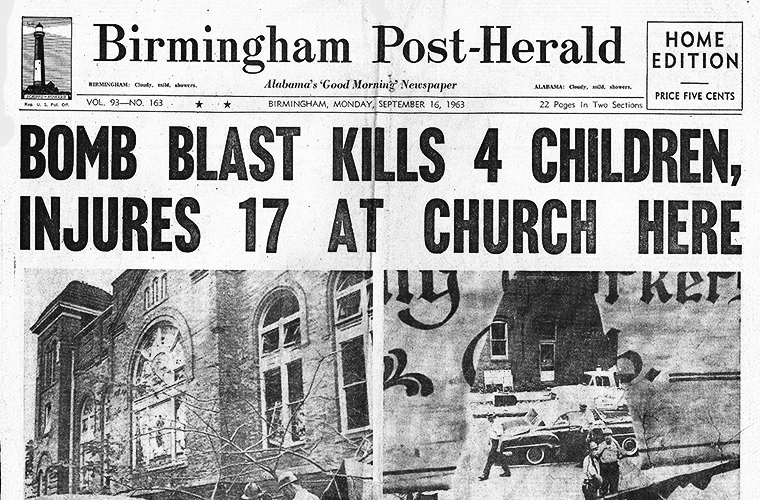 Throughout the civil rights movement, Birmingham was a major site of protests, marches, and sit-ins that were often met with police brutality and violence from white citizens. Homemade bombs planted by white supremacists in homes and churches became so commonplace that the city was sometimes known as “Bombingham.” Local African American churches such as the 16th Street Baptist Church were fundamental in the organization of much of the protest activity. In 1963 the 16th Street Baptist Church hosted several meetings led by civil rights activists. In an effort to intimidate demonstrators, members of the KKK routinely telephoned the church with bomb threats intended to disrupt these meetings as well as regular church services.

When a bomb made of dynamite detonated at 10:22 am on Sept. 15, 1963, church members were attending Sunday school classes before the start of the 11 am church service. The bomb exploded on the east side of the building, where five girls were getting ready for church in a basement restroom. The explosion sprayed mortar and bricks from the front of the building, caved-in walls, and filled the interior with smoke, and horrified parishioners quickly evacuated. Beneath piles of debris in the church basement, the dead bodies of four girls—Addie Mae Collins, Cynthia Wesley, and Carole Robertson, all age 14, and Denise McNair (age 11)—were discovered. A fifth girl who had been with them, Sarah Collins (the younger sister of Addie Mae Collins), lost her right eye in the explosion, and several other people were injured.

Violence broke out across the city in the aftermath of the bombing. Two more young African Americans died, and the National Guard was called in to restore order. The Rev. Martin Luther King, Jr., spoke at the funeral of three of the girls. Despite repeated demands that the perpetrators be brought to justice, the first trial in the case was not held until 1977, when former clan member Robert E. Chambliss was convicted of murder (Chambliss, who continued to maintain his innocence, died in prison in 1985). The case was reopened in 1980, in 1988, and finally again in 1997, when two other former clan members—Thomas Blanton and Bobby Frank Cherry—were brought to trial. Blanton was convicted in 2001 and Cherry in 2002 (Cherry died two years later). A fourth suspect, Herman Frank Cash, died in 1994 before he could be tried.

The bombing of the 16th Street Baptist Church was examined by director Spike Lee in the Oscar-nominated documentary 4 Little Girls (1997). In the film, Lee interviews witnesses to the bombing and family members of the victims while at the same time exploring the backdrop of segregation and white harassment that were central to the time period.