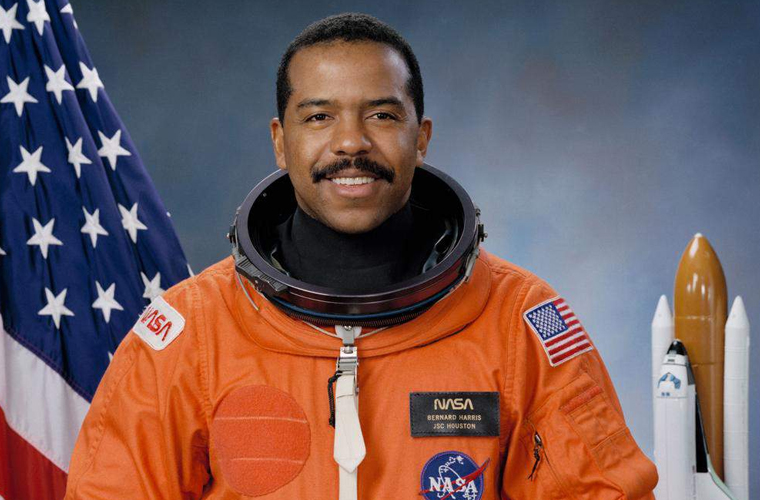 Astronaut, medical scientist, and management executive Bernard A. Harris were born in Temple, Texas on June 26, 1956, to Bernard A. Harris, Sr. and Gussie Emanual Harris. During his youth, Harris lived on the Navajo reservations of Arizona and New Mexico, where his mother found employment as a teacher. At the age of thirteen, Harris watched the first landing on the moon, and he knew that he wanted to become an astronaut. Harris’s family returned to Texas shortly after, and he graduated from Sam Houston High School in San Antonio, Texas in 1974. During high school, Harris decided he wanted to be a medical doctor and so attended the University of Houston, where he earned his B.S. degree in biology in 1978, and the Texas Tech University Health Science Center of Medicine, where he received his M.D. degree in 1982. He then completed his residency in internal medicine at the Mayo Clinic in Rochester, Minnesota.

Never forgetting his aspirations to become an astronaut, Harris followed a career path that would enable him to realize this dream. Upon completing his residency, Harris pursued research opportunities at Ames Research Center in Moffett Field, California, and later the Lyndon B. Johnson Space Center, specifically taking up projects that would appeal to the interests of the astronaut selection committee. After his first application to the NASA Astronaut Corps. was declined, Harris reapplied and was invited to join the elite training group in 1990. Following the completion of intensive training, Harris was given his first assignment as a mission specialist of the Space Shuttle Columbia in the spring of 1993, just a few months after the birth of his daughter, Brooke Alexandria. Two years later, Harris returned to space and made history as the first African American to walk in space, where he and crew member Michael Foale tested the temperature resilience of their spacesuits.

Following his career in astronautics, Harris became an entrepreneur, working first as vice president of Spacehab, Inc. in 1996, where he worked on the commercialization of space exploration. After earning his M.B.A. degree from the University of Houston Clear Lake, Harris became executive director of Versalius Ventures in 2001.

Harris has received much recognition for his work as an astronaut, entrepreneur, and as community developer. In addition to becoming a fellow of the American College of Physicians, he is also the winner of The Challenger Award from the Ronald E. McNair Foundation, and recipient of the prestigious Horatio Alger Award. Dr. Bernard A. Harris Middle School was named in his honor in 2006. That same year Harris established the ExxonMobil Bernard Harris Summer Science Camp and the Dream Tour, two STEM programs to encourage minority students to pursue an interest in the sciences.