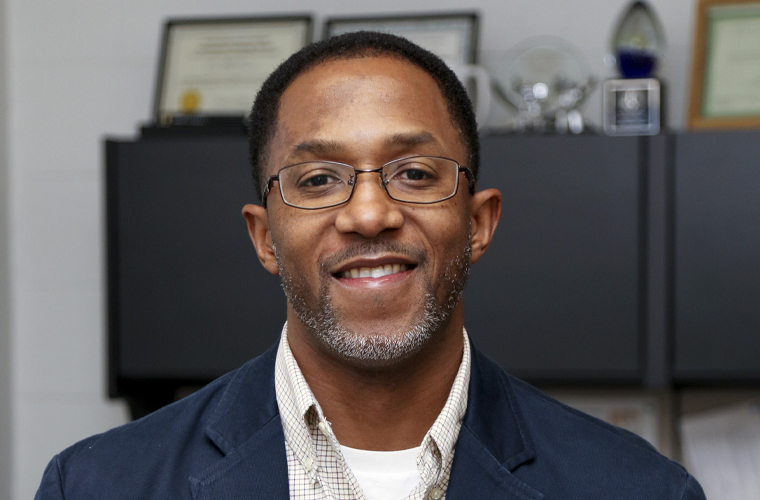 Eric Pierce’s work studying the interaction between water and rocks has taken him from coast to coast, including a stop in Washington, DC, before settling in East Tennessee—all part of what he describes as a lifetime journey of learning.

That journey began with some potholes—the literal kind. In high school, Pierce took up a project to study the development of potholes on roadways in his native New Orleans. It was the experience of exploring soil subsidence, which is caused by water-rock interactions, that later drove his decision to concentrate on environmental science in college, he says.

Pierce—now leader of the Earth Sciences group in the Environmental Sciences Division—is a geochemist by training. He has made a name for himself in environmental remediation, particularly around the cleanup of legacy waste from nuclear research operations.

“Basically I’m looking at water-rock interactions: how contaminants move through the environment and how different minerals dissolve and release certain elements,” Pierce said.

Lately, that work has revolved around the behavior of mercury in the environment. He and his staff are utilizing the advanced microscopy capability at Oak Ridge National Laboratory to identify the presence of mercury-containing minerals and to characterize those particles to better understand how they were created.

Nuclear waste research began with internships
“The work we’re doing now really lends itself to how those particles were formed in the first place. We have greater insight today with our microscopy tools than we have had in the last 30 years,” noted Pierce, who also leads the Subsurface Science and Applied Remediation Science programs at the lab. Another current research area is the weathering of borosilicate glass, commonly used to immobilize high-level radioactive waste.

Pierce began remediation work while an undergrad at Alabama A&M—which he attended on a baseball scholarship and where he earned a B.S. in environmental science with a minor in chemistry.

In the summer following his junior year, Pierce interned at Pacific Northwest National Laboratory (PNNL) and worked on remediation at the nearby Hanford Site, a decommissioned US Department of Energy nuclear materials production facility in Washington state. That’s where Eric said he became fascinated with uranium.

Pierce’s relationship with PNNL continued for the next 14 years. He worked there in the summers while earning his Ph.D. in interdisciplinary environmental sciences from Tulane University, later hired on as a member of the research staff, and eventually advanced to a position as a senior scientist.

A view into the workings of government
He also spent a year on loan to DOE from 2008 to 2009 in an office focused on the restoration of nuclear waste sites. While there he witnessed the transition of the federal government to a new administration. As President Obama came into office that year, Pierce had a front-row seat on confirmations and a new direction at DOE. The assignment “opened my eyes to how DOE works, but more importantly to how the government as a whole function, and the role science plays in that,” Pierce said. “I had the opportunity to observe DOE address questions coming from Congress on budget issues and learned how my research translates into DOE decision-making.”

Soon after, Pierce sought a position that was closer to family in Louisiana. After consulting with colleagues and looking at the facilities and work underway at ORNL, he made a decision to work at Oak Ridge rather than in a university setting.

“The novelty of a national lab in my mind is that you truly have experts in a variety of different areas, and it’s a lunch conversation as to how to figure out an answer to the question you have. We are an incubator for ideas and approaches to addressing really complex challenges. The challenges at a university don’t sit at the same scale,” he added.

“What gets me up every day is the challenge of what I don’t understand well and constantly working at it to understand it. Every day you have the ability to do that here, and that’s what makes the lab special,” Pierce said. “The science we do here is second to none.”

Mentoring as a method to advance science
Mentoring young scientists are also important to Pierce, and not just in terms of helping individuals. “You’re really paying it forward,” Pierce explained. “It’s important to instill a mindset that the science needs to continue and that the paper you just wrote will have an impact down the road that is greater than just a single discovery.” He encourages postdocs to keep in mind the long game, a lesson he also teaches young baseball players.

Pierce has continued to stay involved in baseball. He served as an assistant coach for a high school team while working at PNNL and now oversees his son’s youth baseball team.

“Sports teaches you how to do deal with difficult situations—how to overcome obstacles so that you’re looking forward to the next opportunity without wallowing in the failure you may have just had.”