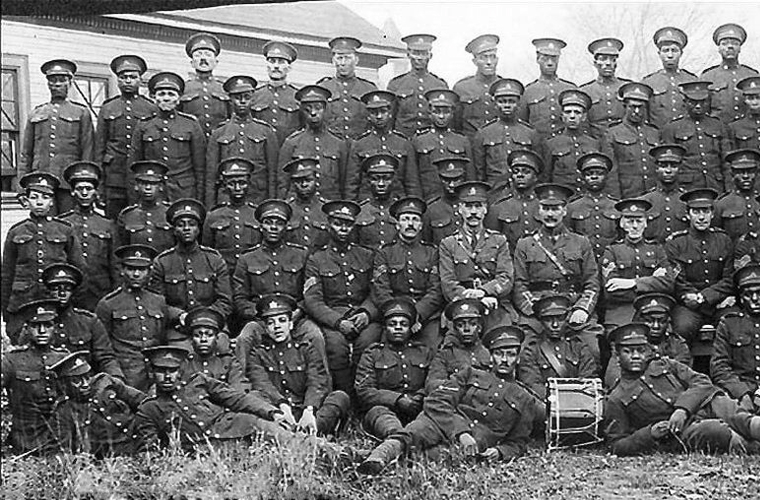 The year was 1914 and while the war was escalating in Europe, a different struggle took root in Canada.

Young black men determined to serve their countrymen who had left jobs and uprooted families in pursuit of a military unit that might accept them – were being rejected by recruiters from Nova Scotia to British Columbia. One commanding officer in New Brunswick turned away 20 healthy black recruits at once because he believed his white soldiers should not “have to mingle with Negroes,” according to a letter he wrote to his superiors in Halifax.

This war, black Canadians were told, had no use for people of their color.

That unofficial policy kept most black Canadians from enlisting for the better part of two years, although some did manage to convince sympathetic commanding officers to allow them into mostly white units. Black leaders and their white supporters were unwilling to accept being shut out en masse, though. After two years of lobbying – fighting to fight – a compromise was cautiously forged. Black Canadians were told they could enlist if they could muster enough men to form their own, segregated battalion, which would be based out of the way in tiny Pictou, a community on Nova Scotia’s North Shore that had no black residents.

Still, the plan was to recruit more than 1,000 men from across the country from Canada and, ultimately, the United States and the British West Indies.

But there was a catch: The battalion’s soldiers would not be given guns. Instead, they would be outfitted with shovels and forestry tools. Instead of fighting alongside Allied forces on the front lines, the Black Battalion – officially the No. 2 Construction Battalion, CEF, and the only segregated battalion formed – would ship out as a non-combat force trained to dig trenches, carry the dead, build prisons and fell trees in France’s Joux forest.

“In France, in the firing line, there is no place for a black battalion,” wrote Major-General W.G. Gwatkin, Chief of the General Staff in Ottawa, who derided black recruits in the same announcement he made to enable their service. Having black soldiers on the front line “would be eyed askance,” he wrote. “It would crowd out a white battalion, and it would be difficult to reinforce.”

Their second-class status was one of many difficult challenges faced by the Black Battalion, whose soldiers suffered some of the most oppressive conditions during the war but received little recognition for their sacrifice and service. They were not honored as heroes when they returned to Halifax in 1919 nor when the battalion was officially disbanded in 1920. Their story went largely unacknowledged until 1986 when Senator Calvin Ruck published his book, The Black Battalion: Canada’s Best Kept Military Secret. The thin volume was the culmination of years of painstaking research. Even Mr. Ruck, who was born in Sydney, N.S., had never heard tell of the No. 2 Construction Battalion.

Formed in July 1916, the unit recruited just more than 600 men, including about 300 from Nova Scotia, 350 from Ontario and a collection of Western Canadian, American and international recruits. Their first assignment was to dig up rail lines across New Brunswick. They eventually left from Halifax in March 1917, on the troopship Southland. They landed in England and dug trenches for troops training there and repaired roads; within months, they were attached to the Canadian Forestry Corps and sent to France for logging and milling work, to carry out road repairs and to haul supplies.

“They were viewed as being mentally and physically inferior. They joined in obscurity. They trained in obscurity. They fought and served in obscurity,” said Douglas Ruck, a Halifax-based lawyer, and Senator Ruck’s son. He recalls the family dining table being blanketed for years with the archival records his father had collected to piece together the Black Battalion’s story.

It is as much about their absence from most Canadian history books as it is about their role in the war. Although her father, Joseph Parris, served in the No. 2, Sylvia Parris grew up with no knowledge of the battalion. She learned much of the story after Mr. Ruck published his book and says it has helped her understand why her father and the rest of the battalion rarely told their stories, which were neither heroic nor prideful.

“They went to the war in the face of systemic and individual racism. They went because their country, however, they came to it, was their country, too. They had families to protect,” she said, adding: “They came back to those same systemic issues. And they kept to themselves as a means of survival.”

Russell Grosse, executive director of the Black Cultural Centre for Nova Scotia, said few stayed in touch after the war despite the fact many lived near each other. In 1982, when Mr. Ruck and the BBC held a ceremony in Halifax to honor nine remaining veterans of the battalion, the men were practically strangers. But the recognition they received that night, Mr. Grosse said, showed the veterans and their families that they deserved a legacy.

“They were so abused and misused along the way. Every day was a struggle for them just to be a part of the organization,” said George Borden, a historian who grew up with several Black Battalion veterans in his Nova Scotia community. “They were the last to get supplied. They were the last to get paid. These were young men, but they were men,” he said. “It completely destroyed their self-pride.”

Official recognition of their service came in 1993, when Pictou’s Market Wharf, the site of the battalion’s first headquarters, was declared a national historic site.

Now, the job for the dwindling number of people who know the battalion’s story is to get it into history books and ensure their legacy does not disappear.