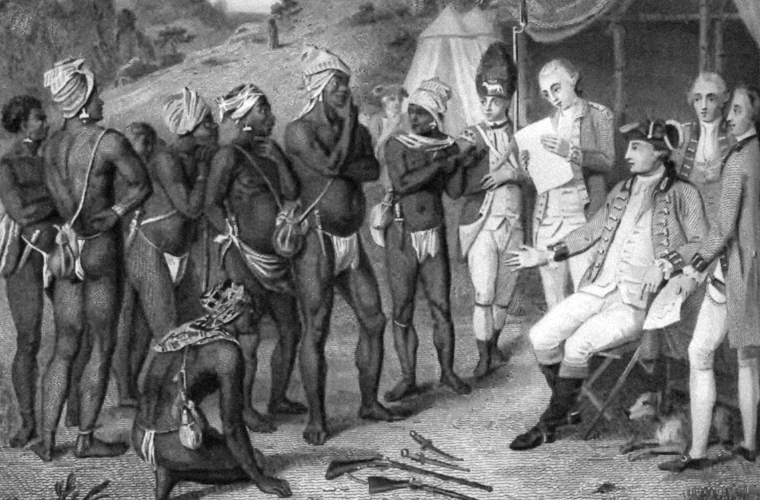 During the eighteenth century, the Maroons of Jamaica evolved into formidable opponents for the English planters who occupied the island during that period. The original Maroons were the descendants of a band of runaway Spanish slaves who had taken refuge in the mountainous interior of the island. Later, runaways also supplied much of their numbers. In the mountains, they together sought freedom, created villages and a new way of life. They divided themselves into two groups, the Windward and Leeward Maroons. The Windward Maroons were situated in the eastern section of the island, and the Leeward in the western section of the island. Both locations were far away from the oppressive and tyrannical sugar plantations that the English had established in the island’s coastal regions. However, despite the considerable distance between the maroons and the planters, the two groups came into repeated confrontations, which ultimately resulted in the First and Second Maroon Wars.

In Richard Dunn’s Sugar and Slavery, the author argues that the causes of the Maroon wars were directly related to the numerous insurrections that plagued the island during the years of 1694 to 1704, and the number of slaves that ran away to join the Maroons. Small revolts had broken out on Jamaica’s north coast in 1694,1702, and 1704. Runaways fleeing from the repression that followed these revolts then attempted to hide with other ex-slaves in the mountains. This activity set the stage for the Maroon Wars of 1720 to 1739. (261). Dunn argues that these revolts were the cause of the war. Yet other factors also contributed, especially the unwarranted aggression of the planters towards the Maroons.

Bryan Edwards, a very prominent speaker for the planters during the eighteenth century, and the author of Maroon Negroes revealed (both wittingly and unwittingly) some of the other factors that led to war between the Planters and the Maroons. Edward argues that the primary cause of the first Maroon war was that the white Planters and the members of the militia were becoming more aggressive towards the Maroons. These altercations became more and more violent: “Scare a week [passed] without their murdering one or more of them; and as soldiers became more confident and careless, the Negroes grew more enterprising and bloody-mined.”

But Edwards, himself a planter, also reveals white planters’ outrage at the fact that the Maroons remained free. Slave owners feared that the Maroons represented a symbol of hope for the slaves who were still in captivity. The maroon villages were a place of refuge for the runaway slaves. Edwards says, “From time to time, without the least provocation; and by their barbarities and outrages [the Maroons] intimidated the whites from venturing to any considerable distance from the sea coast”(123). The island was the whites’, and slavery the Africans’ proper state—or so thought the planters. And planters even feared that the Maroons’ independence undermined the property value of their own land. Edwards also makes mention of the fact that the English were offended when the Maroons inadvertently refused the proclamation offered by Lieutenant- Governor. Sir Charles Lyttelton. This resulted in yet still further aggression by the English, who sent a white militia into the interior to subdue the Maroons. The Maroons, in turn, unleashed their vengeance upon the white planters, raiding plantations at night, and killing whites regardless of their age or sex.

Even after the first Maroon War ended in the famous treaty between their leader Cudjoe and the colonial government of Jamaica, the conflict between the two warring parties continued. The size of the Maroons grew considerably after 1740, and they soon wanted more land to sustain their growing population. And, according to eighteenth-century author R.C Dallas, by the late 1700s the Maroon men had become increasingly friendly with the slave women and in numerous cases fathered children with slave women. “He who connected himself,” Dallas claimed, “with a woman whose brother, sister, or other relations, were fugitives, would probably be tempted to remit his pursuit of them, and even favor their concealment.”(125) What this meant was that when relatives of these Maroon children ran away from the plantations, the Maroons were more than eager to help these new runaways. This greatly angered the planters, who used the new situation as an excuse to break the terms and conditions of the peace treaty of 1738.

Other tensions increased conflict between the planters and the Maroons in the eighteenth century. In one outstanding incident, a group of Maroons came in dispute with a band of surveyors. According to Dallas, “Some surveyors being employed to mark lines of the adjoining patents, or grants of Crown lands, for the purpose of determining the boundaries of their 1500 acres conceded by treaty to them, they took alarm, supposing an encroachment to be made on their territory, and they threatened the surveyors”(128) This was just a simple misunderstanding between the two parties involved. The result was, however, more complex. The Maroons, thinking that they had been wronged, sought justice through their Superintendent. They resided in a white town until the matter was settled.

By the eighteenth century, the Maroons viewed the planters as a clear and present danger to their autonomous way of life. The planters viewed the Maroons as an unruly, rebellious group that threatens their lavish and luxurious way of life that had grown accustomed too. The planters formed an elite group who had the power of making laws, and who had much to lose. Their fear of losing power was evident when they signed the 1738 peace treaty with Cudjo. The tension that divided the two parties was also apparent. All that was needed was a misunderstanding to occur to ignite, the outbreak of violence between the Planters and the Maroons. By the end of the eighteenth century, such misunderstandings were not wanting, and the result was the second Maroon War of Jamaica.