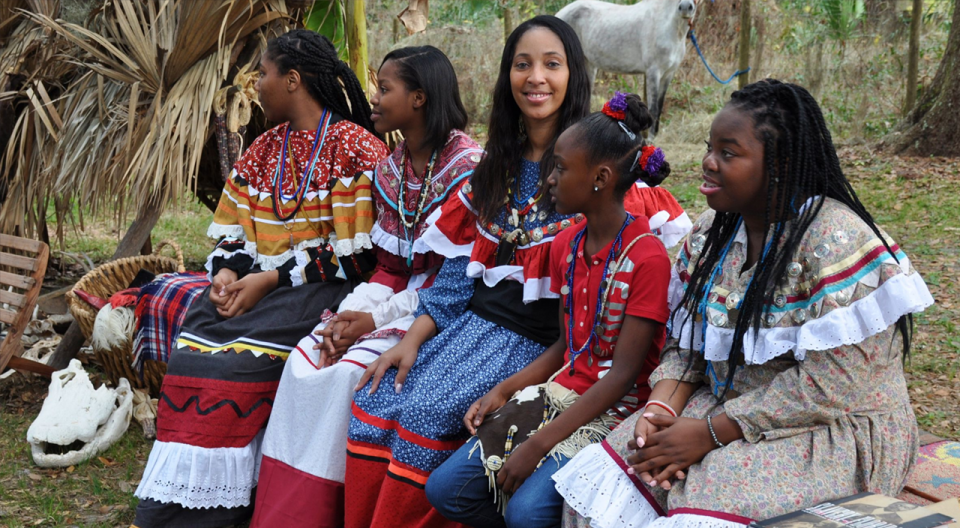 The Black Seminoles are a small offshoot of the Gullah who escaped from the rice plantations in South Carolina and Georgia. They built their own settlements on the Florida frontier, fought a series of wars to preserve their freedom, and were scattered across North America. They have played a significant role in American history, but have never received the recognition they deserve.

Some Gullah slaves managed to escape from coastal South Carolina and Georgia south into the Florida peninsula. In the 18th century, Florida was a vast tropical wilderness, covered with jungles and malaria-ridden swamps. The Spanish claimed Florida, but they used it only as a buffer between the British Colonies and their own settled territories farther south. They wanted to keep Florida as a dangerous wilderness frontier, so they offered refuge to escaped slaves and renegade Indians from neighboring South Carolina and Georgia. The Gullahs were establishing their own free settlements in the Florida wilderness by at least the late 1700s. They built separate villages of thatched-roof houses surrounded by fields of corn and swamp rice, and they maintained friendly relations with the mixed population of refugee Indians. In time, the two groups came to view themselves as parts of the same loosely organized tribe, in which blacks held important positions of leadership.

The Gullahs adopted Indian clothing, while the Indians acquired a taste for rice and an appreciation for Gullah music and folklore. But the Gullahs were physically more suited to the tropical climate and possessed an indispensable knowledge of tropical agriculture; and, without their assistance, the Indians would not have been able to cope effectively with the Florida environment. The two groups led an independent life in the wilderness of northern Florida, rearing several generations of children in freedom—and they recognized the American settlers and slave owners as their common enemy. The Americans called the Florida Indians “Seminoles,” from the Spanish word cimarron, meaning “wild” or “untamed”; and they called the runaway Gullahs “Seminole Negroes” or “Indian Negroes.”

Modern historians have called these free Gullah frontiersmen the “Black Seminoles.” The Seminole settlements in Spanish Florida increased as more and more runaway slaves and renegade Indians escaped south—and conflict with the Americans was, sooner or later, inevitable. There were skirmishes in 1812 and 1816. In 1818, General Andrew Jackson led an American army into Florida to claim it for the United States, and war finally erupted. The blacks and Indians fought side-by-side in a desperate struggle to stop the American advance, but they were defeated and driven south into the more remote wilderness of central and southern Florida. General Jackson (later President) referred to this First Seminole War as an “Indian and Negro War.” In 1835, the Second Seminole War broke out, and this full-scale guerrilla war would last for six years and claim the lives of 1,500 American soldiers. The Black Seminoles waged the fiercest resistance, as they feared that capture or surrender meant death or return to slavery—and they were more adept at living and fighting in the jungles than their Indian comrades.

The American commander, General Jesup, informed the War Department that, “This, you may be assured, is a negro and not an Indian war”; and a U.S. Congressman of the period commented that these black fighters were “contending against the whole military power of the United States.” When the Army finally captured the Black Seminoles, officers refused to return them to slavery—fearing that these seasoned warriors, accustomed to their freedom, would wreak havoc on the Southern plantations. In 1842, the Army forcibly removed them, along with their Indian comrades, to Indian Territory (now Oklahoma) in the unsettled West.

The Black Seminoles, exiled from their Florida strongholds, were forced to continue their struggle for freedom on the Western frontier. In Oklahoma, the Government put them under the authority of the Creek Indians, slave owners who tried to curb their freedom; and white slave traders came at night to kidnap their women and children. In 1850, a group of Black Seminoles and Seminole Indians escaped south across Texas to the desert badlands of northern Mexico.

They established a free settlement and, as in Florida, began to attract runaway slaves from across the border. In 1855, a heavily armed band of Texas Rangers rode into Mexico to destroy the Seminole settlement, but the blacks and Indians stopped them and forced them back into the U.S. The Indians soon returned to Oklahoma, but the Black Seminoles remained in Mexico, fighting constantly to protect their settlement from the marauding Comanche and Apache Indians. In 1870, after the emancipation of the slaves in the United States, the U.S. Cavalry in southern Texas invited some of the Black Seminoles to return and join the Army—and it officially established the “Seminole Negro Indian Scouts.” In 1875, three of the Scouts won the Congressional Medal of Honor—America’s highest military decoration—in a single engagement with the Comanche Indians on the Pecos River. The Black Seminoles had fled the rice plantations, built their own free settlements in the Florida wilderness, and then fought almost continuously for fifty years to preserve their freedom. It is little wonder they should provide some of the finest soldiers in the U.S. Cavalry.

Today, there are still small Black Seminole communities scattered by war across North America and the West Indies. The “Black Indians” live on Andros Island in the Bahamas where their ancestors escaped from Florida after the First Seminole War. The “Seminole Freedmen,” the largest group, live in rural Seminole County, Oklahoma where they are still official members of the Seminole Indian Nation. The “Mascogos” dwell in the dusty desert town of Nacimiento in the State of Coahuila in Northern Mexico. And, finally, the “Scouts” live in Brackettville, Texas outside the walls of the old fort where their grandfathers served in the U.S. Cavalry. These groups have lost almost all contact with one another, but they have all retained the memory of their ancestors’ gallant fight for freedom in the Florida wilderness.

In 1978, Dr. Ian Hancock discovered that elders among the Texas Scouts still speak a dialect of Gullah—140 years after their ancestors were exiled from Florida and as much as 200 years after their early ancestors escaped from rice plantations in South Carolina and Georgia! In 1980, this writer found that elderly people among the Oklahoma Seminole Freedmen also speak Gullah, while many younger people remember words and phrases once used by their grandparents. Both the Oklahoma and Texas groups, though deeply conscious of their Florida heritage, were unaware of their connection with the Gullah in South Carolina and Georgia.

They did not know precisely where their slave ancestors had come from before fleeing into the Florida wilderness. The Oklahoma Seminole Freedmen still possess a rich traditional culture combining both African and American Indian elements. They continue to eat rice as a characteristic part of their diet, sometimes applying a sauce of okra or spinach leaves—like the Gullah, and like their distant relatives in West Africa.