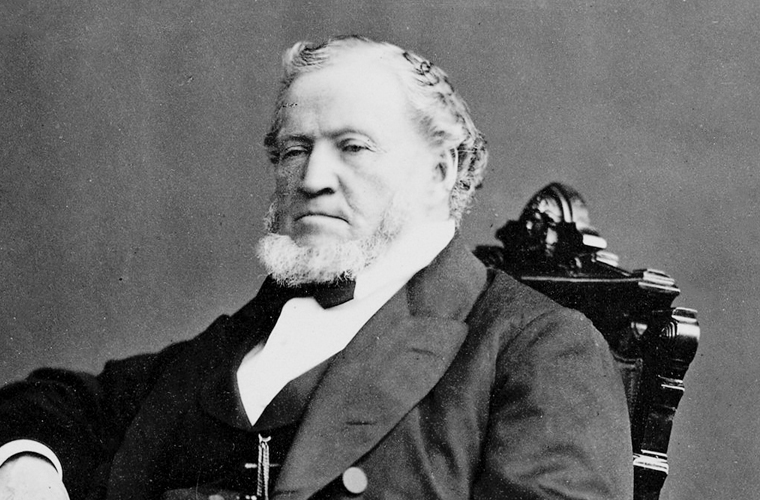 Speech by Governor Brigham Young in Joint Session of the Legislature Giving Counsel on a Bill in Relation to African Slavery Salt Lake City, Friday, 23 January 1852

I am firm in the belief that Africans ought to dwell in servitude… When a master has a Negro, and uses him well, the slave is much better off than if he was free. Good wholesome servitude, I know there Is nothing better than that.’

I have this section in my hand, headed “An Act in Relation to African Slavery.” I have read it over and made a few alterations. I will remark with regard to slavery, inasmuch as we believe in the Bible, inasmuch as we believe in the ordinances of God, in the Priesthood and order and decrees of God, we must believe in slavery. This colored race has been subjected to severe curses, which they have in their families and their classes and in their various capacities brought upon themselves. And until the curse is removed by Him who placed it upon them, they must suffer under its consequences; I am not authorized to remove it. I am a firm believer in slavery.

Now to the case before us with regard to slavery, with regard to slaves that are Africans, or that are English, or that are Dutch, or ourselves—I go in for making just such laws as we want upon that matter, independent of any other nation under the heavens; let us do that [which will bring about what] we want to be done regardless of the abuses of despotic governments. Whether they deem it to be right or wrong is no matter to me, but to do the thing we ought to do, to secure those blessings we are in pursuit of, ought to be the first and most weighty consideration with us; that is my mind upon this matter. This case comes up and causes feelings of not a pleasing character in the minds of some.

The African enjoys the right of receiving the first principles of the Gospel; this liberty is held out to all these servants. They enjoy the liberty of being baptized for the remission of sins and of receiving the Holy Ghost by the laying on of hands; they enjoy the privilege of living humbly before the Lord their great Master, so as to enjoy the spirit of the Lord continually. In short, as far as the common comforts of life, salvation, light, truth, enjoyment, and understanding are concerned, the Black African has precisely the same privilege as the white man. But they cannot share in the Priesthood; they cannot bear rule; they cannot bear rule in any place until the curse is removed from them; they are a “servant of servants.” We are servants, as Counselor George Smith has stated; he says he is a slave; he has been driven from his home and his rights—we are all servants.

Now suppose that we should have a servant, and he should be a Negro; it is all right; it is perfectly reasonable and strictly according to the Holy Priesthood. I loathe the abuses to which the slave in a great many instances is exposed, although as a general thing that part of the Negro race that are in servile bondage, are much more comfortable and better provided for than the lower classes of the nations of Europe.

Though the enlightened nation, England, has abolished slavery in her colonies, yet the most damnable slavery exists at the very heart of the nation. I am bold to say that you cannot find a Black man or woman in the United States that has traveled through the period of his life in hunger in the midst of plenty. Yet there are millions upon millions in the cities of Europe who have lived amidst the choicest luxuries of life and died at last in starvation; thousands died of starvation in England the year that I was in that country. That is meaner slavery than to set them to work in growing cotton and sugar, etc. I would not wish to go to the enlightened nation of England to know what slavery is because they are so far sunken in iniquity and so deeply degraded.
People contend about it to know what it is; we know it exists, and such a thing shall and will exist until the Lord God shall remove it; until then it will and ought to exist.

There are many brethren in the South, a great amount of whose means is vested in slaves. Those servants want to come here with their masters; when they come here, the Devil is raised. This one is talking, and that one is wondering. A strong abolitionist feeling has power over them, and they commence to whisper round their views upon the subject, saying, “Do you think it’s right? I am afraid it is not right.” I know it is right, and there should be a law made to have the slaves serve their masters because they are not capable of ruling themselves.

When the Lord God cursed old Cain, He said, “Until the last drop of Abel’s blood receives the Priesthood, and enjoys the blessings of the same, Cain shall bear the curse;” then Cain is calculated to have his share next and not until then; consequently, I am firm in the belief that they ought to dwell in servitude.

The caption of this bill I don’t like, I have therefore taken the liberty to alter it. I have said, “An Act in Relation to Manual Service,” instead of “African Slavery.” I have also altered the latter part of it. I am willing the bill should be thrown back to be remodeled.

I would like masters to behave well to their servants, and to see that every person in this territory is well used. When a master has a Negro and uses him well, he is much better off than if he was free. As for masters knocking them down and whipping them and breaking the limbs of their servants, I have as little opinion of that as any person can have; but good wholesome servitude, I know there is nothing better than that.

Suppose I am in England and bring over 100 persons, males, and females, and they pledge themselves to pay me in labor, but as soon as they arrive here they refuse to abide by their contract and turn around and abuse their benefactors. See the abuse that Dan Jones has received, who prevailed upon Sister Lewis to spend almost every dime she possessed to help individuals to this place; they curse both her and him and this they will continue to do, waxing worse and worse until they go down to hell (I say they ought to be her servants). Many more such cases could be brought to bear. There should be a law to govern this, that those who have made contracts to labor, may perform their labors according to said contracts.