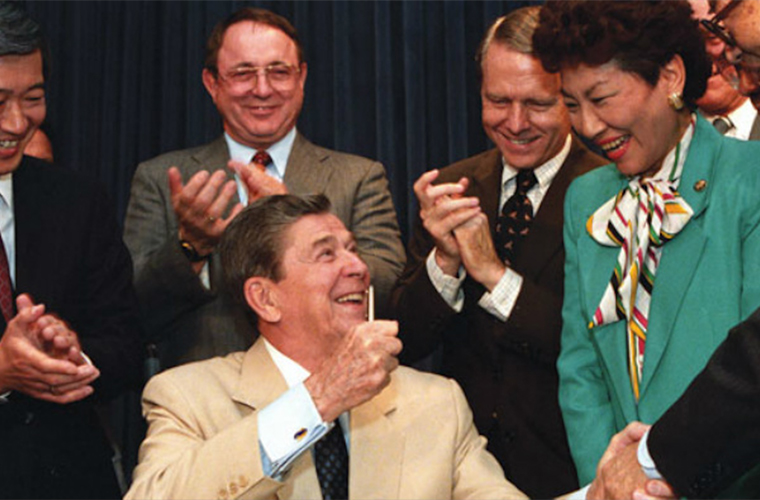 Enacted by the United States Congress
August 10, 1988
“The Congress recognizes that, as described in the Commission on Wartime Relocation and Internment of Civilians, a grave injustice was done to both citizens and permanent residents of Japanese ancestry by the evacuation, relocation, and internment of civilians during World War II.

As the Commission documents, these actions were carried out without adequate security reasons and without any acts of espionage or sabotage documented by the Commission and were motivated largely by racial prejudice, wartime hysteria, and a failure of political leadership.

The excluded individuals of Japanese ancestry suffered enormous damages, both material and intangible, and there were incalculable losses in education and job training, all of which resulted in significant human suffering for which appropriate compensation has not been made.

For these fundamental violations of the basic civil liberties and constitutional rights of these individuals of Japanese ancestry, the Congress apologizes on behalf of the Nation.”

Based on the findings of the Commission on Wartime Relocation and Internment of Civilians (CWRIC), the purposes of the Civil Liberties Act of 1988 with respect to persons of Japanese ancestry included the following:

1) To acknowledge the fundamental injustice of the evacuation, relocation, and internment of citizens and permanent resident aliens of Japanese ancestry during World War II;

2) To apologize on behalf of the people of the United States for the evacuation, internment, and relocations of such citizens and permanent residing aliens;

3) To provide for a public education fund to finance efforts to inform the public about the internment so as to prevent the recurrence of any similar event;

4) To make restitution to those individuals of Japanese ancestry who were interned;

5) To make more credible and sincere any declaration of concern by the United States over violations of human rights committed by other nations.