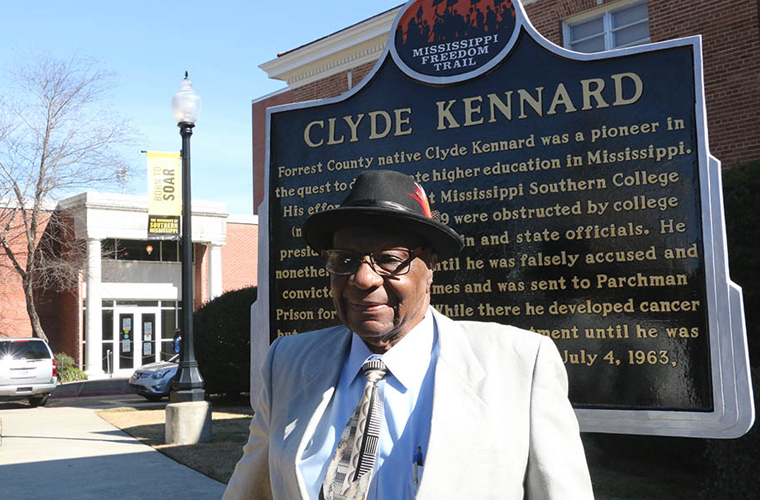 Clyde Kennard was an African American activist who pioneered the desegregation of higher education in Mississippi. After applying multiple times to Mississippi Southern College (now the University of Southern Mississippi), he was framed and incarcerated in 1960 until his death in 1963.

Born on June 21, 1927, in Hattiesburg, Mississippi, Kennard moved to Chicago, Illinois at age 12 to attend school. In 1945 Kennard joined the military and served for 7 years until 1952 when he received an honorable discharge after serving in Germany and Korea.

In 1955, Kennard left the University of Chicago where he was studying political science and moved to Eatonville, Mississippi to be with his mother on the 20-acre farm he had made the down payment on for her after returning from the military. While living in Mississippi, Kennard decided to further his education. There were no black colleges nearby so Kennard decided to attempt to enroll in Mississippi Southern College in 1955, despite it being an all-white college.

The admissions department denied his application in 1955 because of state segregation laws but they cited the fact that he had not included recommendations from five Mississippi Southern alumni. Kennard continued to attempt to enroll at the college to the point wherein 1959 Mississippi Governor James P. Coleman met personally with him to convince him to desist from applying to Mississippi Southern.

Kennard did not give up and reapplied in August of 1959, threatening to take up the derailment of his application in federal court. He was again rejected on a technicality and soon after he was arrested for “driving with excessive speed” and “illegal possession of whiskey” by police. These claims were false and were meant to keep Kennard from continuing to apply to the university.

Kennard appealed these convictions all the way to the Mississippi Supreme Court to no avail and the convictions were upheld. Further framed for stealing $25 worth of chicken feed, he was sentenced after a 10-minute trial by an all-white jury to seven years at Parchman Farm, the state penitentiary. Kennard underwent brutal treatment on Parchman Farm until he was diagnosed with critical colon cancer and he was let out on medical leave before he died on July 4, 1963.

Kennard, who never married or had children, never saw justice while he lived. In 1991, however, his case was reopened after evidence surfaced that he had been framed. The legal campaign to overturn his convictions lasted until 2006, when Johnny Lee Roberts, the man who had actually stolen the $25 of chicken feed, admitted that the arrest of Kennard had nothing to do with the theft and everything to do with Kennard’s attempts to enroll in Mississippi Southern College.

Clyde Kennard was finally recognized for his bravery in 2006 when Haley Barbour, then governor of Mississippi, exonerated him for his crimes.