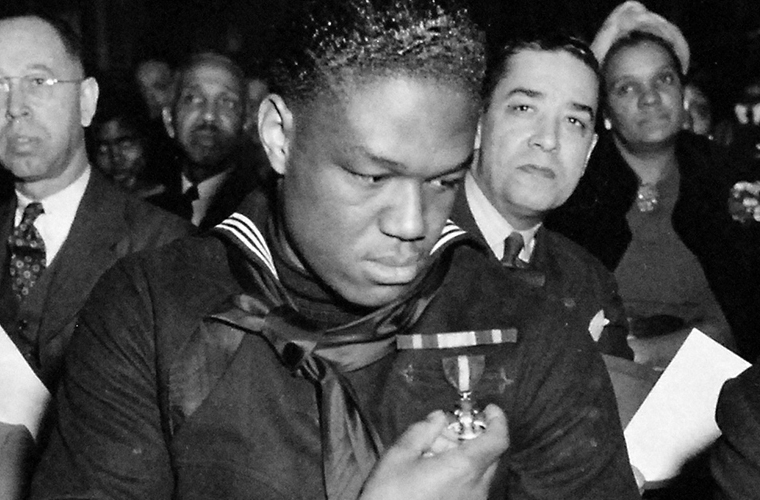 Miller worked on his family’s farm and played football in high school before he enlisted in the U.S. Navy in 1939, having both a desire to travel and a need to support his family. He accepted a position as a ship’s mess attendant. He rose steadily in rank to ship’s cook, third class, and was stationed at Pearl Harbor in Hawaii.

When the Japanese attacked Pearl Harbor on December 7, 1941, Miller was doing laundry below decks on the USS West Virginia. When the alarm called the ship’s crew to battle stations, Miller headed a gun magazine amidships. A torpedo had damaged the magazine, so the physically strong Miller began carrying the wounded to safety. Among those he attended to was the ship’s commander, Capt. Mervyn Bennion, who was mortally wounded. Miller then manned a .50-calibre antiaircraft gun, for which he had no training, and continued firing on the enemy until he ran out of ammunition and received the order to abandon ship.

Miller’s actions during the attack earned him a commendation from Secretary of the Navy Frank Knox and the Navy Cross, which was presented to him personally by Chester Nimitz, commander of the U.S. Pacific Fleet, on May 27, 1942. Miller died in 1943 when a torpedo sank his ship, the escort carrier Liscome Bay, off Butaritari Atoll in the Gilbert Islands. On June 30, 1973, the navy commissioned a frigate, the USS Miller, in his honor.