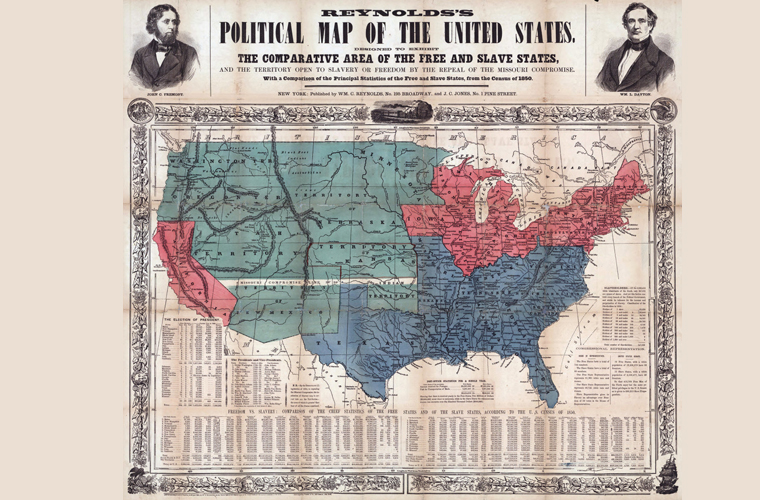 Missouri Compromise, (1820), in U.S. history, measure worked out between the North and the South and passed by the U.S. Congress that allowed for the admission of Missouri as the 24th state (1821). It marked the beginning of the prolonged sectional conflict over the extension of slavery that led to the American Civil War.

The territory of Missouri first applied for statehood in 1817, and by early 1819 Congress was considering enabling legislation that would authorize Missouri to frame a state constitution. When Rep. James Tallmadge of New York attempted to add an antislavery amendment to that legislation on February 13, 1819, however, there ensued an ugly and rancorous debate over slavery and the government’s right to restrict slavery. The Tallmadge amendment prohibited the further introduction of slaves into Missouri and provided for the emancipation of those already there when they reached age 25. The amendment passed the House of Representatives, controlled by the more-populous North, but failed in the Senate, which was equally divided between free and slave states. Congress adjourned without resolving the Missouri question.

The following summer a considerable body of public opinion in the North was rallied in support of the Tallmadge proposal. Much of that anti-Missouri sentiment, as it was called, arose from a genuine conviction that slavery was morally wrong. Political expediency was mixed with moral convictions. Many of the leading anti-Missouri men had been active in the Federalist party, which seemed to be in the process of disintegration; it was charged that they were seeking an issue on which to rebuild their party. The Federalist leadership of the anti-Missouri group caused some northern Democrats to reconsider their support of the Tallmadge amendment and to favor a compromise that would thwart efforts to revive the Federalist party.

When it reconvened in December 1819, Congress was faced with a request for statehood from Maine. The Senate passed a bill allowing Maine to enter the Union as a free state and Missouri to be admitted without restrictions on slavery. Sen. Jesse B. Thomas of Illinois then added an amendment that allowed Missouri to become a slave state but banned slavery in the rest of the Louisiana Purchase north of latitude 36°30′. Henry Clay then skillfully led the forces of compromise, engineering separate votes on the controversial measures. On March 3, 1820, the decisive votes in the House admitted Maine as a free state, Missouri as a slave state, and made free soil all western territories north of Missouri’s southern border.

When the Missouri constitutional convention empowered the state legislature to exclude free blacks and mulattoes, however, a new crisis was brought on. Enough northern congressmen objected to the racial provision that Clay was called upon to formulate the Second Missouri Compromise. On March 2, 1821, Congress stipulated that Missouri could not gain admission to the Union until it agreed that the exclusionary clause would never be interpreted in such a way as to abridge the privileges and immunities of U.S. citizens. Missouri so agreed and became the 24th state on August 10, 1821; Maine had been admitted the previous year on March 15.

Although slavery had been a divisive issue in the United States for decades, never before had sectional antagonism been so overt and threatening as it was in the Missouri crisis. Thomas Jefferson described the fear it evoked as “like a fire bell in the night.” Although the compromise measures appeared to settle the slavery-extension issue, John Quincy Adams noted in his diary, “Take it for granted that the present is a mere preamble—a title page to a great, tragic volume.” The sectional conflict would grow to the point of civil war after the Missouri Compromise was repealed by the Kansas-Nebraska Act (1854) and was declared unconstitutional in the Dred Scott decision of 1857. 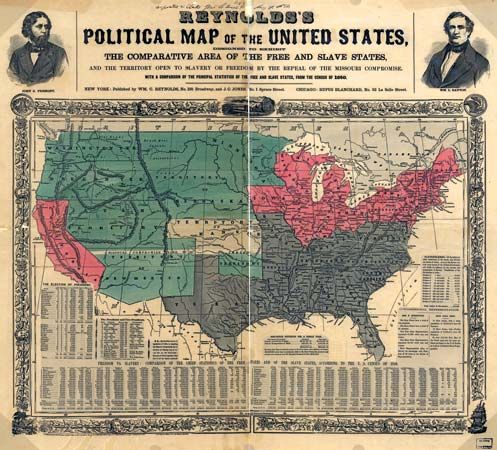 Map of the United States that denotes free and slave states as well as the territory open to slavery or freedom by the repeal of the Missouri Compromise, c. 1856.