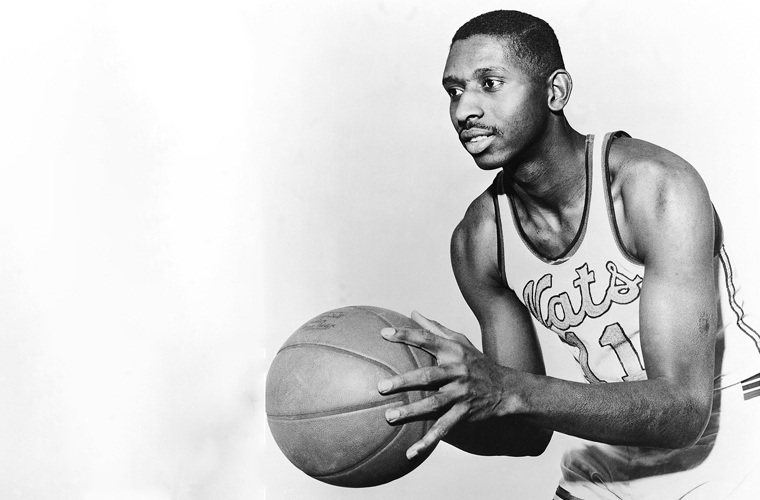 Earl Francis “Big Cat” Lloyd, the first African American to play in a National Basketball Association game, was born on April 3, 1928, in Alexandria, Virginia. Lloyd was raised by his father, Theodore Benjamin Lloyd, and his mother, Daisy Mitchell Lloyd, in the Berg area of Alexandria. Lloyd’s mother’s wisdom influenced him to become a good student and an outstanding athlete at Lyles-Crouch Elementary School and Parker-Gray High School. His coach, Louis Randolph Johnson, helped Lloyd to enroll at West Virginia State University (WVSU) after his 1946 high school graduation. The speedy defensive-minded Lloyd, at 6’7” tall, led WVSU to two CIAA Conference and Tournament Championships in 1948 and 1949. Lloyd was named All-Conference three times and was All-American twice, as highlighted by the Pittsburgh Courier in 1949 and 1950. Lloyd graduated from WVSU with his B.S. degree in physical education in 1950.

In 1950, Lloyd was among the first three black players drafted by an NBA team when he was signed by the Washington Capitols and became the first black to play in an NBA game on October 31, 1950, as part of Washington coach Horace “Bones” McKinney’s starting five. Drafted by the U.S. Army in 1951, Lloyd captured four U.S. Army basketball titles. Returning to the NBA in 1952, Lloyd and teammate Jim Tucker became the first African American to win an NBA title in 1955 with Dolph Schayes and the Syracuse Nationals. That year, Lloyd averaged 10.2 points and 7.7 rebounds for Syracuse, beating the Fort Wayne Pistons four games to three in a seven-game series for the NBA title. Lloyd closed out his playing career with the Detroit Pistons from 1958 to 1960. Over his professional career, Lloyd played in over 560 games in nine seasons and averaged 8.4 points and 6.4 rebounds per game.

In 1960, Lloyd served as assistant coach and scout for the Detroit Pistons. As a scout, he helped draft Bailey Howell but failed to interest Detroit in future legends Earl “the Pearl” Monroe and Willis Reed. Lloyd served as the NBA’s first non-playing coach with the Pistons from 1971 to 1973. After basketball, he worked for Chrysler and as a job-placement administrator with the Detroit Public Schools. Further recognition of Lloyd began when his name appeared as the answer to a question on television’s Jeopardy quiz show in 1988. In the 1990s, Lloyd worked for the steel and auto parts company of former Pistons, Dave Bing, who had played for Lloyd during his years at the helm of the Pistons.

Lloyd and his wife, Charlita, had three sons and four grandchildren. Lloyd resided in Fairfield Glade, Tennessee, just outside Crossville, Tennessee, until his death on February 26, 2015