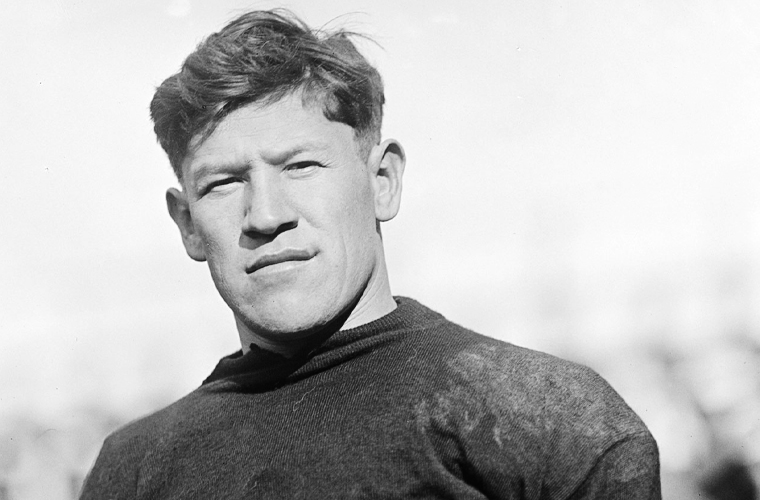 This is Jim Thorpe (May 22 or 28, 1887 – March 28, 1953). He was the first Native American to win a gold medal for the United States in the Olympics. Considered one of the most versatile athletes of modern sports, he won two Olympic gold medals in the 1912 Summer Olympics.

Look closely at the photo, you can see that he’s wearing different socks and shoes. This wasn’t a fashion statement. It was the 1912 Olympics, and Jim, an American Indian from Oklahoma represented the U.S. in track and field. On the morning of his competitions, his shoes were stolen. Luckily, Jim ended up finding two shoes in a garbage can. That’s the pair that he’s wearing in the photo above. But one of the shoes was too big, so he had to wear an extra sock. Wearing these shoes, Jim won two gold medals that day.

He lost his Olympic titles after it was found he had been paid for playing two seasons of semi-professional baseball before competing in the Olympics, thus violating the contemporary amateurism rules. In 1983, 30 years after his death, the International Olympic Committee (IOC) restored his Olympic medals with replicas, after ruling that the decision to strip him of his medals fell outside of the required 30 days. Thorpe is to date listed as co-champion in both the decathlon and pentathlon events according to official IOC records.

Thorpe grew up in the Sac and Fox Nation in Indian Territory (what is now Oklahoma). As a youth, he attended Carlisle Indian Industrial School in Carlisle, Pennsylvania, where he was a two-time All-American for the school’s football team under coach Pop Warner. After his Olympic success in 1912, which included a record score in the decathlon, he added a victory in the All-Around Championship of the Amateur Athletic Union.

In 1913, Thorpe signed with the New York Giants, and he played six seasons in Major League Baseball between 1913 and 1919. Thorpe joined the Canton Bulldogs American football team in 1915, helping them win three professional championships. He later played for six teams in the National Football League (NFL). He played as part of several all-American Indian teams throughout his career and barnstormed as a professional basketball player with a team composed entirely of American Indians.

From 1920 to 1921, Thorpe was nominally the first president of the American Professional Football Association (APFA), which became the NFL in 1922. He played professional sports until age 41, the end of his sports career coinciding with the start of the Great Depression. He struggled to earn a living after that, working several odd jobs. He suffered from alcoholism and lived his last years in failing health and poverty. He was married three times and had eight children, before suffering from heart failure and dying in 1953.