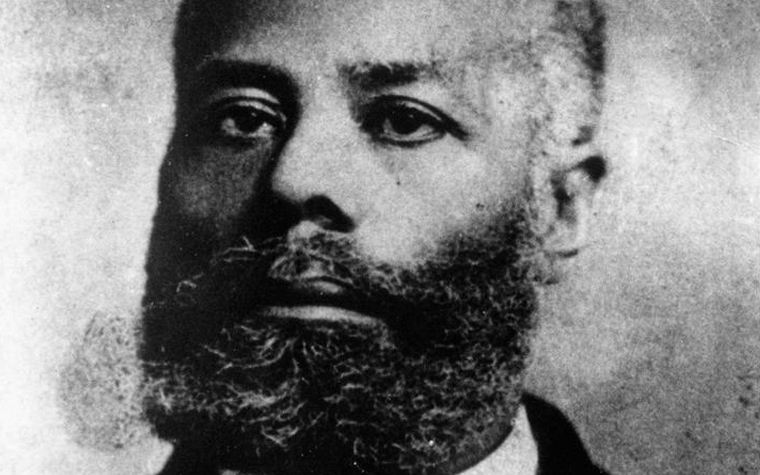 Elijah’s parents, George McCoy and Mildred Goins escaped enslavement in Kentucky by way of the Underground Railroad, arriving in Upper Canada in 1837. Following brief military service, George McCoy was awarded 160 acres of farmland in Colchester Township, where Elijah was born and raised. At the age of fifteen, Elijah McCoy left Canada for Edinburgh, Scotland, where he apprenticed for five years as a mechanical engineer. By the end of his career, he had registered over 50 patents.

After six years on the job, McCoy developed a device commonly known as an “oil-drip cup,” which administered a regulated amount of lubricant into the engine through a spigot. On 23 July 1872, he filed his first patent on the drip cup, registered under the title “Improvement for Lubricators in Steam Engines.” The innovation spread rapidly through the railroad business, as it enabled locomotives to work without interruption.

The following year, McCoy married Mary E. Delaney and moved to Detroit. He soon found work instructing mechanical engineers on the proper installation of his lubricator, and consulting with manufacturers such as the Detroit Lubricator Company. He also continued to design new lubrication devices for a variety of mechanical engines. His 1882 hydrostatic lubricator for locomotive engines, as well as his designs for ship engines, made a significant impact on the transport industry in the late 19th century. His most elaborate innovation, however, was the graphite lubricator, designed for “superheater” locomotive engines, which he patented in 1915 when he was 72 years old. Due to the immense heat generated by these new engines, a more viscous lubricant was required, which he developed by mixing graphite and oil. McCoy considered this to be his greatest invention. The engine, combined with the lubricator, drastically reduced the quantity of coal and oil used in train travel.

In 1923, Mary — by then known as a prominent activist for civil and women’s rights — passed away. McCoy’s health subsequently began to deteriorate and in 1928 he was committed to the Eloise infirmary, where he died a year later. By the end of his career, McCoy had registered over 50 patents. In September 2001 he was inducted into the National Inventors Hall of Fame in Akron, Ohio.

“The Real McCoy”
It remains unclear today whether Elijah McCoy is the original namesake of the phrase “the real McCoy,” but it is unlikely. Many have suggested that the phrase became common parlance among mechanical engineers who refused to install knockoff lubricators onto their locomotives, demanding instead the original McCoy design. However, parallel mythologies surround a number of other figures of the late 19th and early 20th century, including the Californian boxer Charlie “Kid” McCoy and Joseph McCoy, mayor of Abilene, Kansas. In fact, the phrase is first recorded in an 1856 Scottish poem mentioning “the real McKay” — a reference to the distilling company G. Mackay and Co., which adopted the phrase as a promotional slogan.