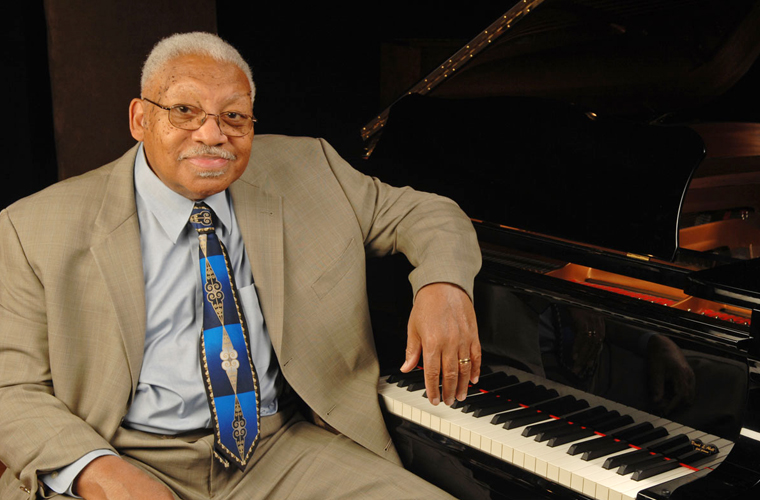 Jazz pianist and music professor Ellis Louis Marsalis, Jr., was born in New Orleans, Louisiana, on November 14, 1934. As a youth, Marsalis played clarinet. From the age of eleven, he studied clarinet at Xavier University’s Junior School of Music (New Orleans), a preparatory course for the university. He would later ask his mother to get him a tenor saxophone so he could begin playing Rhythm “n Blues, the popular music of the day. He added piano to his studies while still in high school.

Marsalis entered Dillard University (New Orleans) in 1951 as a Freshman music major. In 1955, Marsalis earned his B.A. degree in music education. For the next year, he worked as an assistant manager in his father’s motel business while continuing to freelance with the American Jazz Quintet which consisted of Alvin Batiste, tenor saxophonist Harold Battiste, Ed Blackwell on drums, and Richard Payne on bass. The group found little work in New Orleans, but they persevered.

In 1956, Ornette Coleman sent for Edward Blackwell to join him in Los Angeles and after a conversation with Harold Battiste, he and Marsalis decided to go with Blackwell to Los Angeles. While there, Marsalis and Blackwell played with Ornette Coleman for a short time. But by the end of the summer, Marsalis received a draft notice so he had to return home for a physical. In January 1957, he joined the U.S. Marine Corps for a two-year stint. Marsalis spent all of his military service stationed in southern California, where he played piano for a weekly CBS television show, the Marine-sponsored “Dress Blues,” and a radio show called “Leather Songbook,” also sponsored by the Marine Corps. After his military service, Marsalis returned to New Orleans and married Delores Ferdinand. Eventually, the two would have six sons: Brandford, Wynton, Ellis III, Delfeayo, Miboya, and Jason.

In 1964, Marsalis moved his wife and family to the small town of Breaux Bridge, Louisiana where he served as the band and choral director of Carver High School. In 1966, Marsalis returned to New Orleans and led the house trio at the Playboy Club. After leaving the Playboy Club, Marsalis was asked to join the Al Hirt band from 1967 to 1970, he had the piano chair in Al Hirt’s Dixieland group.

In 1974, Marsalis joined the staff at the New Orleans Center for Creative Arts High School (NOCCA), where he worked for the next twelve years. There, he would influence the careers of countless musicians, including trumpeter Terence Blanchard, pianist Harry Connick Jr., saxophonist Donald Harrison, and his four musician sons, Wynton, Branford, Delfeayo, and Jason. In 1986, Marsalis earned his M.M. degree from Loyola University New Orleans.

From 1986 to 1989, he taught at the Virginia Commonwealth University in Richmond, where he spent two years as coordinator of Jazz Studies. In 1989, Marsalis received an Honorary Doctorate degree from his alma mater, Dillard University, and that same year, he joined the faculty of the University of New Orleans. Marsalis served as Director of Jazz Studies until his retirement in 2001. He would be the recipient of honorary degrees from Tulane University (2007), The Juilliard School, Ball State, and Virginia Commonwealth University in 2010. Marsalis has served as a panelist, grant evaluator, and board member for the National Endowment for the Arts and the Southern Arts Federation. On December 7, 2008, Marsalis was inducted into the Louisiana Music Hall of Fame.