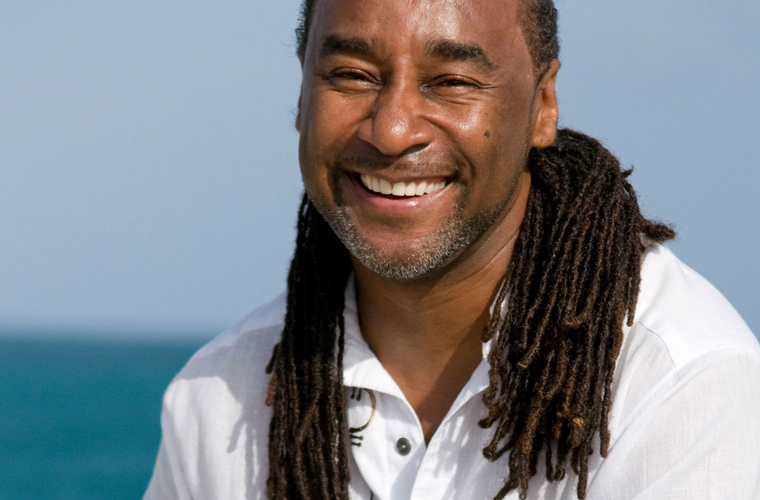 Eric Jerome Dickey was born in Memphis, Tennessee and attended the University of Memphis (the former Memphis State), where he earned his degree in Computer System Technology. In 1983, he moved to Los Angeles to pursue a career in engineering.

After landing a job in the aerospace industry as a software developer, Eric Jerome Dickey’s artistic talents surfaced, inspiring him to become an actor and a stand-up comedian. Yet Eric quickly found out that writing was something he could do and do well. From creative writing classes to avidly consuming the works of his favorite authors, Eric Jerome Dickey began to shape a writing career of his own. Having written several scripts for his personal comedy act, he started writing poetry and short stories. “The film work gave me insight into character development, the acting classes helped me understand motivation…All of it goes hand in hand,” Eric explains. He joined the IBWA (International Black Writers and Artists), participated in their development workshops, and became a recipient of the IBWA SEED Scholarship to attend UCLA’s Creative Writing classes. In 1994 his first published short story, “Thirteen,” appeared in the IBWA’s River Crossing: Voices of the Diaspora-An Anthology of the International Black Experience. A second short story, “Days Gone By,” was published in the magazine A Place to Enter.

With those successes behind him, Eric Jerome Dickey decided to fine-tune some of his earlier work and developed a screenplay called “Cappuccino.” “Cappuccino” was directed and produced by Craig Ross, Jr. and appeared in coffee houses around the Los Angeles area. In February 1998, “Cappuccino” made its local debut during the Pan African Film Festival at the Magic Johnson Theater in Los Angeles.

Short stories, though, didn’t seem to fulfill Eric Jerome Dickey’s creative yearnings. Eric says, “I’d set out to do a ten-page story and it would go on for three hundred pages.” So Eric kept writing and reading and sending out query letters for his novels for almost three years until he finally got an agent. “Then a door opened,” Eric says. “And I put my foot in before they could close it.” And that door has remained open, as Eric Jerome Dickey’s novels have placed him on the map as one of the best writers of contemporary urban fiction.

Eric Jerome Dickey’s book signing tours for Sister, Sister; Friends and Lovers; Milk in My Coffee; Cheaters; and Liar’s Game took him from coast to coast and helped propel each of these novels to #1 on the “Blackboard Bestsellers List.” Cheaters were named “Blackboard Book of the Year” in 2000. In June 2000, Eric Jerome Dickey celebrated the French publication of Milk in My Coffee (Cafe Noisette) by embarking on a book tour to Paris. Soon after, Milk in My Coffee became a bestseller in France. Eric Jerome Dickey’s novels, Chasing Destiny, Liar’s Game, Between Lovers, Thieves’ Paradise, The Other Woman, Drive Me Crazy, Genevieve, Naughty or Nice, Sleeping with Strangers, Waking with Enemies, and Pleasure have all earned him the success of a spot on The New York Times bestseller list. Liar’s Game, Thieves’ Paradise, The Other Woman, and Genevieve have also given Dickey the added distinction of being nominated for an NAACP Image Award in the category of Outstanding Literary Work in 2001, 2002, 2004, and 2005. In 2006, he was honored with the awards for Best Contemporary Fiction and Author of the Year (Male) at the 2006 African American Literary Award Show. In 2008, Eric was nominated for Storyteller of the Year at the 1st annual ESSENCE Literary Awards. In January 2001, Eric Jerome Dickey was a contributor to New American Library’s anthology Got To Be Real: Four Original Love Stories, also a Blackboard Bestseller. He also had a story entitled “Fish Sanwich” appear in the anthology Mothers and Sons. In June 2002, Dickey contributed to Black Silk: A Collection of African American Erotica (Warner Books) as well as to Riots Beneath the Baobab (published by International Black Writers and Artists of Los Angeles in April 2002). His books have held steady positions on regional bestseller lists and have been featured in many publications, including ESSENCE, The New York Times, The Washington Post, and The Los Angeles Times. Dickey’s last novel, Pleasure, held true to form and landed on bestseller lists for The New York Times, USA Today, and ESSENCE.

Eric Jerome Dickey is also the author of a six-issue miniseries of comic books for Marvel Enterprises featuring Storm (X-Men) and the Black Panther. His novel Naughty or Nice has been optioned by Lionsgate Films.