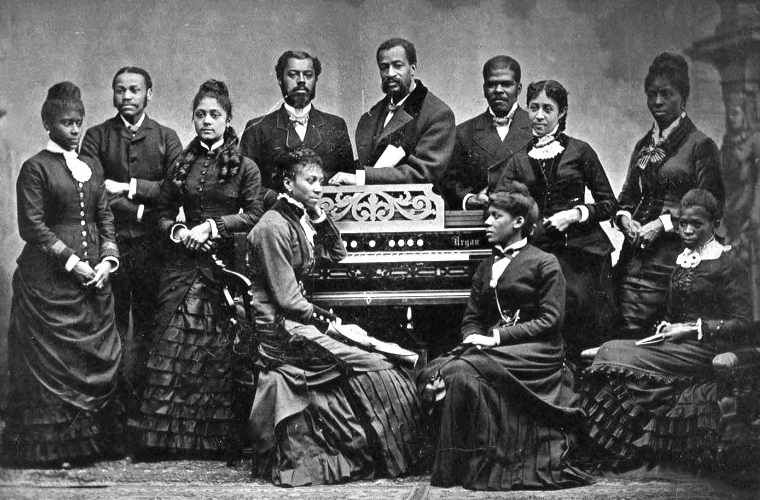 Fisk Jubilee Singers, a group of African American singers established (1871) at Fisk University in Nashville, Tennessee. It is one of the earliest and most-famous Black vocal groups, known for the performance of what was first called slave songs and later became known as African American spirituals.

Originally known as the Fisk Free Colored School, Fisk University was established in 1865 to educate formerly enslaved people. Classes began the following year, and the school operated on a small budget provided by its sponsor, the American Missionary Association. By 1871, however, Fisk was severely in debt. That year George L. White, the school’s treasurer, and a music professor established a choral ensemble of students in the hopes of raising money. The nine-member group—five women and four men—embarked on a national tour that initially struggled. During that time, White named them the Jubilee Singers, a reference to the biblical “year of jubilee,” in which all those enslaved were to be set free (Leviticus).

As the tour moved to the Northeast, the group began to gain a reputation among both white and Black audiences not only for the incredible voices of its members but also for their musical selections. The Fisk Jubilee Singers frequently sang spirituals that were rarely if ever heard outside Black churches or homes. Through the group’s performances, religious and inspirational songs born of the African American experience were not only publicized outside Black communities but eventually came to be seen as legitimate musical forms.

In 1873 the Fisk Jubilee Singers, now featuring 11 members, embarked on a tour of Europe, and, while in Great Britain, they performed before Queen Victoria and Prime Minister William Gladstone. Using proceeds from the highly profitable tour, Fisk built Jubilee Hall. The school’s administration subsequently arranged more-rigorous fund-raising tours, which left the singers exhausted, and in 1878 the group disbanded. A year later, however, a second group with additional new members was established. The Fisk Jubilee Singers resumed touring in 1879, and various versions of the ensemble continued to perform into the 21st century. The group was inducted into the Gospel Music Hall of Fame in 2000. The Fisk Jubilee Singers went to Ghana, the location of a major port for the transatlantic slave trade, for the first time in 2007 to celebrate that country’s 50th anniversary, and the following year the ensemble was awarded the National Medal of Arts.