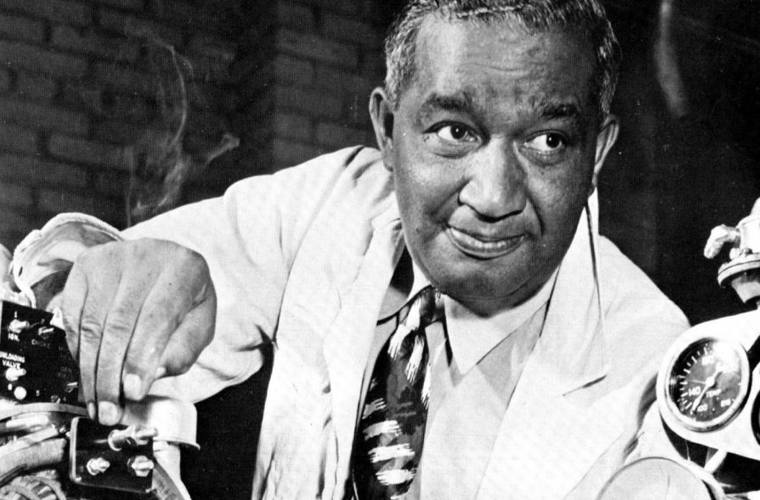 Frederick Jones was born in Ohio in 1893. After a challenging childhood, he taught himself mechanical and electrical engineering, inventing a range of devices relating to refrigeration, sound, and automobiles. Portable refrigeration units developed by Jones helped the United States military carry food and blood during World War II. Jones died in Minneapolis, Minnesota, on February 21, 1961.

Frederick McKinley Jones was born in Cincinnati, Ohio, on May 17, 1893, to a white father and black mother. His mother deserted him when he was a young child. His father struggled to raise him on his own, but by the time Frederick was 7 years old, he sent young Jones to live with a priest in Kentucky. Two years later, his father died. This living situation lasted for two years. At the age of 11, with minimal education under his belt, Jones ran away to fend for himself. He returned to Cincinnati and found work doing odd jobs, including as a janitor in a garage where he developed a knack for automobile mechanics. He was so good, he became foreman of the shop. He later moved on, again taking odd jobs where he could. In 1912, he landed in Hallock, Minnesota where he obtained a job doing mechanical work on a farm.

Frederick Jones had a talent for and an interest in mechanics. He read extensively on the subject in addition to his daily work, educating himself in his spare time. By the time he was twenty, Jones was able to secure an engineering license in Minnesota. He served in the U.S. Army during World War I where he was often called upon to make repairs to machines and other equipment. After the war, he returned to the farm.

It was on the Hallock farm that Jones educated himself further in electronics. When the town decided to fund a new radio station, Jones built the transmitter needed to broadcast its programming. He also developed a device to combine moving pictures with sound. Local businessman Joseph A. Numero subsequently hired Jones to improve the sound equipment he produced for the film industry.

Jones continued to expand his interests in the 1930s. He designed and patented a portable air-cooling unit for trucks carrying perishable food. Forming a partnership with Numero, Jones founded the U.S. Thermo Control Company. The company grew exponentially during World War II, helping to preserve blood, medicine, and food. By 1949, U.S. Thermo Control was worth millions of dollars.

Over the course of his career, Jones received more than 60 patents. While the majority pertained to refrigeration technologies, others related to X-ray machines, engines, and sound equipment.

Jones was recognized for his achievements both during his lifetime and after his death. In 1944, he became the first African American elected to the American Society of Refrigeration Engineers. Jones died of lung cancer in Minneapolis, Minnesota, on February 21, 1961.

In 1991, President George H.W. Bush awarded the National Medal of Technology posthumously to Numero and Jones, presenting the awards to their windows at a ceremony held in the White House Rose Garden. Jones was the first African American to receive the award, though he did not live to receive it. He was inducted into the Minnesota Inventors Hall of Fame in 1977.